Should You Summon? Dragon Special 3 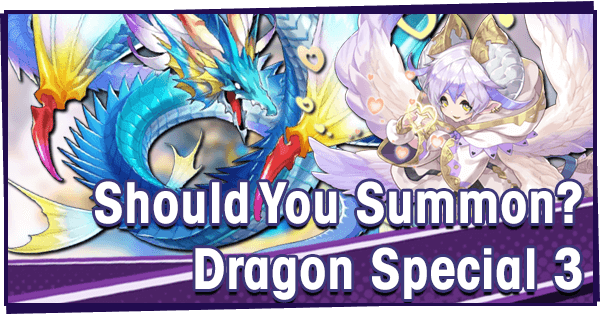 Disclaimer: The opinions below are written by GamePress and do not actually reflect Nintendo, Cygames, or the fairy Notte's opinions... probably. If they do, it's just a coincidence!

Although the theme is familiar, this banner has a brand-new combo of Dragons featured! Three are sharing the spotlight-- Cupid, Leviathan, and the scary Garuda.

You think Garuda is scarier than Leviathan?

Leviathan can't knock me out of the air with just a flutter of wings! All he does is summon a giant tidal wave and inflict Bog.

A recent announcement from the Dragalia Lost team revealed that Wyrmprints are going to be entirely removed from Summoning on April 25th. This does not affect the overall rates for each rarity, so it means the probability of pulling something good (a Dragon or Adventurer) is that much higher!

Instead of summoning, Wyrmprints will be buyable in a shop with Eldwater. On top of that, Eldwater amounts for pulling dupes will increase!

This is also retroactive, so any dupes pulled before the change will be counted towards a refund sent to your inbox.

Holy smokes! That's amazing! Why even pull on this banner?

Dragon Summon Specials tend to be among the best banners in Dragalia Lost, outshone only by Gala Banners.

But Should You Pull? NO

Although the drops are excellent, the anticipated Eldwater changes and chance of dupes make this a skip. For those lacking all four featured 5★ drops-- Xainfried, Leviathan, Cupid, and Garuda-- it's a good value, but otherwise, save up and wait for the new Adventurer rates.

Leviathan, Ruler of the Seas

Thanks to the double Wyrmprint update, a lot of the earlier problems adventurers like Lily experienced in HBH are null and void. Leviathan now reigns supreme as the DPS dragon of choice for those looking to clear HBH (and the new Void Agni fight!). It’s not just because of his strength bonus however, but also because of his exceptional attack frames and reliable Bog.

The pretty boy isn’t quite as amazing as Leviathan, but that’s mostly because there is currently no Shadow content that needs such a powerful dragon. His MUB 60% strength bonus is massive, and he’s also superior to the 4★ Lindworm in his attack frames. Sadly, Cupid’s stat line is a more balanced one, which doesn’t do him any favors. He’s still the #1 light DPS dragon though, and while that may be overkill in the moment, those planning for High Zodiark may want to pick him up.

And our last featured dragon, Garuda!

Garuda has one purpose, and one purpose only: Turn Lowen into a healing monster. Sadly, her Tempestuous Kiss restores HP to only her wielder, unlike Verica’s best buddy Phoenix. Her attack frames are not great, but you don’t pick Garuda up to deal damage, so that’s forgivable. She does have the benefit of having one of the better HP stat lines, which is of course befitting her intended purpose. Only go for Garuda if you plan to use Lowen in harder content (like the soon to arrive High Mercury), but if that’s your aim there is nothing better.

A brief word on the 4★ Dragons

Poli’Ahu is not the best-- being a mixed-stat dragon-- but Roc and Lindworm are decent pulls. Either of them will grant huge Strength boosts, especially when max unbound, so rejoice if they come home!

• 5★ Focus Adventurer rates are at 0.5%, occupied only by Xainfried.

On to the Adventurers!

Once more the dragon banner features Xainfried. He’s a solid choice for High Brunhilda-- his ability is a virtual requirement, though not as much now with double prints patching a lot of holes. Still, having him around with 50/50 circles can give a run a lot more breathing room. In an amazing plot twist, he’s actually a decent “melee” Adventurer for Void Agni thanks to the fact he can safely stay out of the ring of fire for most of the fight, though he’s still susceptible to Stun and doesn’t have the dull resist weapon.

Thaniel? The solo water 4★ healer get’s a rate up this banner! He’s required for HBH and for Void- Wait? What’s that? This just in folks: Thaniel is GARBAGE at Void Agni. Rival High Dragon Healers Verica and V!Hilde have proven that they are MUCH more effective at this fight, because their HOTs and second skills that are not terrible are way better at keeping melee alive in this fight and they have stun resist (even Ricardt is better, but if you’ve already invested in a stun res healer there’s no need to build a new one now). Plus, you get to use Phoenix, who beats the pants off of any water dragon a healer could use. So yeah. Pull for Thaniel if you want to heal HBH, because until something better comes along (and it won’t take much) Thaniel is really good at that one fight. And pretty much nothing else.

Sorry, Thaniel. You are still a great character with a talented voice actor.

...Wait, there aren't any featured Wyrmprints for this banner, are there?

If you need a dragon for HBH or HMC (and wouldn’t mind a Cupid) and are willing to run the risk of getting pity broken by a random wyrmprint, pull hard on this one. You could chase Xainfried (or Thaniel, and he’s actually a pretty compelling reason to pull if you have no water healer and no Verica or V!Hilde), but this is a dragon banner, and adventurers are not exactly a likely result. There is additionally the FEH collab to consider, but as always we can only analyze the present, and for clearing content it’s truly hard to beat a 5★ gatcha dragon.

Remember the Dragalia Digest? The FEH event has been announced and may be arriving in the near future. It could feature limited characters, so fans of the IP should save their Orb-- er, Wyrmite to pull here instead!