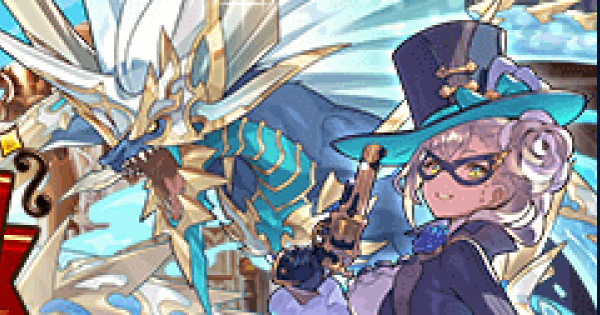 What, Poseidon? I've already got one! He's not even that good you know, there's tons of cooler dragons than him, I don't know why you'd bother, he's just a HOLY GUACAMOLE! Did they give this boy steroids or something!?

Let Me Sing You the Song of My People

Wait, seriously, this is the disguise that fooled Euden? Geeze, pass out some groucho marx glasses and that boy wouldn't even recognize Zethia.

Lapis is the first Mana Caster in water, and is a "rapid fire" version. She's alright, but she suffers from a crippling problem: she is not Karina. Now I know this is me being down on her, as I'm dead broke and she had to use a Light manacaster in my playtesting, but I honestly don't see how she can compete with the quad Karina comp that, to the surprise of absolutely no one, is utterly dominating Master Ayaha and Otoha. I suppose she could find a home in solo mode, but currently it seems Karina (shocking!), Grace (what a twist!) and Pipple, Fjorm, and Summer Celliera are all preferred because they're tanky and do well in double buff spam groups. Lapis is good and has potential, but as Hunter Sarisse and Xainfreid can attest, good solo DPS isn't all that great in the days of double buff spam groups. Synergy is far more important.

That said, Lapis does have one thing going for her that would REALLY make her worth pulling for, which is an easily accessible dispel in Water....if Grace didn't exist. It still gives Lapis something to do and makes her a decent enough choice, and if her DPS is high enough I could see her being used more, but currently Water doesn’t have any content where a dispel is a high priority, and Grace is sort of the go to dispeller for every element.

It is true that Lapis’s S2 scales with buffs, though she prefers Stronger Bullets, her own mechanic. That could be enough to make her worth bringing, but her lack of innate healing that Karina has and her lack of own buffing ability makes me question that. Her Strong Bullets mechanic is one where if she dispels a buff she gets a “Stronger Bullets” buff, and the Twins do put up a buff frequently enough that this could have some merit. This increases her crit by 4%, and can soup up her S2 before being consumed.

Verdict: Maybe. Strong potential DPS and a ready dispel is a useful kit, but it’s not enough for me to consider Lapis a must have.

The worst part about Gala Poseidon is he makes me do math.

Math isn't my strong point, but based on some calcs I've seen, Gala Poseidon works out to  an ~104% increase to damage done to Flame enemies, maybe a bit less due to slight downtime at the start of a fight. So, that's pretty nuts. Also, he uses his skill when you shift out, which is also pretty cool. I honestly don't know what else to say. Water had to get a pretty bonkers dragon to replace Big Chungus as the top of the heap, and I think Poseidon gets there. Yes, in some cases, Big Chungus is still better, but an awful lot of Adventurers are going to want to use Gala Poseidon.

Verdict: Yes. Gala Poseidon has some of the highest aura benefits we've ever seen and is frankly insanely powerful.

On the Platinum Summon

If there was ever a time to spend diamantium outside of a Dream Summons, this is it. It doesn't matter which of the Gala Dragons you get. Unless you're even more of a whale than I am, you don't have multiple MUB Gala Dragons just lying around. Even if you were to pull say, three Gala Thors and you already had a Gala Thor, that's still amazing. Sure, it's arguable you'd be better off with Daikokuten, but do you have three or four of those MUB? Any of these dragons is a serious powerhouse, and I would be happy with any number of pulls from 1-3, and be tickled pink to get any combination of the dragons because they are one and all amazing. It's not worth breaking the bank over and if you're committed to F2P and skip dream summons don't feel the need, but if you do buy packs, this is the sort of thing to spend on.

Verdict: Yes. If you are going to spend, this is what you want to be spending on.

This is a Gala Banner. Gala Poseidon is limited to Galas, everyone else is not.

Final Verdict: I'm going with Yes. Gala Poseidon is great, and Lapis is at least an interesting pick.

This is a decent enough Gala Banner to pull on, and I'd go in for Poseidon if you want to. If you already have Big Chungus he's not quite as tempting, but he's still fantastic. Lapis is at least a reliable dispeller in Water, which is worth picking up on the way to Poseidon but maybe not chasing on her own.