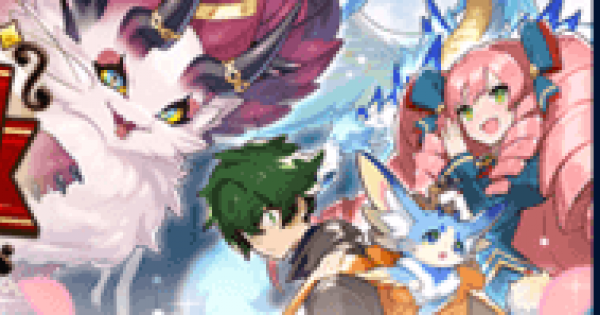 Holy smokes, why did no one tell me we were having a crossover with my favorite Anime!? Crap crap crap, I’ve got to get everything ready for this PLUS ULTRA Gala Dragalia!

The Dark Side is my ally!

Oh man, Deku is like, seriously the coolest! I’m a bit disappointed we got Hatsume instead of Uraraka, because Green Tea is my OTP and-wait, what do you mean, this is a Gremlins Reference? That’s a stupid movie from like a billion years ago! Oh whatever. I’m not putting away my All Might hoodie though.

Bringing a much needed boost to the water roster, Not-Deku has an interesting Chess Motif going on. Essentially, he operates primarily as a buffer for most of the quest, dropping a buff zone that gives 20% Strength similar to Gala Euden, though it deals no damage on its own. Each additional activation adds an effect, first 8% Flame Res, then 15% Crit Damage. The third time also gives Eugene Check, which allows him to use his S2. You can store up to two Checks, but more will be lost.

Check itself is a hard hitting attack, and seems like it’s supposed to pair with Styx, the Water dragon on this banner. I’d suggest using Gaibhne or Levithan instead, but over all the kit is solid. Eugene provides great support, though not quite as good as Gala Elisanne, but you can easily use both of them together.

On a normal banner, I wouldn’t recommend pulling for Eugene, and even here I would say don’t target, but he’s a very strong Adventurer and certainly worth getting.

Verdict: Maybe. While I wouldn’t pull specifically for Eugene, this is a Gala and I’d be very happy to pick him up while pursuing the real prize.

Look, I’m just going to call her Hatsume. I know her name is actually Catherine but I was seriously pumped for a BNHA crossover and now I’m just kinda salty.

Between the two new Adventurers on this banner, Catherine is the more selfish one, and thus is probably not quite as good as Eugene in general, though she’s still pretty good. Her main gimmick is that she doesn’t attack herself, instead summoning Men In Black to do her dirty work for her. Some would even say she has super cute babies to help her out because they look like robots, but who am I to judge? Anyway, Catherine doesn’t attack in the manner of a regular Lance, and actually functions more as a ranged Adventurer, which is pretty nifty.

Her S1 gives Catherine a 20% Strength Buff for 10 seconds and a stacking buff called “Perfect Escort.” This buff stacks, and will increase her damage from all attacks based on the number of stacks. It’s really important for Catherine to avoid damage, as while the stacks do make her harder to kill, taking damage will remove a stack. You want to get them as high as possible before unleashing your S2, as it can do truly mind melting amounts of damage with high enough stacks, and with the right combination of buffs and debuffs on the boss, you can totally shred a health bar with one move.

The problem lies in that needing to avoid damage, and the fact that it takes a whopping 23400 SP to charge up Cathrine’s S2. Even using Gaibhne or some wyrmprints to speed this up doesn’t solve the problem totally, as without those stacks of Perfect Escort Catherine’s S2 really isn’t going to be doing those big numbers.

Still, Catherine’s pretty decent, and her play style is fun. I would normally give her a no, but if you do want to go in for her, this is a great banner to do it on and she’s quite fun to play in my experience.

Verdict: Maybe. While on her own Catherine isn’t super special, she’s fun to use and this is a good banner to summon on regardless.

Sweet, it’s All Might! Or at least, that’s what Galex and Gleo become when you get Cat Sith. UNITED ANCIENT RAY SMASH!

Yes. This is why you should summon on this banner. You can ignore basically all that text on Cat Sith and walk away with this: 180% Skill damage. Someone notify Shinobi’s next of kin, because that dragon is DEAD!

Technically, it’s only for 15 skills, and then you need to get more 180% Skill Damage Boost, but that’s not reality. Look, even assuming you somehow managed to use 15 skills before the boss exploded (and right now, that is not happening, even off Element) you can get more 180% stacks really easily, as 25 Combo is not hard to achieve, and shapeshifting gives a whopping 8 additional sticks of dynamite.

I thought Gala Mars was power creep, but this is frankly nuts. Cat Sith is so far beyond every other dragon I’m going to have to make a new tier in the Dragon Tier list because her and Mars are just so much better than their competitors you can’t even compare them. Sure, you can still use Shinobi and clear current content. But Sith is so much better.

And that’s not a story a Jedi would tell you.

I’d make a joke about an 80s rock band but they already made a Gremlin Joke and my producer tells me I’m only allowed one dated reference per Should You Summon Guide.

Styx is bad. Maybe you could pair Styx with Eugene or Catherine, as that seems to be how Styx was designed, but that’s silly. Other Water dragons are better. Even good old Leviathan is better thanks to the reliable bog.

Verdict: No. If you get a Styx, think of it as free Eldwater.

This is a weird banner. Gala Cat Sith is limited, everyone else is not. Gala Rates Apply.

Final Verdict: Yes. This is not Power Creep, this is Power PLUS ULTRA.

Mars set the bar for Gala Dragons pretty high. Cat Sith saw that bar, said it was for sissies, and launched herself over it using a series of explosions while cackling and screaming DIIIIEEEEEE!

Oh, and Eugene and Catherine are OK too. Styx is bad though.