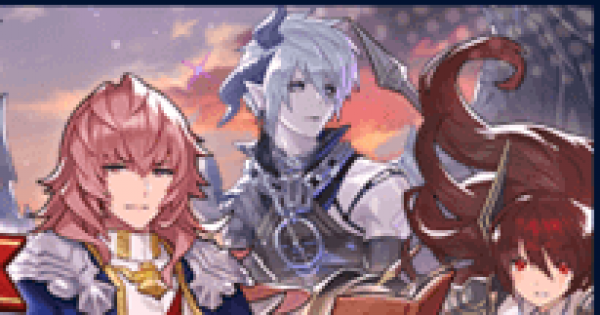 If Cygames is going to do lazy titles, so am I.

Well, Alfonse and Sharena have left again, but don't worry, I'm sure they'll be back again soon. As for now, we have some more old friends to welcome to the Halidom! At least I think they're old friends by the way you're all acting. I've never seen these people before.

Wow, seems like Dragons are really this gal’s Forte. I hope she doesn’t make a Fatalis mistake and pick the wrong one though.

As yet another Shadow Attacker, Forte exists in the shadows of giants like Galex, Gleo, Bellina, and even Vice. It’s going to take a lot for Forte to carve out a place for herself in the meta, so can she do it?

Short answer: Not really. Forte has a good kit, and what COULD be a really great Co-ability in Shadow Dragon Claws, if it weren’t for the fact that currently none of Shadow’s content lasts long enough for a ramp up playstyle to matter when the boss is nuked as quickly as possible and typical clears don’t give you enough time to get to three Dragon shifts (and occasionally, only a single one is possible if you’re really going fast). Which is really too bad, as her D-Prep passive would be a great way for her to gain access to those boosts quickly. As is, her passives are decent, but Forte can’t really take advantage of their full potential.

The rest of Forte’s kit is the standard Poisoned Punisher one we’ve come to expect, though she has no way of inflicting Poison herself. Her S1 has decent damage mods against unpoisoned foes and excellent ones against Poisoned ones, and is very spamable at only 2300 SP. Her S2 isn’t that expensive either at 5300 SP, and not only does it hit like a truck, but it also gives her a 20% Strength buff. Combined with her 30% Poison Punisher passive, and Forte is a pretty great selfish attacker with a neat ramp up style play.

Of course, the real problem is that Shadow is broken. Compared to Galex, Forte just doesn’t stack up, and with her ramp up style of play she can’t even compete with someone like Vice who blasts out of the gate. Eventually, when we get Master Kai, she could prove to be powerful there, but that’s months and months away, and unless your Shadow roster is so barren you don’t have Vice or even Althemia, there’s no reason to pull for Forte.

Verdict: No. This is a non-limited strong Shadow unit. Those are a dime a dozen and there’s no reason to throw wyrmite after Forte here.

Wow, we’re really doing this? I mean, it’s pretty obvious a lot of the girls have had this in mind for Elisanne for a long time, but here I thought-oh, wait, not yuri us, Yurius? I see. Well, never mind.

You know how Water has been waiting for a strong ranged DPS that isn’t an overgrown cucumber? Well, he’s here now. Yurius might be one of the first Water Adventurers to break through the glass ceiling Cygames has imposed over the element for a while now. He’s got an excellent Dragon Drive and Frostbite punisher kit, and best of all he’s ranged, which is what the current Flame maps (IE, HBH) favor.

His passives are, of course, his Drive, which also increases his Skill Damage by 35% and gives him 30% Dragon Haste, which are both really excellent. He has Dragon Haste as his chain so he can spend even more time in his drive, and it all adds up to a really solid kit.

So, that must mean Yurius is worth summoning for, right? Well, sort of.

The thing is, while we know Flame Agito is coming, it’s not going to be here for a little while yet, and while Yurius is rather well positioned to succeed in HBH, there’s also no real need to pull heavily right now to clear what is at this point nearly obsoleted content. Don’t mistake me, he is quite good, it’s just that it’s at best questionable to pull for content that isn’t out (and thus we have no way of knowing if Yurius will be good, or if he’ll be totally obsoleted by upcoming mana spirals or new Adventurers). As for current content, kitting out OG Elisanne is a more than sufficient path to clearing HBH. And she’s free.

Verdict: Maybe. Yurius is really one of the best Water Adventurers we’ve seen, but there is a dearth of content.

For a guy who keeps talking about how he won't lose to his father, Thaniel seems like someone who gets beat up a lot.

Thaniel is so bad I can't even think of a joke. Maybe he'll be good when he gets a spiral.

Haha, who am I kidding? Even with a spiral Thaniel will still be bad.

Verdict: What do you think?

Azazel keeps talking about how he’s been unsealed and must now spread his dark truth, but I just think he’s been listening to edgy music and writing poetry in his room.

At long last, Shadow gets a support/healer focused dragon. Azazel is everything that Grace or Cleo players have wanted to improve their contribution to the team, with 30% HP and 35% Skill haste. That makes him a clone of Freyja/H!Mari, but those are frankly the best support Dragons in the game.

Best of all, like H!Mari, Azazel has a really sweet active skill, which basically gives 15% Poisoned Punisher to your team for 40 seconds. That’s pretty sweet, and it also works perfectly with Hawk, who along with Grace, is an All Star member of the Dragalia Cheese Club. His personal attack damage mods aren’t that great, but you’re not going to usually put him on an Adventurer that’s all that concerned with their personal damage anyway so that’s not really a major drawback.

That said, we’ve now seen that Cygames is ready to unleash a wave of Gala Dragons that absolutely blow everyone else out of the water. I can’t promise that Shadow is going to get their Mars equivalent anytime soon, but unless you are in desperate need of a Dragon for Grace right now, this is an easy pass.

Verdict: Weak maybe. Grace mains or players looking to solo content at the bleeding edge will likely want him, but aside from that there’s no need to rush out to get Azazel.

This is not a limited banner. All units are going into the permanent pool.

Final Verdict: No. This is a non-limited banner and nothing here is game breaking or radically going to alter the meta. You can wait on this one.

While none of the offerings here are bad per se, there is absolutely no need to go ham to acquire the featured units on this banner. If you absolutely must, do know that both Yurius and Azael are qutie good in their respective roles and even Forte is at least decent. However, this is also a safe banner to skip and just wait to see what is around the corner. Take your free summons, and plan for the future.