Ezelith weapon
@HaughtyWillow4863 wrote: Training ezelith for dragon…
Advice please
@raygart wrote: Hello everyone, I started playing this game…
Doublebuff
@saddio wrote: For the strength buffs that proc when a…
Which of the free chars are worth investing on?
@dumbass wrote: i need to unlock 10 mana nodes for one of…
How do you guys feel about Durant
@supersoren wrote: Im not the oldest player here by a long…
Read More
GamePress
Featured Update Content Update: 1/21/2020 - Void Battles - Proud Manticore Strike

Should You Summon? Visions of Amity 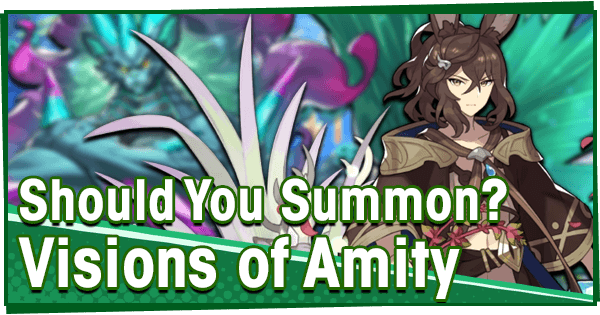 Disclaimer: The opinions below are written by GamePress and do not actually reflect Nintendo, Cygames, or the fairy Notte's opinions... probably. If they do, it's just a coincidence!

It's time for another Summon Event! And it looks like Sylas is going to join us after all, Euden!

Really? Wow! I bet that’s going to make a lot of people happy!

Yeah, I just have one problem with the guy.

Oh, what's that? He seems so nice!

It's because he has no chill! Get it? Because he has Freeze Resistance?
...
Well, I thought it was funny, anyway.

A recent announcement from the Dragalia Lost team revealed that Wyrmprints are going to be entirely removed from Summoning on April 25th. This does not affect the overall rates for each rarity, so it means the probability of pulling something good (a Dragon or Adventurer) is that much higher!

Instead of summoning, Wyrmprints will be buyable in a shop with Eldwater. On top of that, Eldwater amounts for pulling dupes will increase!

This is also retroactive, so any dupes pulled before the change will be counted towards a refund sent to your inbox.

This is the last banner with Wyrmprints in it, folks! They’re rated down to .5% and none are featured, but they’re still here, ready to pity break you at a moments notice. Once this banner ends, they’re out of the pool, and into the store! I would wait to pull until then, since prints are a consolation prize and not what we’re really after.

Sylas is powerful, but there is no demanding content for him at this time. Maribelle is really good, and potentially strong for High Mercury, but shares the banner with Sylas and we're not sure how the meta will shake out yet.

A new wind lance 5★, and just in time for High Mercury! Unfortunately, someone forgot to tell Sylas he should have brought Bog resistance, not Freeze! Still, Sylas has a few things going for him. First, he’s a powerful lance user that brings a LOT of buffs to the table, and synergizes well with adventurers like Louise who also rely on Poison for their kits. Sylas’ first skill deals line damage, reduces their strength by 10%, and inflicts Poison. That’s a pretty nifty ability, and his second is even better at support. First, he gives 20% skill haste for 15 seconds (which is a really nice long time for a buff) and he either increases strength or defense by 20% for 15 seconds, or HP for the rest of the quest. Now, obviously the strength is going to be the preferred buff, but the HP boost is nothing to sneeze at, especially with Lowen around also boosting HP.

Sylas also gets HP 70% = Strength +13%, which is a pretty monster boost when above that threshold. Unfortunately, his other two abilities are pretty poor in the current meta. Last Recovery IV might help him keep that strength up, but the fact that it triggers only once per quest means he’s probably going to still want a healer to support him to maintain his strength buff. The most crippling part of the kit though is the Freeze resistance. Currently, there is no hard content in the game that requires Freeze resistance. The hardest content would be an event master challenge that inflicts freeze, but that’s an if and when question. Water IO is generally considered to be one of the most painful to solo or auto, but it also doesn’t require an adventurer of Sylas’ strength to manage. Still, with the pattern Void Battles have been following with status afflictions, Freeze Res very well may be the thing to have against a Water boss. Perhaps Void Leviathan is on the way?

Forgive me, Sylas! Your fans will still love you, and are rejoicing now that you're finally playable.

Maribelle: Child of the Forest

Wow, I can’t believe it’s Maribelle's first banner! She’s a powerful wand user, who unlike Sylas has bog resistance, making her well suited for High Mercury. It’s too soon to say what builds Maribelle will use successfully in the new trial, or what level of investment she’ll need. What is known is that Maribelle has fantastic DPS and a powerfully offensive kit. She’s got two hard hitting skills, the first of which gives the enemy a defensive debuff. Both have good AOE utility as well.

Aside from her DPS, Maribelle doesn’t contribute a lot to the group support-wise, and her first ability requires her to have full HP to get her 40% skill damage buff, meaning she requires healer support and very skillful dodging to get the most out of her. Mercury looks to have several instances of unavoidable damage, meaning that Maribelle won’t be at peak performance the entire fight, and will need good timing to successfully maximize her damage. All that said, she’s still a really solid wind DPS that is worth pulling for. However, it would be wise hold off on pulling if you plan to use her to clear High Mercury until we understand what the meta for that fight will look like.

A girl with her priorities straight, Yue always has a bite to eat, and she’s never tired thanks to her Sleep resistance! As a 4★ Axe user, Yue shares a weapon type with Vanessa, but their play styles couldn't be more different. Whereas Vanessa is a hard hitting brawler, Yue is a defensive Adventurer with abundant self-sustain. Let’s take a look at Yue's kit: she’s got a basic melee damage skill in Knockout Blow that also stuns, but it’s her second skill, Wild Instinct, that’s interesting. This skill turns Yue from a tank to a berserker for 20 seconds with +20% crit who can also heal herself for 3% of her damage. However, it also lowers her defense by 40%, so it’s not really an emergency heal.

Yue’s other abilities are Last Defense +60%, which is risky to trigger but has incredible magnitude. Her second ability is recovery potency +8%, which is great for Staff users but sees less mileage on a self-heal.

In the end, while Yue may be great at parties, she’s not who you want to bring to current challenging content, which is a race against the clock, not a test of endurance and survival. Don’t pull for Yue now, as she’s not going anywhere.

While Pazuzu is very useful for certain Adventurers, he's a niche dragon that is outshone. Stribog is boring but practical, but you shouldn't try to MUB through this lackluster banner.

This is one cat who knows where it’s at! The Poison, that is. Pazuzu is a 5★ dragon that brings a nice 50% strength boost, and has poisoned punisher +20%. He’s also got an ability that inflicts Poison himself, though it can’t be relied upon to keep his ability active due to the long delays between dragon Shapeshifts. So how good is Pazuzu? Well, for adventurer’s like Louise, Elenora, and of course banner mate Sylas, Pazuzu is the best DPS dragon against enemies vulnerable to Poison.The problem, of course, is that some bosses are immune to poison, and being best in slot for only those who have poison in their kit is a very narrow speciality. You’re better off using a dragon like Zephyr, who has applicability for all of your wind stable, and also deals plenty of damage even against Stun-immune targets. Again, I’m going to have to say that you should pass on pulling for Pazuzu.

Sorry puss! I guess you were just too toxic for our relationship.

A good 4★ budget option for those who want to use Lowen, but don’t have Garuda. Other than that, as a 30-45% HP dragon Stribog doesn’t have much use, especially since his skill draws in enemies towards him-- something a healer like Lowen would prefer to avoid.

No featured Wyrmprints here! But they're out there somewhere, ready to swoop in and break your pity rates just when you were about to summon your favorite Adventurer or Dragon, one last time. Pass!

The Wyrmprint rate has been set to 0.5%, and there are no featured prints, or new prints. With that said, the prints are being banished from the summoning pool once this banner ends, and frankly that's where they belong. You shouldn't pull on this banner in large part because the prints are still here, so be patient, hoard your wyrmite and tickets, and be prepared for-!

Feh! Feh! That's right, Summoners, a new banner with brand new heroes for you to summon is right around the corner! I hope you've got your orbs ready, because my good friends-

WAAAAAIIIIITTTTT! It's not time yet, Feh! You've still got to wait until we're ready for you! And we've really got to talk, my feathered friend. First of all, we call them Adventurers, and we use Wyrmite, not orbs!

Oh! I'm sorry Notte, it's just that I'm so excited! Everyone over at Fire Emblem: Heroes, is talking about our upcoming crossover event with Dragalia Lost! Well, I guess I'll just have to wait until it's time. Until then, why don't you check out my own page right here on this site! Until next time, Summoners!