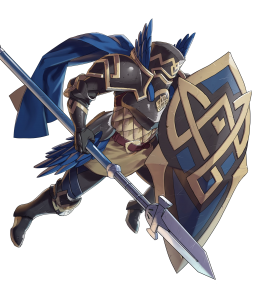 When I was a lad I ate four dozen eggs every morning to help me get large and now that I'm grown I eat five dozen eggs so I'm roughly the size of a barge! (Sample Text)

This builds features an all-around solid playstyle that can tackle almost any situation. As such, it should come as no surprise why HP and Speed make for the best Assets. However, you may be asking yourself

Why doesn’t he have a weapon?

As a wise man once said: “Who needs a weapon with these trained-up muscles? Bwaaah! Yaahhh!” By removing your weapon, you won’t allow any unit to get the upper hand on you through Weapon Triangle advantage. Axes beat lances you say? Well, can they beat these hands?

This synergizes especially well with Future Vision, as enemies won’t even have the chance to get the drop on Lance Armor when he can see them coming from any direction. This segues us into talking about Lance Armor’s main skills and what better choice of A slot is there than Fury? While the listed Fury 5 may not exist yet, Future Vision has indicated that it will be released later. Having said that, what choice of B skill might be best for this build?

That’s right, Desperation. Fury and Desperation are the bread and butter of any build. “Being uninheritable” isn’t an excuse for not putting it on your healers. When an opponent sees Lance Armor’s herculean presence on the battlefield, they will have no choice but to drop their weapons and run away in desperate fear. Alternatively, one can also choose to run Wrath for +10 damage upon the activation of Galeforce. Finally, Disarm Trap is a great skill for any new player so that they avoid running into any pitfalls.

Lance Exp is an essential skill for Lance Armor. One day, Lance Armor will promote into a Lance General, so we can’t have Jagen hogging all of the Exp. Wait what do you mean Lance Exp doesn’t exist? Uhh just use Distant Counter or something.

Last but not least, steal Muspellflame off of Surtr’s dead body and put it on for complete immunity to all damage.

Why is Lance Armor so good? It’s pretty simple when I think about it. Lance Armor isn’t just the best unit in the game, he might be the greatest unit of all time. Just imagine him walking through the halls of Askr, all the ladies swoon at his BST. They know how big his stats are, the essence of his distribution is sold under the name of “Powercreep Orgasm.”

The very nature of Lance Armor is a mystery. Could he be playing a deeper game than even IS realizes? The answer is yes, he has transcended such boundaries as the digital world and has the power to do whatever he sees fit. However, Lance Armor is filled with such guile, such arcane craft that he does not even use these powers. Why, might you ask? You will never know, for the mind of Lance Armor is not one that is easily penetrated. Lance Armor is such a force of nature of his realm that nothing can truly touch him, the only thing keeping him bound to the screen at all is his will to exist within the preordained boundaries of his world. Lance Armor is not only beyond the comprehension of us, but he also exists within a plane of true power and beauty.

Lance Armor is not just a character, a formless collection of words and images, he is himself, the binding that holds the saga together. Without Lance Armor, all of Heroes and Fire Emblem as we know it crumbles.

And these are just a few of the reasons why Lance Armor is so good.

Move over infantry, cavalry, and flier chumps, the real king of the tier list is here. Not only does Lance Armor have the BST of every launch unit in the game combined, he can also phase through trees, use exclusive skills such as Balanced Fighter, and cook minute ramen in only 58 seconds.

Killer Lance: Killing is good so lance that kills is good

Future Vision: I&#039;m tired of being suprised by ambush units so now he can see them coming

Glacies: Glacies is derived from the word glacier so that means it will freeze them. if the enemy is frozen, then he will be able to kill them easier

Flashing Blade 4: he needs the speed, and 5 true damage is OP.

Dagger Breaker: When you have to kill Felicia it can be hard so this will help -OR- Blaze dance becaes more attack is gooder

Threaten speed: if youre enemy has lower speed that means you can deal two times damage and take less damage

phantom Spd 2: +7(?) speed is a lot, so it will be the most helpful; exept for phantom Speed 3, but That costs a lot of coins, and I dont spend money on this game.

What is the best way to get hero feathers
I was wondering because then I could finish some of my 5 stars to +10 11…
Existential Quandary
So, which is the better to have Leif or Alm (from the Mythic Hero banner)? …
Alright guys please don't be mad
I know. Another AR thread. I’m sorry I’m just kind of super frustrated (is that an…
1 more day to complete
Screenshot_20200530-153404~21080×1761 655 KB I usually don’t finish out the…
Libra's May-haps! 🦚
(topic withdrawn by author, will be automatically deleted in 24 hours unless flagged) …
Read More