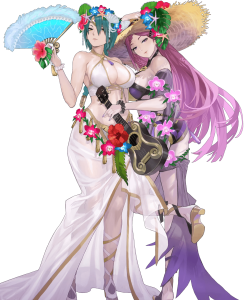 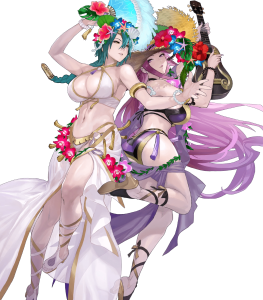 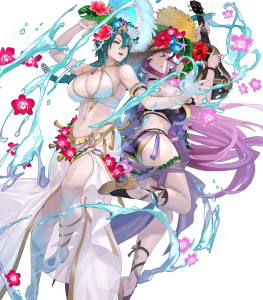 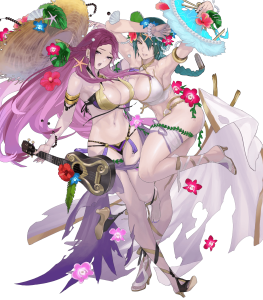 Busty and Busted on the Beach (Magical Nuke and Utility)

Summer Thórr brings many powerful traits that help her be an excellent magical damage dealer, and most of these traits are found in her special weapon Divine Whimsy. Divine Whimsy possesses many effects, with the first being that her Special cooldown is reduced by a value of one at all times, giving her access to more frequent higher cooldown Special activations. At the start of a turn, Summer Thórr will inflict an Exposure debuff on foes on the enemy team with the lowest speed, as well as the enemies two spaces within range of the lowest speed targets. This Exposure debuff is absurdly powerful as it gives a practically free source of +10 True Damage whenever the debuffed enemy is hit. Not only can Thórr utilize this for her own damage, but it even can be utilized by allies. Also at the start of the turn, Thórr will charge her Special by one if she is within two spaces or less from an ally. Combined with Thórr’s innate slaying effect, this gives her the opportunity to easily prepare powerful Specials for frequent use. Divine Whimsy will also grant Thórr +6 Attack during combat and inflict foes with -6 Attack during combat if her HP is greater than or equal to 25%. If that wasn’t enough, Thórr possesses her normal version’s Worldbreaker C Passive, giving her +1 Special cooldown charge per attack during combat to her and her allies. As an example of how powerful Thórr’s Special consistency is with these combined effects with her innate Blazing Thunder Special, Thórr just needs to wait three turns being close to an ally to fully charge Blazing Thunder, then she can initiate combat and trigger her Special, gain an extra Special cooldown charge from Worldbreaker, and on the next turn if she was near an ally Blazing Thunder will be ready to use again. Combine this with her massive base attack of 43 which even has an Attack Super Asset available to push this value to 47 and Summer Thórr possesses no trouble at all with demolishing foes with immense strength.

Taking a page from Loki’s usual focus on utility, Summer Thórr takes advantage of her Duo Hero status with Loki by carrying some extra utility alongside her offense. First returning to Divine Whimsy’s effects, on top of the aforementioned effects this weapon possesses, a Stall debuff is also applied on foes that are debuffed by the same condition her Exposure debuff utilizes. If the debuffed unit can move one extra space, Stall will punish that effect and make it so the debuffed units can only move one space through their next action. Bringing even more utility through their Duo Skill, Summer Thórr’s Duo Skill inflicts Gravity on foes in the cardinal directions of her and reduces their movement to one space, in a similar fashion to Loki’s Thókk’s effect. Finally, the Duo Skill will also neutralize any form of Rally or Hone type bonus, or positive status effects such as Dominance or extra movement that are active on foes within five rows and five columns centered on Thórr. With both great power and high utility, Summer Thórr brings the best of both her and Loki into one mighty package.

In exchange for Summer Thórr being incredibly strong and bulky, her Speed lags behind immensely at a value of 16. While in practice this isn’t much of an issue as she is based so much around single hit nuke damage, it does mean that Summer Thórr will not be landing follow-up attacks while almost every opponent will gain follow-up attacks against her.

Once Summer Thórr gets going with her Special activations, she is extremely hard to stop. With that said, she does require a bit of prep time before she gets going due to the fact that Divine Whimsy only grants one charge of Special cooldown at the start of each turn near an ally means that if running a higher cooldown Special, Thórr will need to wait a bit for her true power to start to shine. While this can be mitigated somewhat by running a low Cooldown Special like Glimmer which will be ready each turn, it will greatly limit Thórr’s damage compared to a Blazing AoE Special.

Inflicts【Gravity】on foes in cardinal directions of unit. Neutralizes any【Bonus】active on foes within 5 rows or 5 columns centered on unit. (Does not neutralize stat bonuses of foes inflicted with Panic.)  【Gravity】 Restricts target's movement to 1 space through its next action.  【Bonus】 All effects that last "for 1 turn" or "that turn only." Includes bonuses granted by a skill like Rally or Hone and positive status effects (extra movement or effects like Dominance).