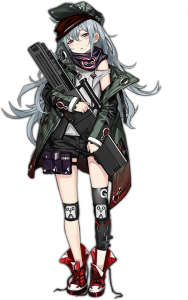 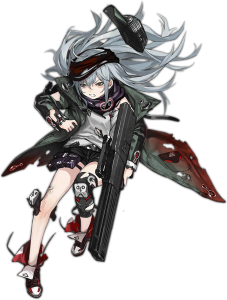 An EOT with #2 Chip is usually preferred. A VFL is an option with higher fairy critical damage aura(~36%). A PEQ is for night battles.

German engineers are apparently absolutely mad, their machinations giving birth to the Gr G11. With her incredibly high RoF and triple-hit skill, G11 is a powerful burst AR.

Although Gr G11 has high RoF and a decent buff tile, the centerpiece of her kit is her Skill, which makes each of her shots hit three times for 4.5 seconds. This effectively triples her DPS for the Skill’s duration. Combined with her incomparable RoF, Gr G11 gets incredible mileage out of her Skill. This lets her capitalize on the main strength of burst ARs, being able to dish out the majority of their DPS at the same time HG buffs activate.

One downside to Gr G11, however, is her lacking Firepower stat. While her DPS is still high thanks to her skill, her low Firepower not only lowers her overall damage output but also makes it hard for her to deal with armored units.

The multiple hits per shot can also allow Gr G11 to either bypass enemy link protection easily or melt Orthrus shields, which rely on the number of hits taken. That said, her short uptime becomes a problem there, which is one reason why AN-94 is often considered to be better than G11. Uptime is a major problem for G11. With a 6 second initial cooldown, G11’s impact is minimal early into the fight. On the flip side, if the fight draws on for too long and G11 is unable to burst down the enemy before her skill runs out, her contribution will fall off due to her poor skill uptime.

G11’s tiles can buff the damage and survivability of the off-tank SMG in front of her pretty well, which is a nice bonus.

Raising Gr G11 is a pain because she requires at least skill level 9 in order to get the full triple shot that makes her so powerful in the first place. Barring that, she was once the best self-buffing AR in the game. Now not so much, but she is still a strong contender for ARSMG teams. Just don’t fight any heavy armor with her.

Once reaching Mod 3, G11 can use her SPEQ and a VFL instead of an EOT and #2Chip.

With this neural upgrade, Gr G11 Mod covers up for her own flaws in most situations, as well as retakes her old crown as the single most utterly ridiculous single-target DPS AR.

First of all, this mod gives Gr G11 a lot of stat increases. Yes, she gets even more RoF, making it even easier for tile buffs to cap her RoF. Only 20% RoF is needed if no #2 Chip or EOT are involved. Her firepower reaches 48, which is much better but still rather low for her rarity. Her tiles are also improved and now can reach more SMGs, encouraging putting G11 Mod on position 7.

G11’s skill 2, Stance of the Assaulter, makes it so that every 3 shots she fires at a single target, she shoots a 4th that deals 2% of the enemy’s max HP, maxing out at 300% of her damage stat after buffs. This damage cannot miss, cannot crit, is affected by armor, and ignores HP shields. The 3 shots to activate are counted regardless of if they actually hit their target, so while G11 Mod’s skill 1 is up, she’s activating her skill 2 for every attack. Her skill 2 is also passive, so it functions outside of Gr G11 Mod’s skill 1 uptime and covers for her original uptime weaknesses.

Due to the 2% enemy maximum HP condition, Gr G11 Mod reaches her maximum potential against enemies with high HP pools (one estimation puts it at >10000 HP) so that her skill 2 shots can constantly deal 300% of her firepower. With the proper buffs and equipment, Gr G11 Mod can often brute force the armor of high HP enemies and melt them in seconds, covering another weakness she had. Under ideal conditions (and ignoring crit/accuracy), Gr G11 Mod does about 6x her normal DPS while her skill 1 is active. Needless to say, that’s pretty good.

Skill 2 ignoring evasion and HP shields is also convenient for ruining the days of units such as Ares, Kratos, or Striders that rely on those to survive.

With her skill now effectively hitting enemies 4 times per attack, Gr G11 also tears through units like Orthrus with even more ease than before.

While stopping at Gr G11’s Mod 2 for the powerful skill is understandable for budgetary reasons, Gr G11’s Mod 3 special equipment and extra stats from Mod 3 are highly recommended if you can afford it due to the significant impact on G11 Mod’s performance they give. Instead of denying any RoF or crit buffs with a #2 Chip, Gr G11’s G-Box just focuses on FP and Crit damage and puts her FP stat on a comparable level to with other ARs equipped with #2 Chip. This also raises the ceiling of her skill 2’s damage output.

With all of this, Gr G11 Mod is definitely a game-changing neural upgrade to raise, reaching insane new heights with her DPS and eclipsing all previous ARs.

Gr G11’s skill allows her to attack her target at three times her already high base rate of fire. This allows her to shred through link protection and number-of-attack reliant enemies like Orthrus (KCCO Dogs) easily.

A 30% FP tile buff is strong and would make a difference if positioned on a DPS SMG.

Actually Too Much Base Rate of Fire

Gr G11’s base RoF is so high that she caps her own RoF to 120 without any skills, just a #2 Chip. This would mean she cannot utilize any SMG RoF tile buffs if using a #2 Chip.

Gr G11’s main drawback is that, since her skill fires three times per shot to deal DPS, she’s experiencing triple the armor penalty a normal AR would. Combining this fact with her low base FP means any significant armor on the enemy kneecaps Gr G11’s DPS.

At a 6 seconds initial cooldown, Gr G11’s contribution to short-duration fights can be limited.

The uptime for G11’s skill is low, making her a burst AR. Her inability to deal out sustained DPS becomes a problem for very long fights that she does not burst down.

Eye of the Assaulter only starts attacking three times per shot at skill level 9+. This means that Gr G11’s performance is heavily limited until that point and requires heavy investment into her.

Even More Ridiculous Rate of Fire

Guess she wasn’t satisfied having the most rate of fire for an AR and got even more. 97 is super high, what more is there to say?

With her Skill 2, Gr G11 Mod technically fires 4 times per shot during her skill. Under ideal conditions, this is about 6x her normal DPS. This kills a lot of things such as Orthrus very quickly. It kills everything very quickly.

Her skill 2 does 2% of enemy max HP as damage. Combined with the fact that she has a high RoF to activate her skill 2 more often, this becomes terrifyingly strong. While this has a cap based on G11’s firepower, it still can get stupidly high and can even shred most high HP armored units with proper investment, making up for an old weakness. High HP enemies also become incredibly common in later content, making this highly effective.

Gr G11 Mod’s tiles changed so that she can reach both SMGs in a standard formation from position 7. Also, their already good multipliers improved.

Gr G11 Mod is still a burst AR and still has 6 seconds before her active skill comes into effect, although her passive can still work and dish out damage.

4.5 seconds have been changed to 5 seconds, but the issue of low active skill uptime (5/16) remains. Again, the passive operates independently and still can deal extra damage outside of the active uptime.

If the enemies have too little HP, Gr G11 Mod will be unable to make the most out of her skill 2. Low enemy HP means the %HP damage will be low too, and G11 will swap targets too much to shoot something 3 times in a row.

While Gr G11 with Mod can take care of quite a few highly armored units, units with ludicrously high armor meant for SLAP ammo (e.g. 400+ armor) still pose a problem for her. At which point this is hardly a weakness since no AR can deal with that anyway.

G11 already has too much RoF, but she can certainly work well with crit and firepower buffs.

G11 already has too much RoF, but she can certainly work well with crit and firepower buffs. Moreso once it raises the ceiling of her skill 2's maximum damage dealt.

G11, noted for its caseless ammunition, was in development from the 1960s to the 1980s by the Corporation for Caseless Rifle Systems, headed by Heckler & Koch. Although it finished development in 1990, due to the reunification of Germany and the political climate of Europe, only 1000 models were ever produced.