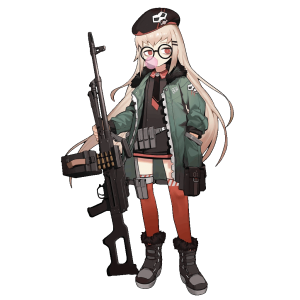 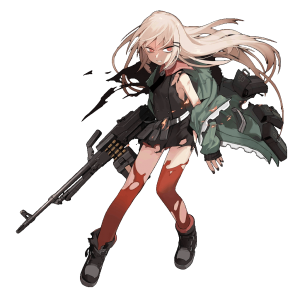 As much as we can like a doll, she can be bad, or hardly decent. That is the case we are going to see here.
Type80 is a 4★ MG with a decent Fire-Power for her class and rarity, and possesses the skill “Damage Focus MG” with a decent multiplier that pushes her straight to the decent options among the MGs. But here is where the problems start for this poor girl. A long ICD making her a second volley MG, stats slightly inferior to other commonly used MG, especially her accuracy being her biggest weakness stat-wise. In the end, there is nothing left in this sad world for her.
Type80, in the end, is a budget option that you can use until you reach the mission reward that she is a weaker alternative to: M1918 BAR, who is a guaranteed quest reward, has a mod, and outclasses her on every point.

Her damage output is helped out by the Mod 1, and she can boost allies’ DPS, but Type 80 Mod still lags behind extended volley MGs and such.

Her main niche application outside of being a DPS is to give SGs shields and the ability to kite fast, and that’s about it. Due to her lack of armor tiles, that’s really her only significant role. This therefore makes stopping at Mod 2 good enough for the odd person that somehow needs this trait.

Damage focus MG is actually a good skill for an MG, that, combined with a decent FP can make the MG really strong.

93 FP is actually pretty decent among the MGs

8 seconds makes her a 2nd volley MG, which makes her performance mediocre compared to first volley MGs for shorter fights, and outclassed by extended volley MGs and certain other 2nd Volley+ MGs for longer ones.

16 movespeed SGs. Kiting scary deathballs has never been easier. Look at them go.

Due to her reduced cooldown and passive, Type80 Mod now has a damage bonus from the first volley and can use her skill 1 for nearly every volley after the first.

Usually it’s considered too nitpicky to dock a T-Doll for something they don’t have, but when participating in the kinds of fights that call for MGSG, armor stacking is often a very large part of the equation. Investing into a whole 4 to 5* Mod without them being able to contribute in a vital part of high-level team building is a misuse of resources.

Yeah, despite her cool passive on skill 1, Type80 Mod’s first volley performance still is not the greatest, and is potentially inconsistent due to MG targeting and varied enemy composition.

Type80 Mod gains a modified tile layout and is able to buff MGs with them now. Weird support tile buff shenanigans are afoot.

She has a new passive attached to her skill 1 that does extra damage when hitting new targets. If the enemies are sufficiently squishy enough, this can improve Type80 Mod’s DPS nicely, even on the first volley due to it being passive.

Her skill 1’s cooldown is also reduced. Assuming a 15 round clip size and 119 RoF, Type80 Mod takes 5 seconds to shoot and ~5.7 seconds to reload. This gives her 1.3 seconds on the third volley before she activates skill 1 again due to a 12 second cooldown, which is nice for her long-term DPS.

The listed 1 second cooldown is functionally identical to a passive skill. At all times, Type80 Mod passively increases the movespeed of all MGs and SGs on her tiles by 10, making them run at about HG base movespeed (MGs: 4 + 10, SGs: 6 + 10, HGs: 15). Since she can’t stand on her own tiles, Type80 Mod cannot experience her own buff. MGSGs she is on still have a glacially slow overall team speed. This passive portion is independent of skill 1, unlike the next part.

Applications for Type80 Mod due to her bizarre kit are rather niche. She certainly should not be used for normal applications. Due to her lack of armor tiles, she cannot really survive in an armor stacking heavy environment. Her already solid 2nd volley skill combined with the increased damage passive can provide good DPS, but she is still really outdone by extended volley MGs like M1895 CB or RPK-203 for the first 3 volleys.

Kiting with SGs is not usually a thing that’s in demand, since they’re very good at just standing there and not taking damage. But with the contribution of Type80 Mod, SGs can run back and forth down the row to kite even faster than a HG can in fights they cannot afford to get hit in due to 16 movespeed.

SGs that reload often like Dana Zane and Defender can potentially take advantage of the bonus 10 HP shield per reload to help tank better, but honestly there’s far bigger, more consistent, or faster sources of HP shield like M500 Mod and Nova.

Her SPEQ is the usual buffed AP ammo that can be replaced by sniper ammo, so it isn’t that urgent to go past mod 2. Another thing, only her damage buff increases for skill 2’s skill levels, so if only using T80 Mod for her utility, it can be left on level 1.

So in conclusion, Type80 Mod’s role outside of being a good 2nd volley MG now becomes a weird SG-supporting MG for extremely specific fights. Raising her instead of superior options in terms of DPS is not recommended, but she is potentially incredibly useful in a few fights.

Fast shotguns allow for some very fancy kiting, even with what should be the slowest team type in the game.

Quite the pointless synergy if you ask me, but hey it exists. Type80 Mod will shield them for 10 points each time they reload.

Lethargic and nonchalant, almost nothing but combat interests her. A major portion of her leisure time is spent on chewing bubble gum while waiting for her next sortie. She has recently started wearing glasses and putting more thought on being more approachable, as people keep saying her eyes look scary.