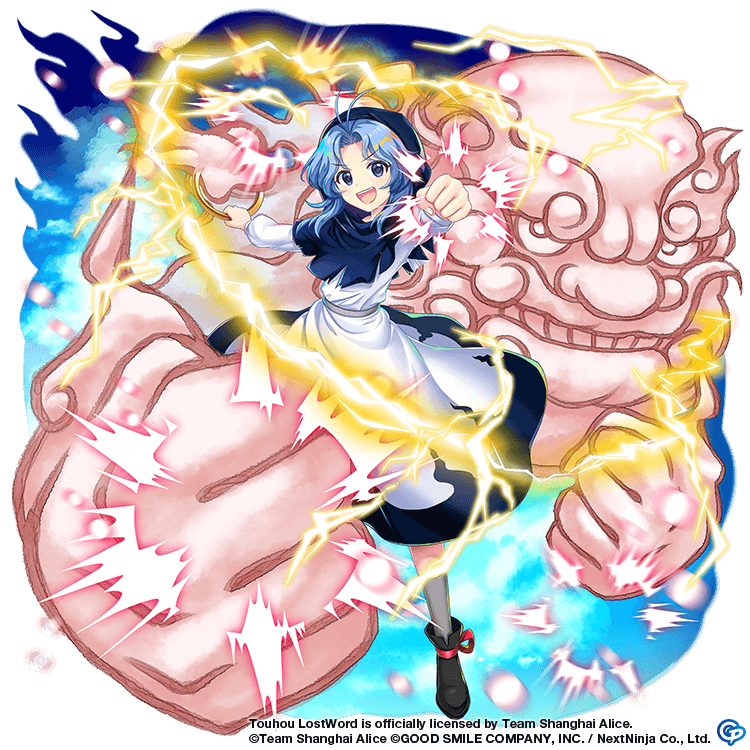 The Great Wheel, Having Guarded and Been Guarded

Ichirin Kumoi's Spread Shot. She glides while brandishing her treasured rings. Ichirin often cooperates with Unzan in combat. However, she charges forward on her own in this attack. It is normal for Buddhists to fight to protect the teachings of Buddha, but Ichirin, as a youkai, is also fully capable of fighting on her own. After all, she saw past a mikoshi nyuudou, a youkai that becomes larger the higher you look up.
Hanging Cloud's Iron Hammer

Ichirin Kumoi's Focus Shot. An attack where Unzan slams his fist to the ground. Unzan is capable of changing shape and size at will! So it is no surprise that he can assault the enemy by transforming into a large fist. He may be a cloud nyuudou, but he's hard-headed and righteous, and his fist is rock hard! 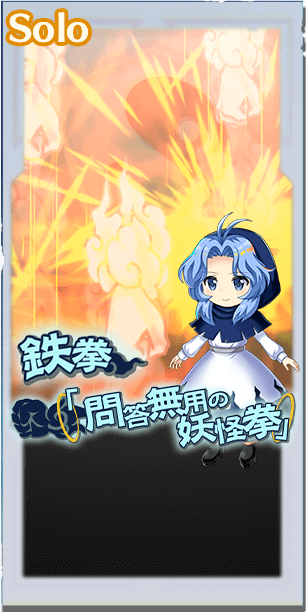 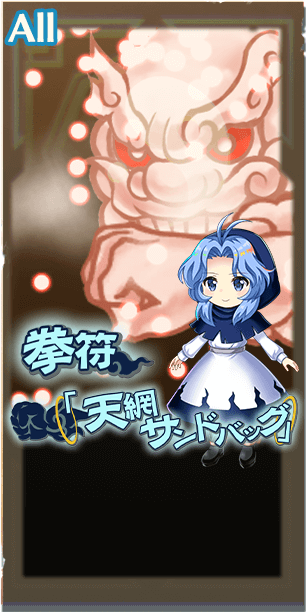 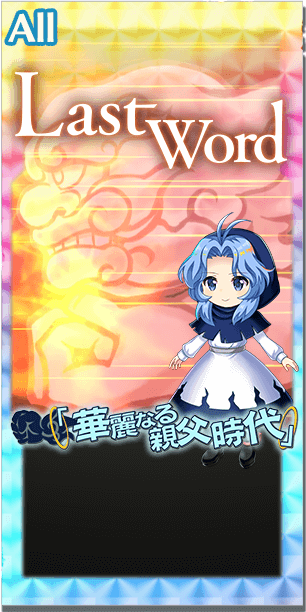 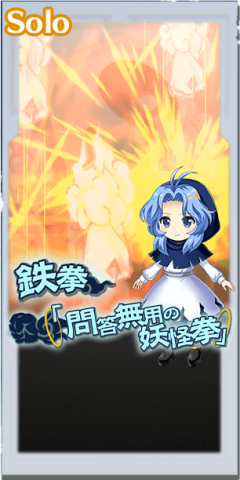 Ichirin Kumoi's Spell Card. An attack that breaks conversation. When competing with Ichirin, you may be assaulted with this attack first. You will be overwhelmed by the impact of Unzan's fists. Be careful not to look up too high and be overwhelmed.
*Pre- and Post- effects assume max level. Effects per level can be viewed here.
Pre-Attack Spell Card Effects 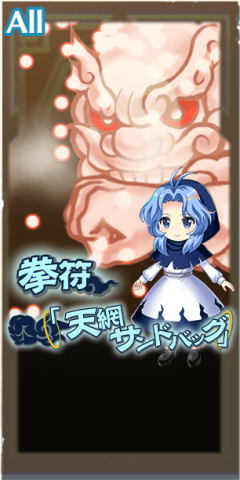 Ichirin Kumoi's Spell Card. An attack where Unzan punches the wall. It seems quite difficult to dodge this meticulous barrage of fists. But even if someone avoids the fists, they will still have to deal with debris falling down from the sky.
*Pre- and Post- effects assume max level. Effects per level can be viewed here.
Pre-Attack Spell Card Effects 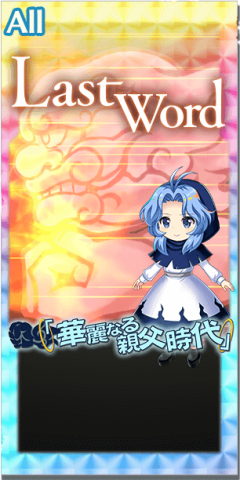 Ichirin Kumoi's Last Word. An attack where Ichirin and Unzan unite as one. In the past, Ichirin once vanquished Unzan, so Unzan decided to follow Ichirin. However, the relationship between the two may be closer to that of a good old father-daughter relationship rather than a master-servant relationship, which goes against how most people treat their familiars and shikigami. The taciturn and loyal Unzan is like a stubborn father who treats the cheerful and earnest Ichirin like his only daughter. This may be the form their bond took after being fostered over a long period of time. Or is it a sign that they have overcome some special trial? The truth lies within their hearts.
*Pre- and Post- effects assume max level. Effects per level can be viewed here.
Pre-Attack Spell Card Effects

Ichirin Kumoi was formerly a human who became a youkai in a method similar to magician youkai. After hearing rumors about Unzan, a nyuudou (or youkai that has a bald head similar to a Buddhist monk), she attempted to search out for him. Once discovered, Unzan gained admiration for the girl and became her ally. This led to Ichirin no longer fearing youkai, but humans instead fearing and hating her as she eventually became a youkai herself. Since then, her and Unzan have joined the ranks of youkai-accepting nun Byakuren Hijiri and the Myouren Temple, serving as physical workers due to Unzan’s great strength. Unzan is also the one that mainly strikes and fires bullets during Ichirin’s spell cards, but the two have great synergy with one another, leading them to be S-Tier allies in Touhou LostWord.

Unzan allows for Ichirin to go for a very oppressive and fast offense through her Last Word, Traditional Era of a Splendid Old Man. As a Destroy-Type Friend, Ichirin goes all out on CRIT-based buffs, specifically buffing her CRIT ATK by 3 levels (3T) upon using the attack. She doesn’t really reach her best Killer Bullets, Human-Killer, until 2P, but that doesn’t matter when her third skill, Enlargement (Unzan), gives her 2.00 Spirit Power to give her 3P on turn 1! This gives Ichirin a very easy way to perform heavy damage immediately, and even then she has plenty of time to set up for even more damage when necessary.

When fighting in extended battles, Ichirin mainly improves her CRIT-based offense while having a bit of extra utility. Her second spell, Fist Sign: Heavenly Net Sandbag, is especially good for both, as it decreases all foes’ CRIT DEF by 2 levels (3T) to help out everyone’s CRIT damage. For even more CRIT ATK as well as self-Charge, her second skill, Divine Power Focus, does so with 3 more levels of CRIT ATK UP (3T). She does come with CRIT Accuracy buffs to assist in landing these heavy CRITs, mainly from her first skill, Golden Ring. While the 2 levels of CRIT Accuracy UP (3T) is nice, it is unfortunate that the 2 levels of Accuracy UP (1T) only lasts for 1 turn, which might not be long enough to support her in a longer fight. Another slight flaw with Ichirin is her lack of team support. Outside of Fist Sign: Heavenly Net Sandbag’s CRIT DEF debuff, her only other sources of support are from her first spell, Iron Fist: An Unarguable Youkai Punch, which buffs the party’s Yang DEF by 3 levels (2T) and partywide CRIT ATK UP for every Boost she does on a turn. It can definitely help certain teams, but her range of team utility is definitely limited.

What isn’t as limited is Ichirin’s Barrier break potential, as she serves as a decent Water and Wood breaker. All of her spells have a balanced mix of both elements, with Iron Fist: An Unarguable Youkai Punch and Traditional Era of a Splendid Old Man having 3 of each element while Fist Sign: Heavenly Net Sandbag only has 2 of each. This gives her a decent way to break foes weak to either element. Furthermore, her Spread shot, Gliding Treasure Rings, has versatility in elemental breaks and even anomaly breaks. It both has 0P Metal access to allow for spammable Metal breaks as well as Discharge, or Paralyze anomaly breaks, at 1P and 2P. Ichirin’s only way to Paralyze enemies is a start-of-wave passive that only works 30% of the time on one target, but the coverage is still useful if another party member can Paralyze.

Overall, Ichirin is just a solid Friend to have, especially when it comes to burst damage thanks to her easy turn 1 3P. As a CRIT-based Friend, she holds very powerful self-buffs regarding critical hits, but doesn’t do much to pass that on to the rest of the team. She can still give out a small amount of support, but her main focus will be powering up Unzan to deal a devastating blow. And honestly, don’t we all want to see that anyway?

Even with her own 2.00 Spirit Power UP, Ichirin can always go for some more Spirit Power in the long-run, meaning The Witch of Scarlet Dreams is always a decent pick for a story card slot. For other buffs, Ichirin mainly wants to keep her final damage consistent, which can be done by buffing her Yang ATK, the stat she uses for her Last Word, or buffing her CRIT Accuracy. How Irrational… or Ordinary Magician works well for this slot, the former being a great Yang ATK stat stick while the latter buffs CRIT ATK slightly. For CRIT Accuracy, look for cards such as The Surface Is So Fun!, which raises CRIT ATK but mainly CRIT Accuracy.

Ichirin’s best Last Word story card is not currently in Global, but she has decent alternatives to utilize right now. Eating Contest is somewhat an easy pick, since it buffs Body Bullets’ power by 45%, which is what her Last Word is entirely made of. However, Ordinary Magician works really well here too, since it buffs the spell’s Yang ATK by 3 levels while also giving some extra CRIT ATK UP, which Unzan will appreciate.

The first priority for Ichirin’s skills would be her third one, Enlargement (Unzan), as it allows her to reach 3P on the first turn and even gives an extra level of Yang ATK UP for even more damage. Even if it does not help the skill’s cooldown, leveling this skill heavily increases her damage potential. Golden Ring, Ichirin’s first skill, can be leveled next to grant her an additional level of Accuracy and CRIT Accuracy for more consistent damage. Her second skill, Divine Power Focus, provides the least from leveling due to only giving an extra level of CRIT ATK UP. This is definitely useful for dealing more damage, but since this is all the spells provides at max level, it can be left for last.