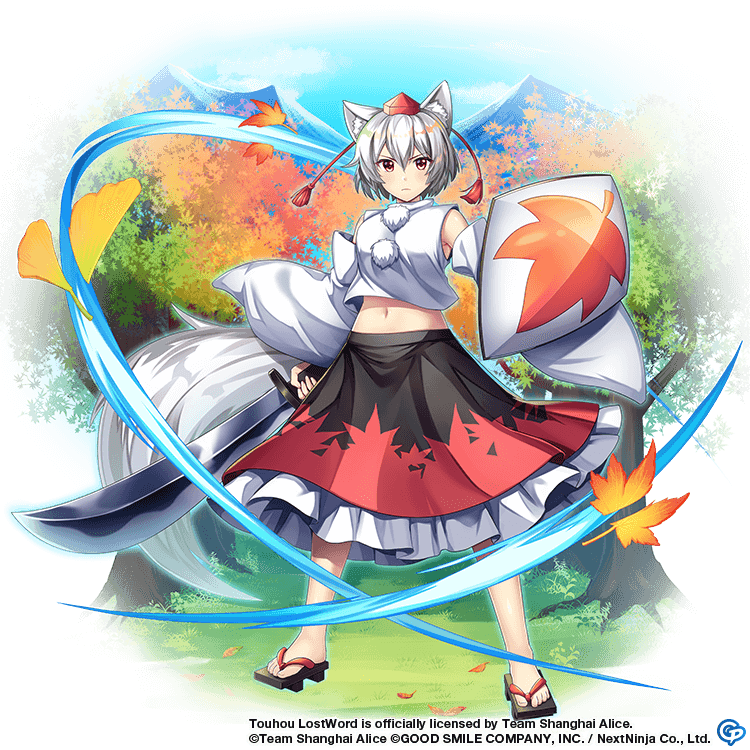 Momiji Inubashiri's Spread Shot (a Touhou LW original). She uses her shield to attack. Throwing your shield may not be a realistic way to fight, but it sure is flashy. Throwing a shield, so it bounces back to you is a simple task for one with the superior senses of a white wolf tengu... Probably.
Nomad Wolf Sword

Momiji Inubashiri's Focus Shot (a Touhou LW original). She uses her shield to attack. Charging with your shield aloft is a flashy and effective way to fight. You can surely overwhelm any opponent who tries to resist. White wolf tengu use this technique and work as a group to subdue intruders... Probably. 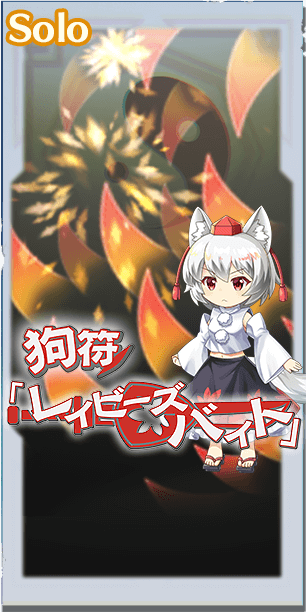 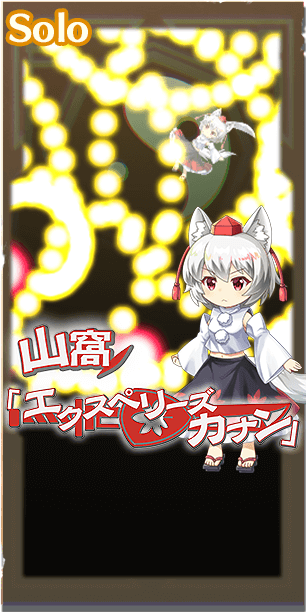 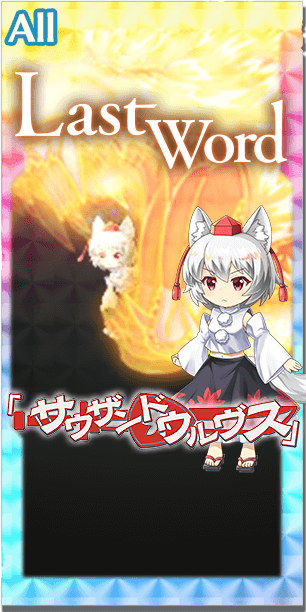 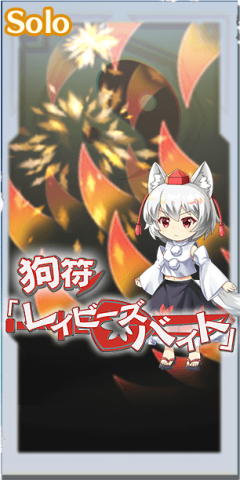 Momiji Inubashiri's Spell Card. She unleashes a barrage of slashes in the form of ferocious beast fangs. Wolves excel at biting. However, the question is whether they'll stop or not after a single bite.
*Pre- and Post- effects assume max level. Effects per level can be viewed here.
Pre-Attack Spell Card Effects 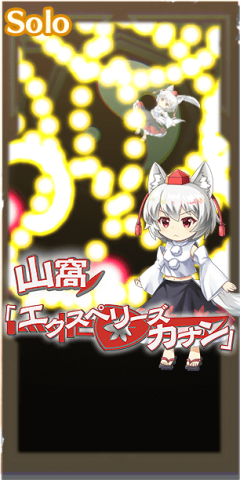 Momiji Inubashiri's Spell Card. She spins and unleashes multiple spirals of bullets in this attack. Most cultures throughout the world describe some sort of ''promised land'' in their mythology. The history of the human race is the history of humans migrating across this planet. They travel in search of their promised land... The place where they eventually settle is most likely the land that was promised to them.
*Pre- and Post- effects assume max level. Effects per level can be viewed here.
Pre-Attack Spell Card Effects 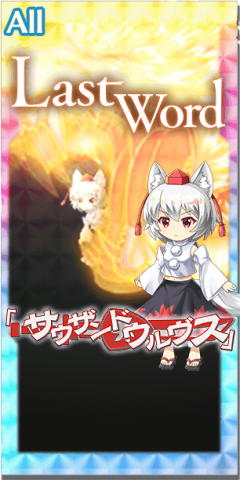 Momiji Inubashiri's Last Word (a Touhou LW original). A thousand wolves pounce on her targets. It is perilous to encounter a pack of wolves in the mountains at night, all the more so if they are youkai wolves. You may be able to escape ordinary wolves by climbing up a tree. But youkai wolves... They'll still get you.
*Pre- and Post- effects assume max level. Effects per level can be viewed here.
Pre-Attack Spell Card Effects

While the tengu are primarily seen residing around Youkai Mountain, Momiji Inubashiri is one of the tengu that specifically patrols the mountain along with her white wolf tengu guard. Her increased eyesight and sense of smell makes her very good at noticing intruders, not to mention her above average speed. On her off time she can be seen playing shogi with idle kappa or even arguing with Aya Shameimaru if they run into each other. She tries her hardest to guard, but Momiji finds herself as an E-Tier Friend in LostWord.

As a Defense-type Friend, Momiji takes her focus on defense to the max. Only her third skill, Clairvoyance, explicitly increases her Yin ATK by 2 levels, though Grazing can allow her to reach a max of 5 Yin ATK UP levels. Her Last Word, Thousand Wolves, technically has Hard scaling to increase her damage based on defense, but it is rather low, as can be seen below.

Momiji’s goal is to defend her party in challenging fights. Skill 1, Foliage Camouflage, decreases the Focus on everyone else to keep it on her while she makes sure she can handle the damage by increasing her Yin DEF by 6 levels total between her second skill, Bird of Boundaries (4 levels), and her third skill, Clairvoyance (2 additional levels). She can potentially get even more levels of Yin DEF from her first spell, (SC2), but each of these buffs are purely Yin-focused. Helpful for any Yin-only opponents for sure, but the intense increases of Focus will mean even All-targeting attacks will be doing greater damage to her. Without consistent barrier restoration, it can be questionable if Momiji will even survive for long against All-target spells in longer fights or even Yang-focused opponents.

Momiji’s only other significant debuff comes from decreasing a singular target’s Evasion by 2 levels with a 60% chance for an additional level. Her elemental breaks are low on her spells, having only 2 Wood breaks on each one, with Thousand Wolves at least having 3 extra Wood breaks when boosted twice. Unfortunately, that is about everything that stands out from Momiji’s kit. She is at least a very cooperative and dutiful guard, even if she is not the strongest.

The Hard scaling of Momiji’s spells are as follows:

Without any of her own Accuracy or Spirit Power support, story cards that boost either become a heavy necessity for Momiji. Afterwards, buffs to her own Yin ATK can be prioritized or Yin DEF to keep her defense high, even if her Hard scaling is so low.

Every bullet of Momiji’s Last Word is a Body bullet, making the 45% power UP from Eating Contest very helpful in damage output. It also heals her own HP if she needs additional health after taking some hits for the team. Of course, without any Accuracy support her Last Word might still be inconsistent, so make sure to get Accuracy UP from another story card or a Friend’s support first.

Clairvoyance has the most important benefits at Level 10, giving Momiji a guaranteed 2 levels of both Yin ATK and Yin DEF UP. Secondly, getting Bird of Boundaries to Level 10 gives Momiji one turn of 4 levels of Yin DEF UP every 2 turns, helping her stay defensive whenever needed. Foliage Camouflage can have its uses for taking damage away from weaker teammates, but the prior skills make sure Momiji can actually take that pain.