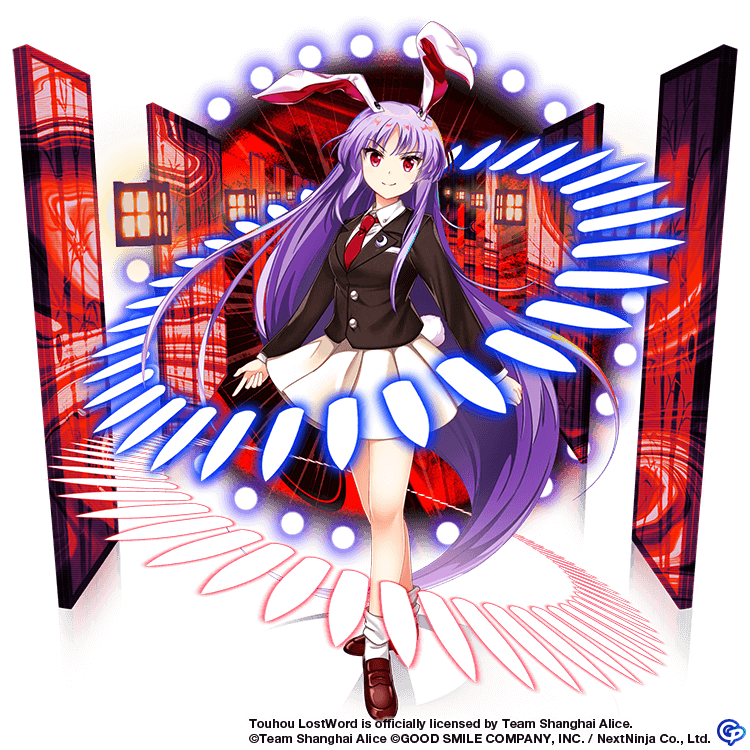 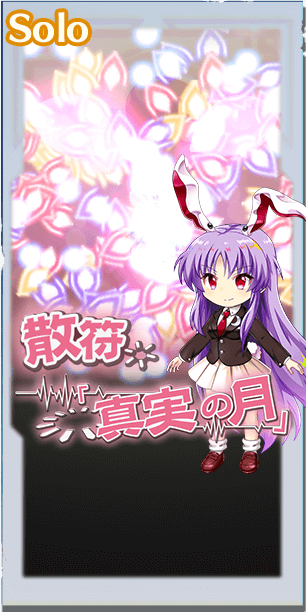 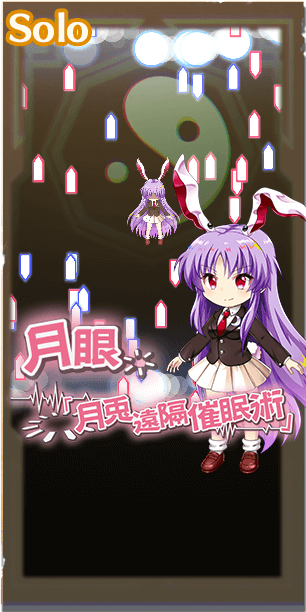 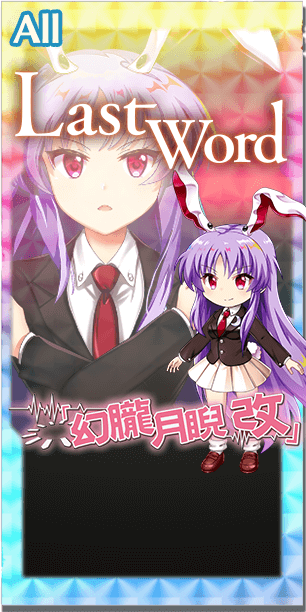 For every layer of Barrier Status: Paralyze or Blind, Agility, Accuracy, and Evasion 1 level UP.
DMG to resisted elements 20% UP.

Reisen Undongein Inaba (Eternal) is an alternate version of the normal Reisen Udongein Inaba that we all know, that takes place in the middle of the incident and original game that she appears in, Imperishable Night. Similarly to characters like Scarlet Reimu, Reisen is just in the crux of her own character arc as she appears to us here. In Imperishable Night, Reimu Hakurei needs to get through Reisen after discovering that she was a leading cause to the disappearance of the moon. Reisen puts up quite a fight here and that’s shown in Touhou LostWord.

This new, fancy version of Reisen is essentially an upgraded version. She hits pretty hard and part of that has to do with her ability. This ability increases the damage dealt to enemies weak against the element she is using by 20%, and she gets a level of Speed, Accuracy, and Dodge for every stack of Electrified, and Darkness on her. As such, her kit seems to revolve around the idea of stacking anomalies and buffs.

For farming, her ability to rack up damage quickly in such a short amount of turns works wonders for her AoE Last Word, Stare of the Hazy Phantom Moon Remix (Lunatic Red Eyes Remix). Her powerful Slicing scaling also allows for her to rack up even more damage, capitalizing her ability to buff her own speed. In addition, because her ability targets elemental disadvantages, she is excellent for notoriously hard Story Card farms.
Solo Stage Farms: 3-6-3, 3-11-1, Future Story Card Stage

For harder fights, Eternal Reisen allows herself the time to stack up even more damage for herself via her Spell Cards. More specifically, her second Spell Card, Lunar Eyes: Moon Rabbit's Remote Mesmerism (Tele-Mesmerism), increases all allies’ speed up by 3 for 3 whole turns. This coincides well with her ability since that will all transfer into damage assuming what you’re hitting is weak against the elements she is using. Her first Spell Card, Spread Sign: Moon of Truth (Invisible Full Moon), isn’t nearly as helpful in terms of utility, but makes up for that with its ability to break every anomaly at only P2. The main downside to both Spell Cards is that they are solo-targeting.

For breaks, Eternal Reisen boasts a solid chunk of Moon breaks in addition to Water, Fire, Metal, and Sun. On her Shots she does have P1 breaks for both Moon and Fire, however, these are still a far cry from P0 though they are still repeatable given the right amount of P. This doesn’t make her bad for it, however, as Moon breaking is already rather scarce and she is easily one of the better friends for the job.

Overall, Eternal Reisen has an extremely powerful kit that allows her to rack up a ton of damage in both a short amount of time and in a way that’s easy to understand, making her kit rather simple.

The Slicing scaling on Reisen's attacks are as follows:

Eternal Reisen’s skills are already very good on their own since they all involve adding more and more damage to her arsenal. It’s recommended to start with Emotional Waves and move on to Physical Waves, before lastly, maxing out Intellectual Waves. The main thing to note here is that she doesn’t necessarily need the extra 1 P from her third skill due to her front-loaded Spell Cards.