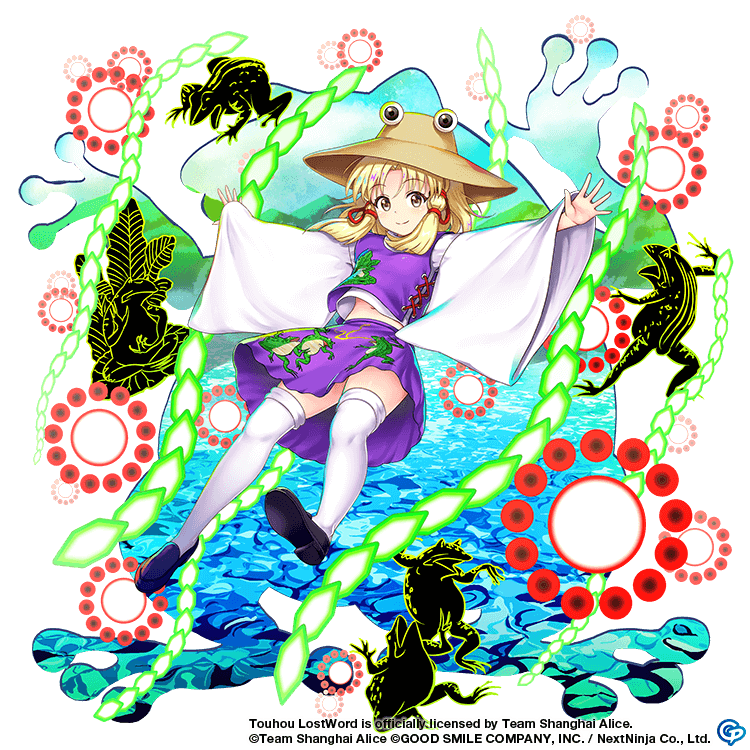 The Spread Shot of Suwako Moriya from the world with squabbling gods on the mountain (a Touhou LW original). This attack recreates Suwa's divine water. The entire area of Suwa is blessed with plentiful water. When the Moriya Shrine was located in the outside world, the shrine was probably worshiped for its water. The clean and abundant water is a blessing from the gods that has sustained life in the past and continues to do so in the present.
Rustling Crops

The Focus Shot of Suwako Moriya from the world with squabbling gods on the mountain (a Touhou LW original). This attack reveals a glimpse of her authority as a god of agriculture. Mountains and paddies conflict in terms of agriculture, but they are also connected by water. The raging god of destruction and the gentle god of blessings are two sides of the same coin, like a mother who raises her children. 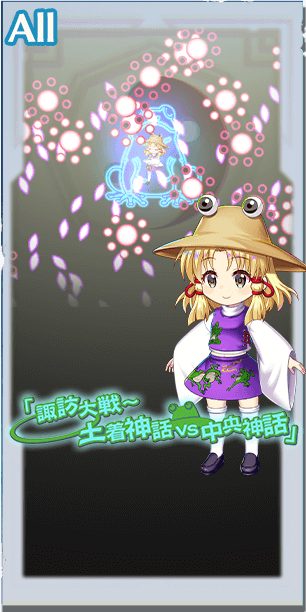 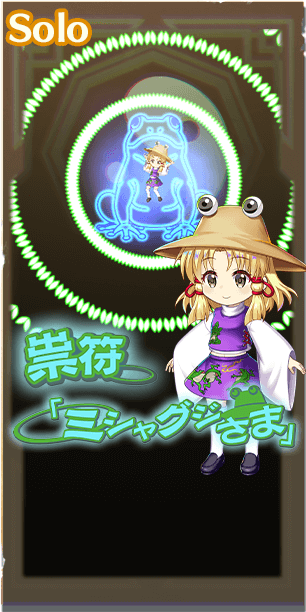 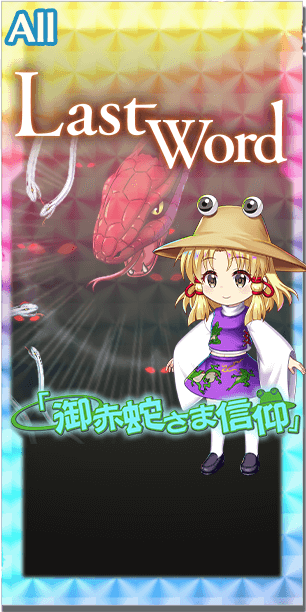 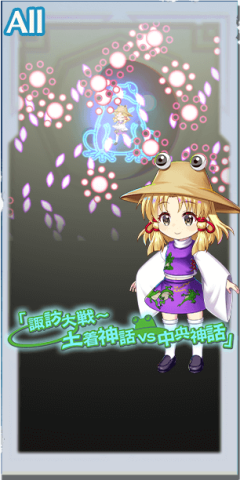 A Spell Card of Suwako Moriya from the world with squabbling gods on the mountain. This attack recreates an ancient war between the gods. The battle between Kanako and Suwako is thought to have been a battle of iron manufacturing techniques. Suwako's iron ring represents primitive low-temperature iron manufacturing using lake iron. In contrast, Kanako's wisteria branch represents the advanced high-temperature tatara smelting method, where iron sand is sorted using a wisteria colander. This could be interpreted as a battle between Suwako, the water and earth god who bestows the blessing of lake iron, and Kanako, the wind and mountain god who bestows the blessing of wind for the tatara furnace. Since ancient times, technology has also been a form of divine authority.
*Pre- and Post- effects assume max level. Effects per level can be viewed here.
Pre-Attack Spell Card Effects

Own Spirit Power 1.7 UP. [Additional effect +0.05 with success rate 0%.]
Scourge Sign: The Mishaguji 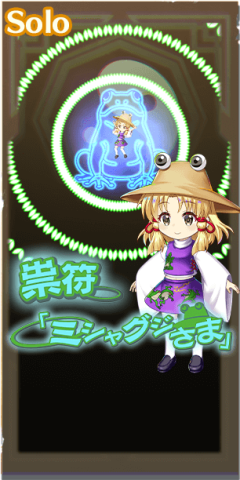 A Spell Card of Suwako Moriya from the world with squabbling gods on the mountain. She uses her authority as the highest tier native deity to command the Mishaguji in this attack. There are various theories about the name and appearance of the Mishaguji, indicating that they are deities who have been worshiped in many places for a long time. They are also believed to be primordial gods that didn't initially have any forms. Suwako, who controls the Mishaguji, would likewise be a god who has deeply influenced the way people believe in and worship deities. Native gods are the ones who ask people the fundamental question... ''What is faith''? Their curses are just a means to this end.
*Pre- and Post- effects assume max level. Effects per level can be viewed here.
Pre-Attack Spell Card Effects 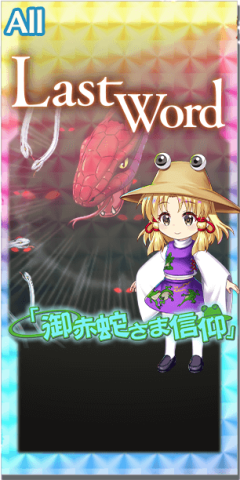 The Last Word of Suwako Moriya from the world with squabbling gods on the mountain (a Touhou LW original). In this attack, she shows one of her other name's divine power. It is quite common for gods to have various names. It is thought that they are not merely different ways of saying the same name or errors from having the name passed down through oral tradition... Each name represents different aspects of the god's power and authority. The name ''Mishakuja'' means ''Great Red Serpent'' and indicates that this god is both auspicious and terrifying. Suwako was originally worshipped as a dragon serpent god, but this aspect was seized by Kanako when Kanako defeated her. Suwako is not a god of frogs.
*Pre- and Post- effects assume max level. Effects per level can be viewed here.
Pre-Attack Spell Card Effects

When using Boost, party's CRIT Accuracy 1 level UP (1 turn).
DMG to effective elements 25% UP.
DMG from resisted elements 25% DOWN.

Suwako Moriya was the original god that looked over Moriya Shrine at a time way before Sanae Kochiya was the shrine maiden. Eventually, however, the goddess Kanako Yasaka invaded and ended up causing Suwako to surrender the shrine to another god. Plenty of time later, the Moriya Shrine found itself within Gensokyo with Kanako taking the charge of taking over the Youkai Mountain and claiming all of its faith. Still binded to the shrine, Suwako still handled spiritual manners within the shrine, but Kanako is the main figure that handles business with any external factors. This included the unfriendly visit by Reimu Hakurei and Marisa Kirisame. After defeating Kanako and ending her plight, Suwako took interest in the two and ended up fighting them for “fun” when they returned. As a god dating all the way back to ancient times, it’s no surprise that she makes her appearance as an S+ Tier Friend.

For farming, Suwako is relatively unimpressive due to the nature of the current stages. While her Last Word, Mishakuja Faith, can do some impressive damage especially with setup, the stages that are relevant for farming do not favor Suwako’s strengths, as they don’t line up neatly with the elements and killers that she wields. Despite this, Suwako still can be used to farm some notable stages like The Witch of Scarlet Dreams (2-7-1) and Mysterious Sword Master (3-3-3).

Challenging Content, on the other hand, is a different matter for this goddess. With her skills and Spell Cards, she can fill either the role of a CRIT supporter, a powerful barrier breaker, or simply roll over enemies with damage from her attacks. Her 1st skill, Ujigami’s Fury, gives Suwako 0.7 P for herself and debuffs all the enemies with 2 stages of CRIT Evasion down for 3 turns. Her 3rd skill, Moriya Mountain God, synergizes with this well as it not only provides her with another 0.7 P, but further reduces all her foes with 2 levels of CRIT Evasion down for 2 turns and provides the team with 2 levels of CRIT ATK for 2 turns. Her 2nd skill, Suwa Defense Line, allows Suwako to take advantage of buffs from teammates by providing herself with charge. Additionally, this skill also provides the team with 2 levels of Yang ATK up for 2 turns and gives Suwako 2 levels of Accuracy for 3 turns. As such, Suwako supports her damage output well. Suwako also has additional utility with her 1st Spell Card, Suwa War - Native Myth vs Central Myth, as it provides the party with 3 levels of Agility for 3 turns.

Suwako really shines, though, when it comes to her elemental breaks. With a primary focus on Metal breaks on her spell cards, Suwako can also provide a handful of Earth and Wood breaks to boot. Her 1st Spell Card assails enemies with 3 Wood and 3 Metal breaks. Her 2nd Spell Card, Scourge Sign: The Mishaguji, has a spread of 3 Earth and 3 Metal breaks in addition to the ability to inflict 3 layers of Poison and then break them with boosts. Finally, her Last Word has a full complement of 6 Metal lines.

While she may have lost to Kanako in the war, make no mistake; this goddess is still no slouch. Boasting a spread of powerful elements and the ability to deal good damage to boot, Suwako certainly lives up to her title as the deity of the Moriya shrine.

Suwako appreciates cards that give her Yang ATK up for further setup. As such, cards like Nameless Adventurers can provide the team with Yang ATK while also augmenting her 2nd Spell Card’s power even further. Cards which provide her with more CRIT ATK, like Worlds in Hand, Miracle Mallet, and Bloody Order can help her damage even further with her already high CRIT rate. Myouren Temple Anniversary also has a place for Suwako as not only does it provide her with even more utility with a party wide 0.75 P, but it also boosts her attacks by debuffing an enemy with 2 stages of Yang DEF down and boosting her Metal bullets. Finally, to optimize her Last Word’s damage, look for Yang ATK fillers.

At the Secluded Springs

Suwako’s best in slot story card is At the Secluded Springs as it provides her with a 50% boost on all her lines as they are all Body and Metal bullets. Alternatively, you can use Myouren Temple Anniversary against a single foe due to the debuff and Metal bullet boost. Eating Contest serves as a good option due to its 45% Body bullet boost. Finally, there will be a farmable story card that comes out in the near future that is as good as At the Secluded Springs.