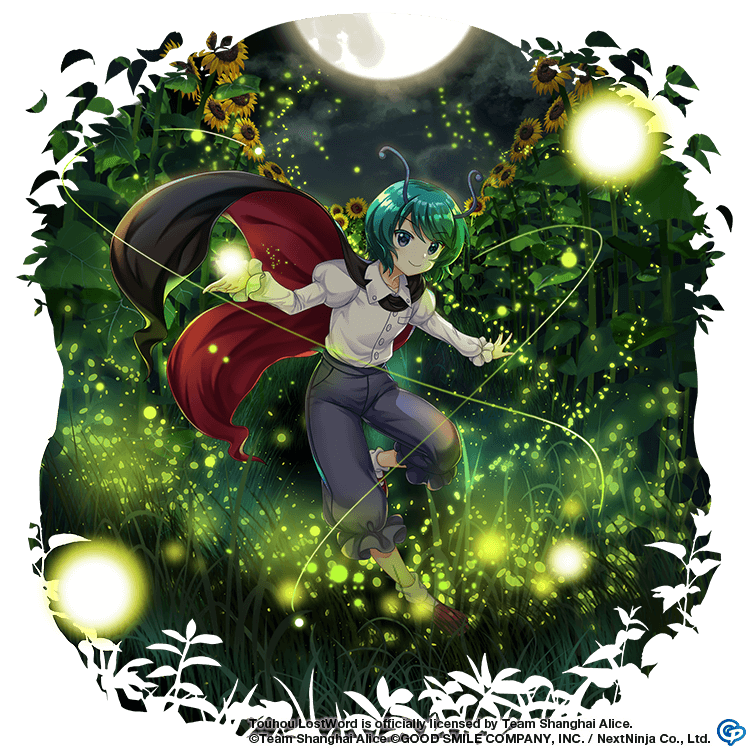 A Bug of Light Wriggling in the Dark

Wriggle Nightbug's Spread Shot (a Touhou LW original). She attacks by emitting beams of light that act as signals. It's said fireflies developed bioluminescence as a way to warn away predators, however, in reality, not all fireflies light up. The ones that do, though, are believed to shine as eggs, larvae, and pupae. In other words, throughout their entire life cycle.
Hopper Kick

Wriggle Nightbug's Focus Shot (a Touhou LW original). She attacks with her surprisingly powerful legs. Insects' legs are extremely strong, especially grasshoppers, who can jump many times their height with ease. But even they're no match for fleas, who jump several dozen times their height. If only humans could jump that high... 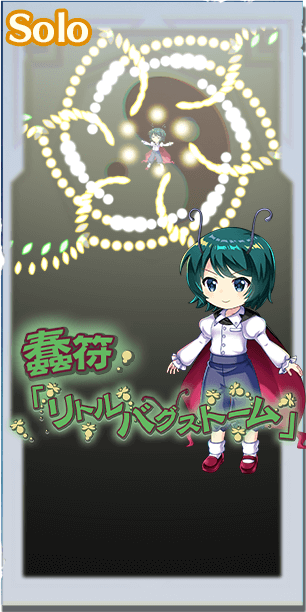 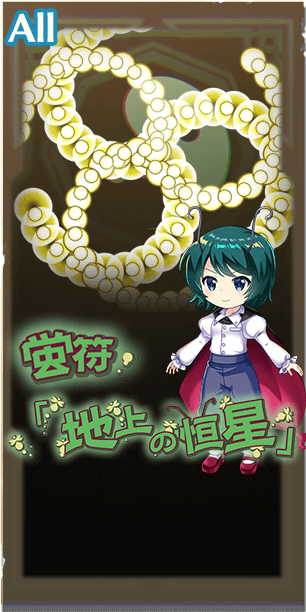 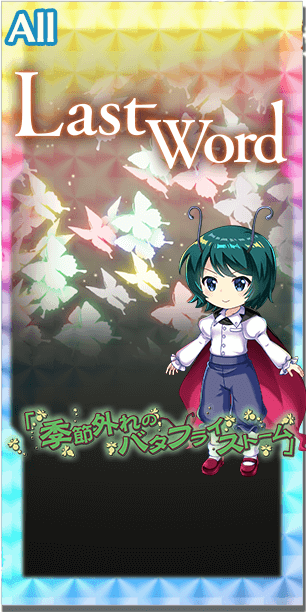 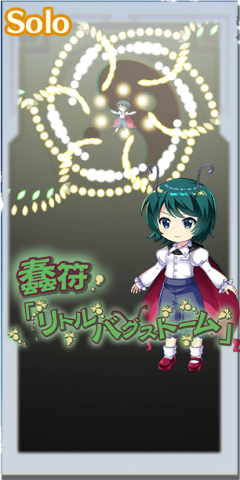 Wriggle Nightbug's Spell Card. Lots of fireflies all light up at once in this attack. This spectacle is reminiscent of how firefly larvae burst out from their eggs. Both larva and egg produce a beautiful glow, but to think that glow comes from insects... One shudders at the thought.
*Pre- and Post- effects assume max level. Effects per level can be viewed here.
Pre-Attack Spell Card Effects 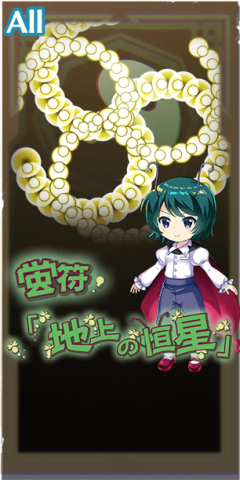 Wriggle Nightbug's Spell Card. Giant fireflies emit bright orbs of light. This attack probably was inspired by giant fireflies like the genji-botaru. But even then, these fireflies might be a little too big... Or at least, that's what one reporter wrote in her article. Fireflies that shine really are like stars on Earth.
*Pre- and Post- effects assume max level. Effects per level can be viewed here.
Pre-Attack Spell Card Effects 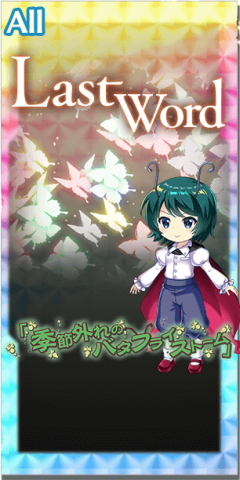 Wriggle Nightbug's Last Word. A typhoon howls through a long autumn night. ''Does the flap of a butterfly's wings set off a storm in a faraway land?'' So goes chaos theory's infamous Butterfly Effect, but for this attack, Wriggle Nightbug turns that theory into reality by forcing butterflies to flap, which is only possible because she can manipulate insects. Get in the way of this storm, and there's no way you'll survive. Underestimate insects at your own peril...
*Pre- and Post- effects assume max level. Effects per level can be viewed here.
Pre-Attack Spell Card Effects

Wriggle Nightbug was released on December 2, 2022 in Prayer “Friendly Firefly”.

See those blinking lights among the fields and trees at night? There may be a youkai among them. Wriggle Nightbug was first introduced to the world during the Eternal Night incident, where she can be found flitting around during the extended hour of darkness. Her ability to manipulate insects manifests in a Debuff-Class Friend who inflicts various anomalies on her enemies to sow chaos among their ranks. Wriggle is a reminder to friend and foe alike that even bugs can shine among the stars in your lineup.

Despite (Or perhaps, due to) generating constant energy to illuminate her surroundings, Wriggle is constantly in need of energy to fuel her various abilities. Mountain of Faith supports her needs best, providing 2 Spirit P while increasing Light Bullet damage by 30%. The Witch of Scarlet Dreams is an easy alternative, which players will be able to farm at their leisure. If you’re looking specifically to boost her Damage output, go with Puppeteer and Necromancer instead for a flat 50% boost to Light bullets.

Redder Than Blood works great in Wriggle due to both increasing her Yin ATK while also boosting her Fire Bullets by 20%. If you already have a good source of Yin ATK elsewhere, look instead to Puppeteer and Necromancer for a flat 50% boost to Light Bullets.

Start with Wriggle’s first skill, Jointed Appendages to help her and her team hit enemies with an Evasion debuff while boosting Slicing damage. Her second skill, Ladder-Like Nerves comes next to help her hit those important Spirit P levels and set up Spell Card debuffs with Quick. Finally, Compound and Ocelli inflicts Blind to a single target while reducing their Yin DEF by 2 levels, which can setup for both Anomaly breaking and nuking.

Anomalies are her playground

Two out of three of Wriggle’s Anomaly breaks are locked behind her 3P Spread Shot and Focus Shot. With only one skill giving her 1P every 4 turns, she has to rely on support to hit those levels while maintaining her output each turn.