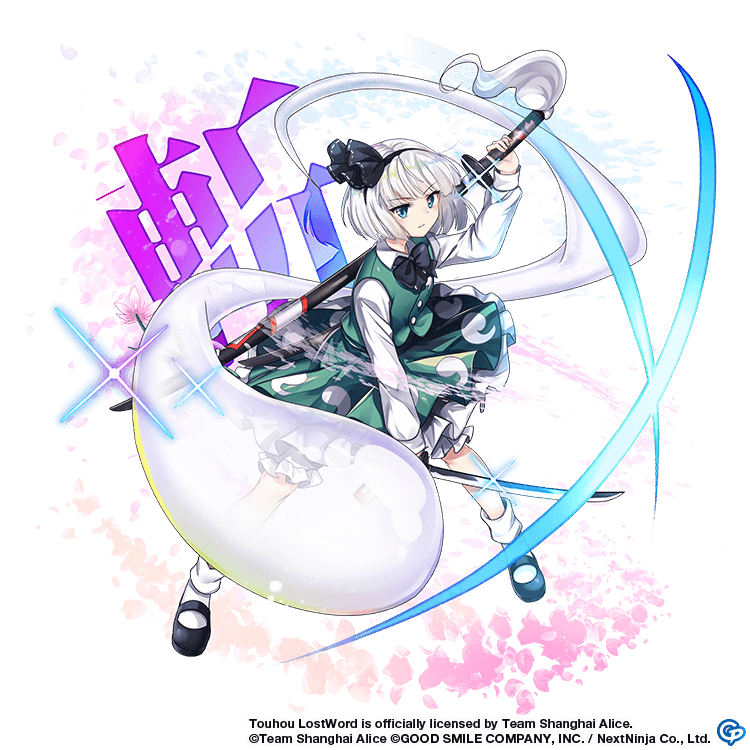 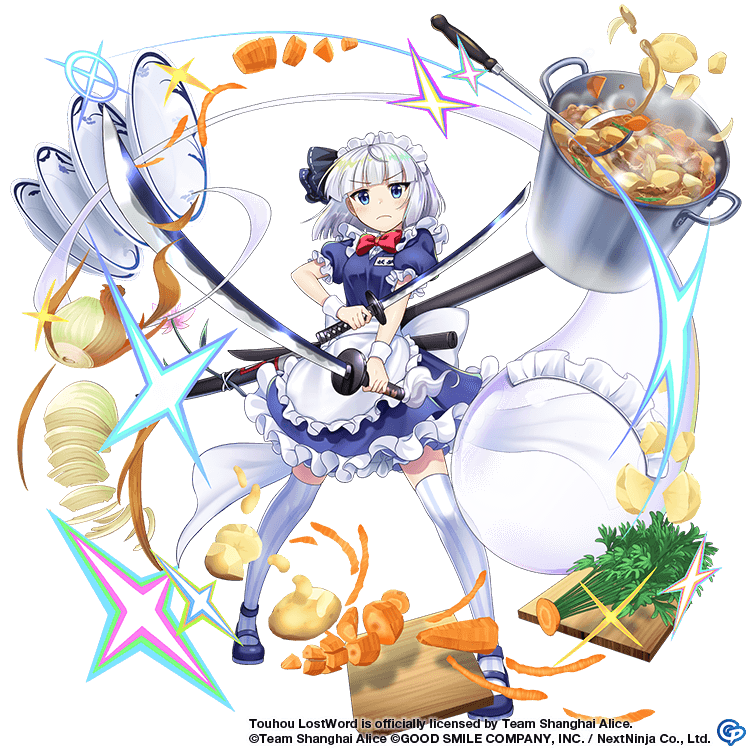 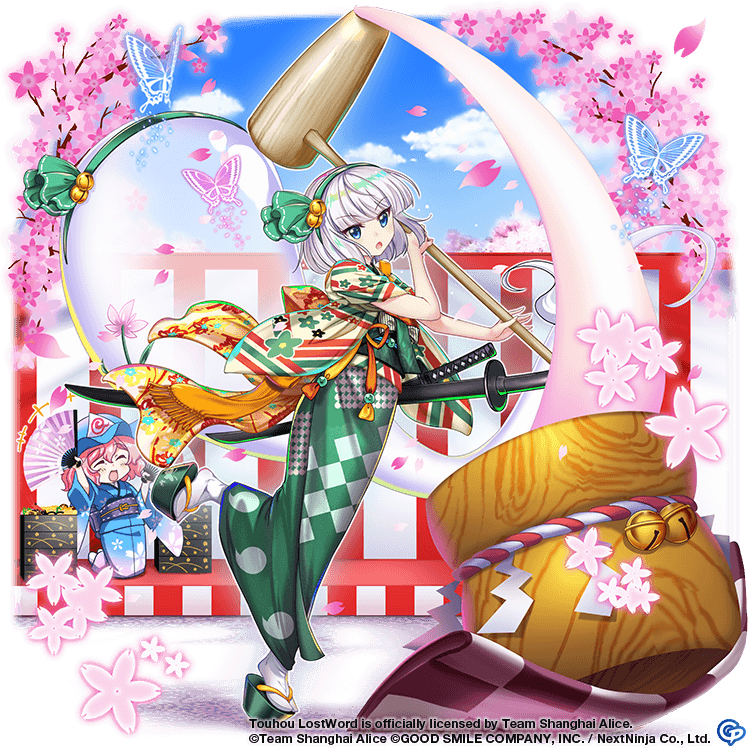 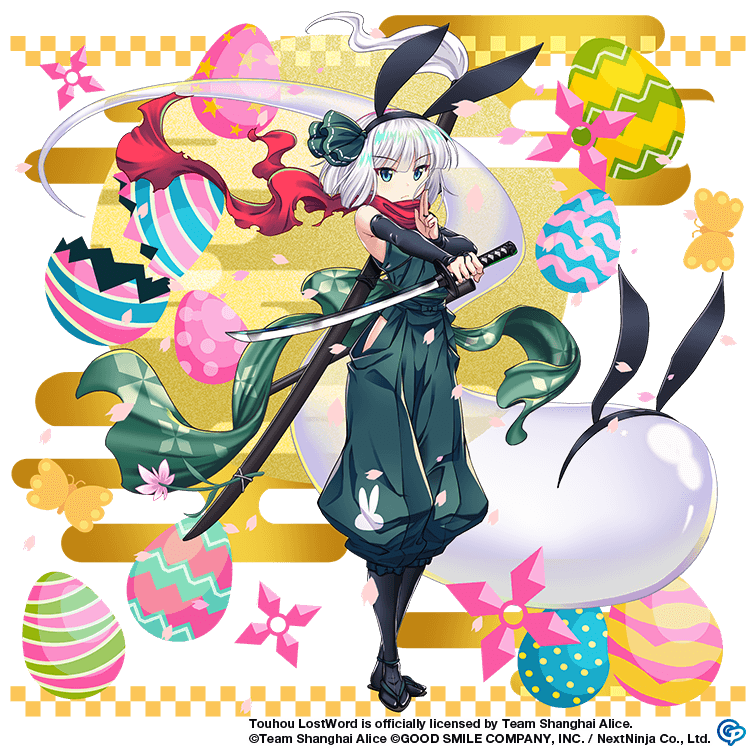 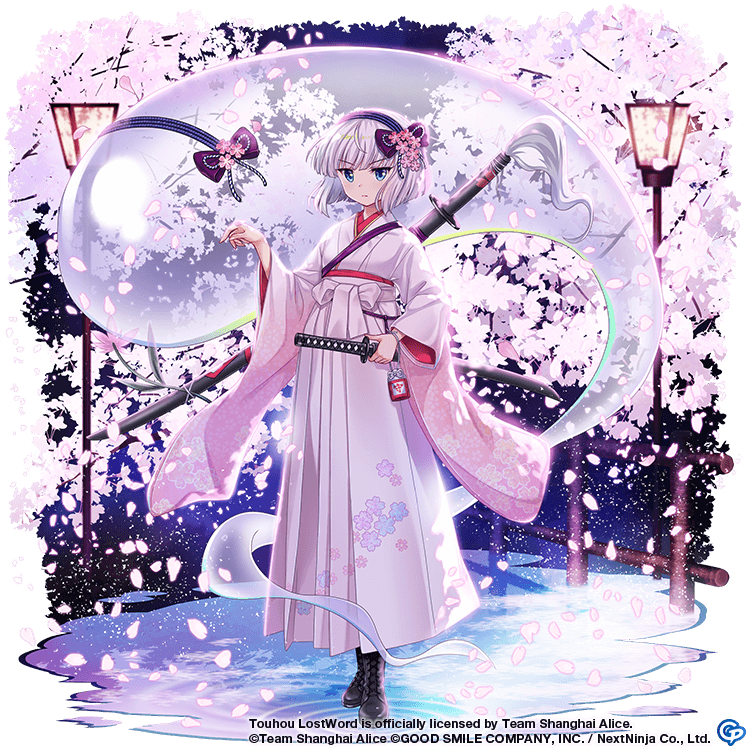 Youmu Konpaku's Spread Shot. She lets her sword aura fly at her target in this bullet hell attack. Sword aura refers to the spirit a sword wielder lets out, but Youmu actually uses that aura itself to attack.
Lotus Posture Slash

Youmu Konpaku's Focus Shot. This bullet hell attack features her two swords swinging down in a cross, glinting as they hit their target. The distinctive name comes from a Buddhist term, as do the names of some of Youmu's other attacks. 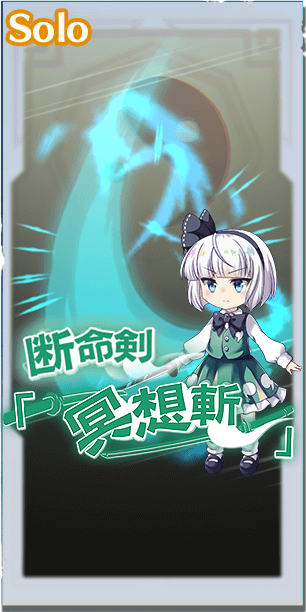 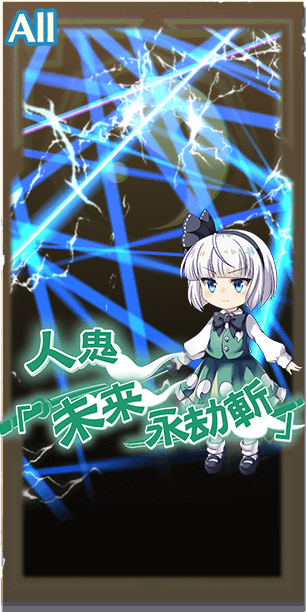 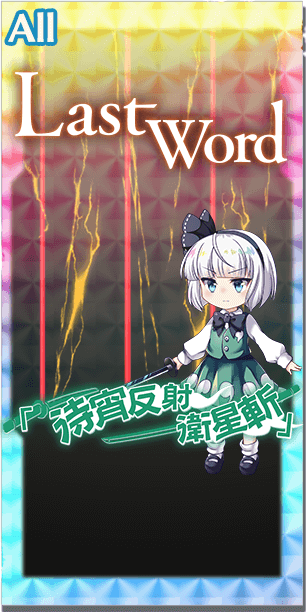 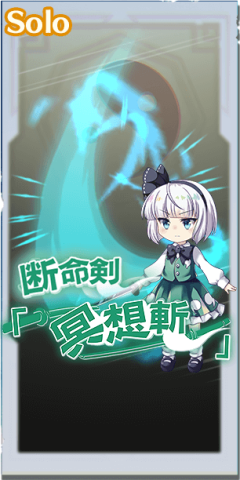 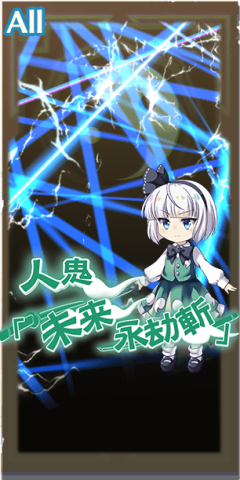 Youmu Konpaku's Spell Card. It slashes in all directions and cuts through both the living and the dead. Since Youmu isn't using her shorter sword, the Hakurouken, this attack won't be sending any of the people she cut to nirvana.
*Pre- and Post- effects assume max level. Effects per level can be viewed here.
Pre-Attack Spell Card Effects 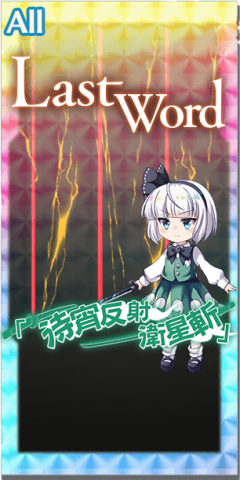 Youmu Konpaku's Last Word. An incredible slash attack that activates with a delay. It seems to use the power of the matsuyoi moon, which appears on the night before the harvest moon. Perhaps what we see is actually the reflection of the attack coming back down after reaching the moon... That might sound unbelievable, but this is Youmu. She could do it.
*Pre- and Post- effects assume max level. Effects per level can be viewed here.
Pre-Attack Spell Card Effects

Youmu Konpaku was released on May 11th, 2021 as part of the starting roster.

The gardener and swordplay instructor of Hakugyokurou, Youmu Konpaku is the dutiful half-human, half-phantom servant of Yuyuko Saigyouji. Skilled in handling all manner of swordplay techniques, she's a straightforward, diligent girl with a fear of ghost stories and a bit of a foolish, one-track mind. But don't let that fool you, her mastery of swordplay leads her to excel in all areas of the game. For this reason, Youmu is the poster girl of a A+ Tier Friend.

When it comes to farming, Youmu once excelled, but has begun to lag behind as other units begin to catch up to her or exceed her. Whilst she'll still serve you well in the early stages of the game, it's in your best interest to Fantasy Rebirth this samurai ghost girl and make her excel in harder fights, and leave the farming to everyone else. Kind of like how she's technically a gardener, but all we see her do is flail her swords around...

For difficult content, Youmu brings a ton of damage. To some extent, her flaws as a unit start to matter more - her access to elements is merely average, and her Last Word's abundance of Moon element also remains something of a double-edged sword, lowering her damage against Moon-resistant enemies. However, her damage potential is so fantastic she's still worth bringing, with her 3 Point Last Word dealing a tremendous amount of damage, with All-targeting to end the fight in a single, decisive moon-reflecting slash. If that's not enough, or for fights where a Full Break is not required, it also brings 1.8 levels of both Yin and Yang Def Down for 2 turns, meaning it's useful no matter what attackers you bring. Unfortunately due to being on her Last Word, the Def Down may land after faster attackers attack first, meaning it requires some careful usage to maximize its output.

Overall, Youmu is a useful addition to any player's roster. A fantastic farmer and great at hard fights too, there's almost nothing her Roukanken can't cut.

For Youmu's Spell Cards, anything that boosts Accuracy, or grants Spirit Power will suffice, like with most characters. If we go by simplicity, Accuracy UP cards like Valued Tools of Trade is generally preferred to ensure a Break will land, but Spirit Power UP cards like Witch of Scarlet Dreams can be useful to fuel the next Spell Card used.

The Mysterious Sword Master card is an advanced option for when you want her Spell Cards to deal high amounts of damage with perfect accuracy. Another card to consider is Good or Evil? as it provides both YIN ATK and YANG ATK UP buffs as well as an equal distribution of YIN ATK and YANG ATK stats. However, Youmu will see minimal benefit from it as she already boosts her ATK UP stats by so much.

If you're looking for what stat sticks to equip for her, it is generally recommended to go for YIN ATK + YANG ATK stats, prioritizing higher YANG ATK as her Last Word consists majorly of YANG bullets. Currently, the best option for this criteria goes to Congress of Sages, with its fair balance between high YANG ATK stats and average YIN ATK stats.

Mysterious Sword Master was made for Youmu - she's even featured in it! It's so made for her, in fact, that using any other Story Card is a huge damage loss. You can use Accuracy UP instead if you don't have any copies, just be warned her damage will be considerably lower as a result.

+ Extremely damaging Last Word both at 1 and 3 Power
+ Last Word brings 1.8 Levels of Yin and Yang Def Down
+ Access to Metal and Moon element attacks

- Below average access to Metal and Moon element attacks
- Moon element is on Last Word, requiring sacrificing its damage potential to Break enemies, as it won't really benefit from the Full Break unless the first or second Moon bullet Breaks the foe.
- Def Down is on Last Word, which can make utilizing it awkward
- Purely a selfish buffer and attacker