Should You Pull? Creators of Fiction? & Fact 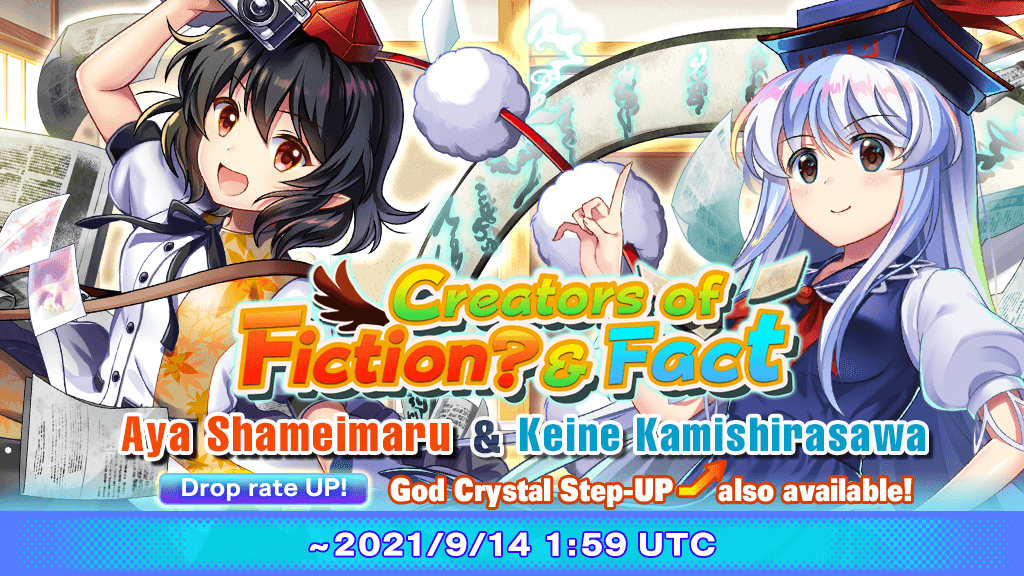 This banner’s a great idea if you’re interested in another All targeting nuker with some Yang DEF support. Keine Kamishirasawa is definitely the more appealing half of this banner, due to her absurd levels of party wide Yang DEF UP on top of being a competent damage dealer. Aya Shameimaru isn’t terrible, but she only really brings a Solo nuker and slow accuracy support to the table, which is fairly average. Whilst far from bad, you’re probably going to pull on Aya moreso because you like Aya, rather than her being anything special. This is a general banner, so both units will be available after this banner ends on any future banners. 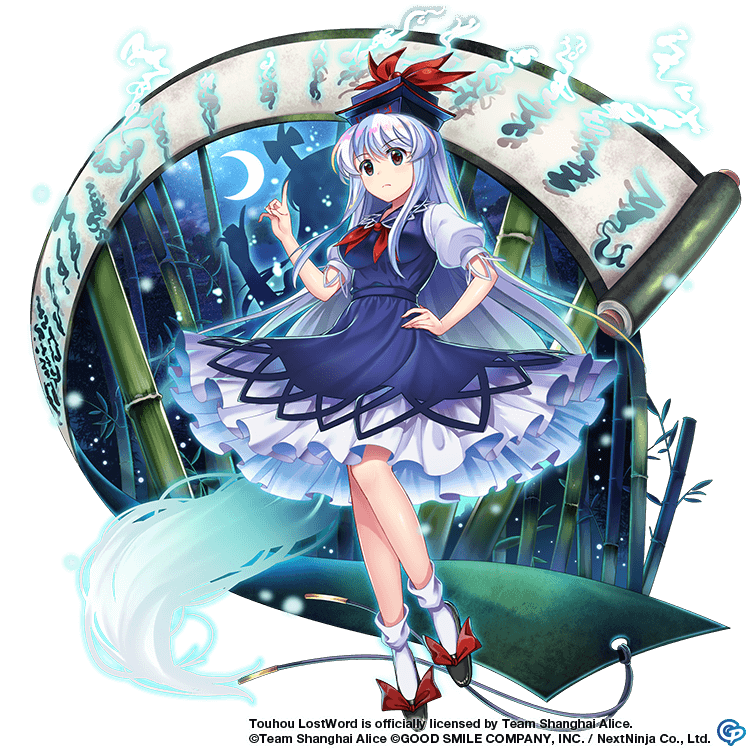 +Rather high damage All targeting Last Word that can farm

-Low Focus UP for a tank. 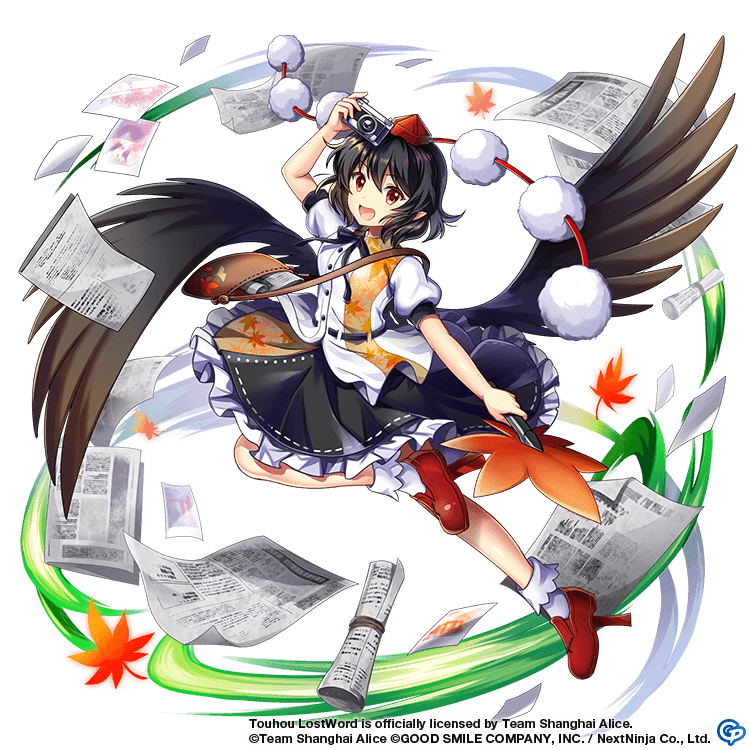 +Reasonably damaging Solo Last Word that scales well with setup
+Slightly above average access to Wood Breaks
+Reasonably good Team-wide Accuracy support, albeit slow due to being on a Spell Card
-Low turn counts on buffs forces Aya to choose between setting up for damage, or for Breaks
-Damage output doesn’t quite match other Solo targeting Last Word juggernauts, now or in the future 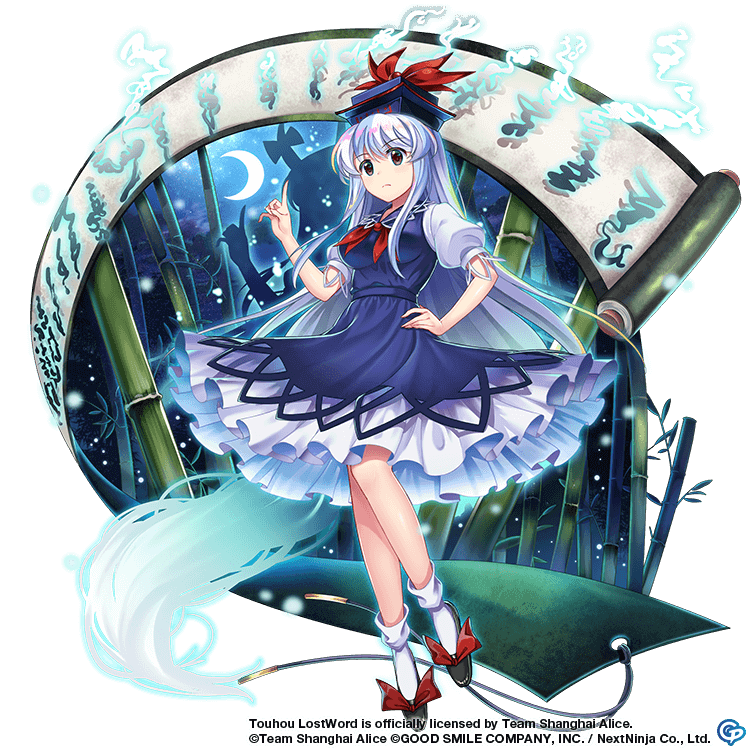 Keine Kamishrasawa, the History-Eating Half Beast, is a were-hakutaku - that is, she’s half human, half youkai. As a human, she protects the Human Village, serving both as a teacher to its children as well as a guardian against youkai, alongside helping out with odd jobs here and there. This is complimented by her ability to hide history, which allows her to completely hide the Human Village from any would-be threats. Under the light of the full moon, she takes on her hakutaku form - gaining horns, a tail, green hair, and the ability to create new history, although she hasn’t been shown to use that power. Overall, Keine’s a friendly, loyal teacher that just about any human can be safe with - and even youkai, if they behave.

Complimenting this is her All targeting Last Word, Emperor of the Land of the Rising Sun. Possessing 50% Hard and 100% Hard on the first and second + sixth bullets respectively (meaning either 50% or 100% of her Yang DEF is factored in for damage), she makes the most of her abundance of Yang DEF UP. Additionally, it also has the extremely powerful Gensokyo Killer on bullets 3, 4, and 5, meaning that it will Crit the majority of the cast automatically. However, due to Keine’s relative lack of Yang ATK UP (only getting 2 Levels from her first skill Lecture), she will need additional Yang ATK support to make the most of this. Still, even without ATK UP support, she will match other S tier attackers such as Ran Yakumo, so she’s no slouch for damage.

However, the sun can’t shine forever, as it must make room for the moon. Likewise, Keine isn’t perfect - notably, her Break potential is absolutely atrocious. Both of her Spell Cards only have 2 Breaks for 2 Power - Metal with Solo targeting on Land Sign: Three Sacred Treasures - Sword (which provides 1 Level of Spirit Power as well) and Sun with All targeting on Light Sign: Amaterasu. Additionally, whilst 5 to 7 Levels of Yang DEF UP for your Hard attackers sounds extremely attractive, it’s not quite as good as you might hope, as most Hard attackers already have a fair few Levels of Def UP in their kit and thus get diminishing returns from further Levels. Lastly, her Focus UP for a tank is somewhat lacking - having only 4 Levels of Focus UP for 3 turns from her first skill (which is somewhat at odds with using it for Yang ATK UP without careful use of Yang ATK UP Story Cards), and 1 Level of Focus UP as a 100% chance on her Focus Shot (which...you don’t really want to use her Focus Shot if you can help it, unless she’s out of Spell Cards).

Still, Keine’s a fantastic attacker and the extra damage she provides to Hard attackers is nothing to scoff at. Just keep her downsides in mind, lest she give you one of her infamous headbutts and force you into extra school lessons. 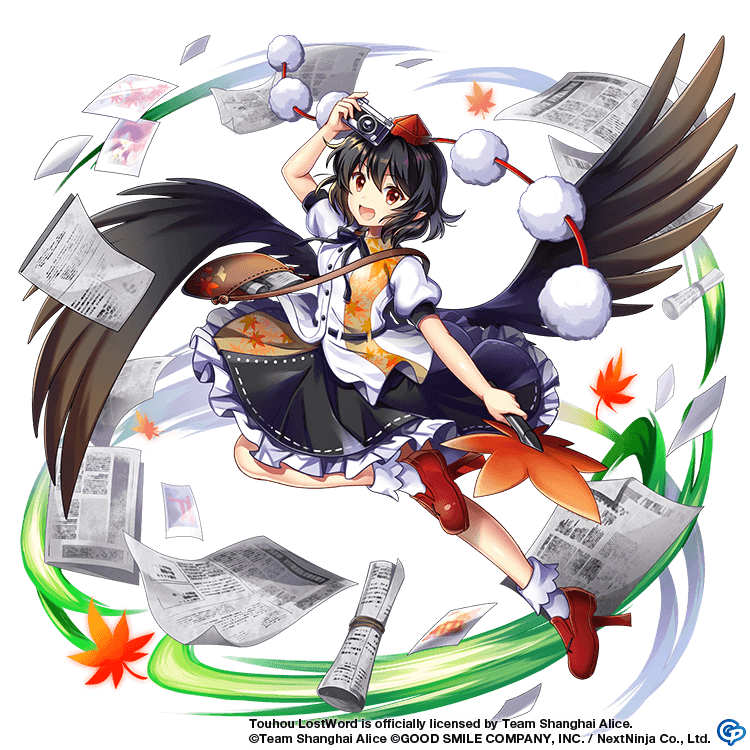 Whilst the tengu are all Gensokyo’s local paparazzi to an extent, Aya Shameimaru is the most prominent news reporter of them all. Within the pages of her newspaper, the Bunbunmaru News, everything gets reported. From incidents to scandals to everything in-between, nothing escapes the Wind God Girl’s notice. Of course, this has also given her a reputation as something of a pest - but Aya doesn’t care, she only slightly exaggerates her articles after-all, and it’s all for the sake of news. Whilst the fastest being in Gensokyo, with the power to manipulate the wind (summoning whirl winds, gale winds, and the like), and strength that surpasses even many other Tengu, Aya doesn’t actually use her full strength much. She prefers to draw her fights out, and focuses more on getting a scoop rather than winning brawls - though she still winds up doing it accidentally from time to time. That’s all you need to know about Aya - she’s not about winning or losing, showing off her might or anything like that, she’s just here for the scoop. No matter what it takes to get it.

She’s also probably one of the most prolific characters in the series, and if you spend any amount of time with Touhou, be it the official stuff or fanworks, you’re gonna run into this charming bastard of a tengu a whole lot.

In LostWord, Aya’s main selling point is almost entirely in her Solo targeting Last Word - Shutter Chance Izuna Drop. It has rather potent Slicing - at 50/50/55/60/60/70% on the 1/2/3/4/5/6th Bullet (meaning that much of her Agility is factored into damage calculations). Complimenting this is an abundance of both Agility UP and Yang ATK UP - 2 Levels of each for 3 turns on her Last Word, 1 Level of Agility UP for 1 turn on her second skill, Tengu Gale, and 3 and 2 Levels of Yang ATK and Agility UP for 1 turn on her third skill, Tengu Rain of Stones. Finally, it also has a 1-3-1 layout, meaning it’s stronger in longer fights.

Whilst reasonably potent, if not particularly remarkable for 1 turn farming (such as events), where Aya is at her best is in longer, harder fights, which give her the chance to set up. The rest of her kit compliments this - her first Spell Card, the Solo targeting Whirl Sign: Maple Leaf Fan, provides her with 3 Levels of Yang ATK UP for 2 turns, and her second Spell Card, the All targeting Illusionary Dominance inflicts 3 Levels of Evasion DOWN for 2 turns on all enemies - which also doubles as pretty strong Accuracy support, albeit slow due to being on a Spell Card. Both Spell Cards also pack an above average amount of Wood Breaks - 1/2/3 for 0/1/2 Power and 1/1/3 for 0/1/2 Power respectively. Unfortunately though, as Aya is forced to use Story Cards with Yang ATK or Agility UP for 3 turns in order to preserve her buffs, you are forced to choose between using her Spell Cards to Break, or to enable her to do damage.

Still, overall Aya’s a solid Friend, she’s just not anything particularly special, with a fairly focused kit in a game where situations that call for it are less common than one might like. Just know what you’re getting out of her (and that she’s expecting to get a big news scoop out of you), and you should get along like birds of a feather.