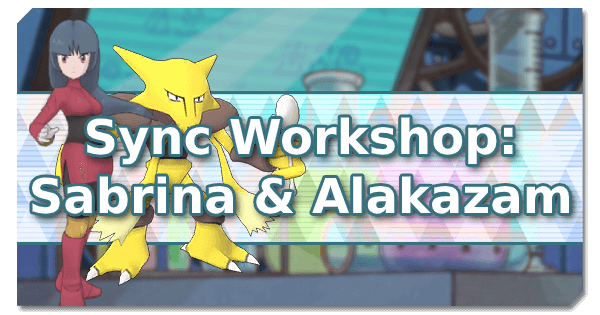 Sabrina & Alakazam's sync grid is plainly great. It offers a plethora of different options that can take this sync pair into a number of directions. The most common way to use them is in a supportive role, and this can be done in an offensive format as exemplified in the Generalist Support build, or in a more defensive manner as with the Reflect Support build. Finally, the Mega Alakazam build takes the plethora of great offensive tools that Sabrina & Alakazam has and weaponizes them directly in order to make Alakazam into a great pseudo-striker with surprisingly high damage. 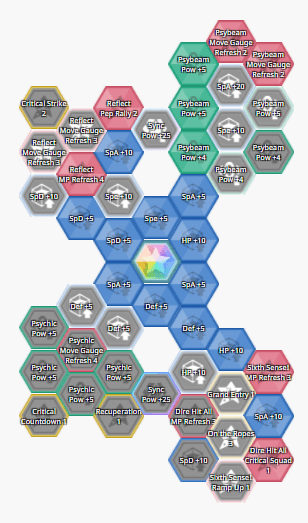 Sabrina & Alakazam make for one of the top supportive sync pairs in the game, and this grid exemplifies most of what makes them shine. Sixth Sense! MP Refresh 3 is the bread-and-butter for this sync pair due to the move’s massive utility. Dire Hit Critical Squad 1 effectively turns Dire Hit into Dire Hit+. Two Psybeam Move Gauge Refresh 2 nodes give great odds of refunding gauge on Psybeam’s use, and can even refund both bars at once from time to time. And finally, Reflect MP Refresh 4 and Reflect Pep Rally 2 give Reflect a very high chance of giving additional uses, as well as a speed boost with the potential to max the whole team’s speed on a favourable MP refresh roll.

This grid gives some of just about everything, and can work on most teams extremely well. Cyrus & Palkia and Lance & Dragonite absolutely love this setup as it fills basically every hole in their kits perfectly. Other special attackers with holes in their kit like Caitlin & Reuniclus fill in amazingly well with this set, and even physical attackers like Kris & Feraligatr appreciate the multitude of boosts that this set can give, though they do miss out onSixth Sense!’s special attack boosts. Sygna Suit Blue & Blastoise are also noteworthy for their ability to boost both defenses and increase attack, which makes for an all-inclusive team core that can potentially max every stat.

This set has viability in basically any format. The MP refreshes on most skills let them operate across multiple levels of the villa, but they can also ensure longevity and outstanding boosts in single battle formats like the Legendary Arena, the Champion Stadium, and even Full Force battles. This set really is one of the truest generalist support builds in the game. 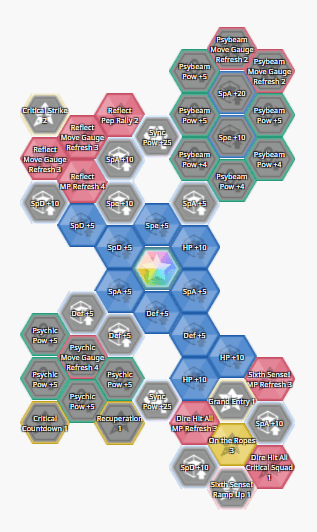 Reflect is a very powerful defensive tool, and can be worth leaning into when facing opponents that rely on physical attacks. Sixth Sense! MP Refresh comes standard, as does Dire Hit All Critical Squad 1. Dire Hit All MP Refresh 3 is next, which gives Sabrina & Alakazam more utility across multiple fights, and On The Ropes 3, which makes Alakazam even harder to break on the physical side if taken to the brink without fainting, which is likely given what comes next. Reflect MP Refresh 4, Reflect Pep Rally 2, and two Reflect Move Gauge Refresh 3 nodes turn Reflect into a monstrous skill that has great odds of refreshing, outstanding odds of refunding one or both bars of its gauge cost on activation, and the ability to raise the entire team’s speed.

This set is outstanding when paired with many tanks, but it has maximum utility against opponents that use physical attacks almost exclusively for obvious reasons. Jasmine & Steelix love it, as it not only patches up their low speed and provides healing in Sixth Sense!, it also raises their sky high defenses to absolutely stupid levels, making them nearly invulnerable to most physical threats. Sygna Suit Blue & Blastoise also appreciate the boosts that this set grants, as it can patch up their low speed, finish off their critical boosts, and make them ridiculously bulky on the physical side. Frail attackers like Lusamine & Pheromosa also appreciate this set, as it can give them the chance to survive more AoE moves and power through with their devastating attacks. It can also help make sync pairs with high special defense but lower physical defense like Rosa & Serperior fare better in more situations.

Definitely more niche than the previous grid, but if played to its strengths it can be even stronger. While it’s less viable in the Battle Villa due to its focus, it can work wonders in the Champion Stadium against physical opponents. It can also be great in the Legendary Arena to help deflect strong physical moves, though all Legendary Arena bosses have had mixed sets so far. 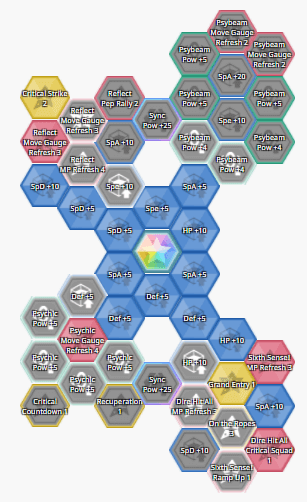 Unlike most support units, Sabrina & Alakazam have the potential to act as a very powerful pseudo-striker. Sixth Sense! MP Refresh 3 and Dire Hit All Critical Squad are first because of their huge offensive power. Critical Strike 2 grants a straight 20% damage bonus considering Alakazam’s maxed critical rate after buffing, and Psychic Move Gauge Refresh 4 helps free up the gauge a bit after Mega Evolving. Grand Entry 1 actually has an interesting niche here as it activates when Alakazam takes the field, and then activates a second time on Mega Evolution. This gives a +2 boost to Special Attack and lets Sabrina & Alakazam save uses of Sixth Sense! for later in the battle when its healing qualities can be very valuable or for subsequent battles in the Villa. Finally, Reflect Move Gauge Refresh 3 is mainly here to reach Critical Strike 2, but it’s not exactly bad on its own and can be situationally helpful.

Because Sabrina & Alakazam will take up more role real estate given this set, they appreciate a bit of support themselves. Skyla & Swanna can boost Alakazam’s blazing speed to crazy levels while also boosting team defense and keeping the team healthy. Sygna Suit Blue & Blastoise can tank amazingly well, boost special attack 3/2 of the time when hit, and boost both physical and special defense. Sygna Suit Leaf & Venusaur also make great partners for their ability to drop enemy special defense, count down the sync counter, and provide even more healing. Meanwhile, Mega Alakazam’s absolutely blazing speed provides breathing room for teammates to use their own attacks without depriving Mega Alakazam of the bar that it needs to perform its role.

If a Psychic Type weakness comes up, this set can work beautifully. It’s great in the Champion Arena if other Psychic Type attackers like Giovanni & Mewtwo are needed on other teams, or in other multiple team formats like the Legendary Arena or Full Force Battles when multiple Psychic Types are the way to go.

Sabrina & Alakazam would really benefit from having two lucky skills to pick between at will, as the two top picks each support different builds in different ways. Vigilance is the lucky skill of choice for any supportive build, as it keeps Alakazam on the field for as long as possible without having to worry about potentially devastating critical attacks. However, more offensively oriented grids genuinely benefit from Critical Strike 2, as Sabrina & Alakazam can max their own critical rate and deal substantially more damage as a result.