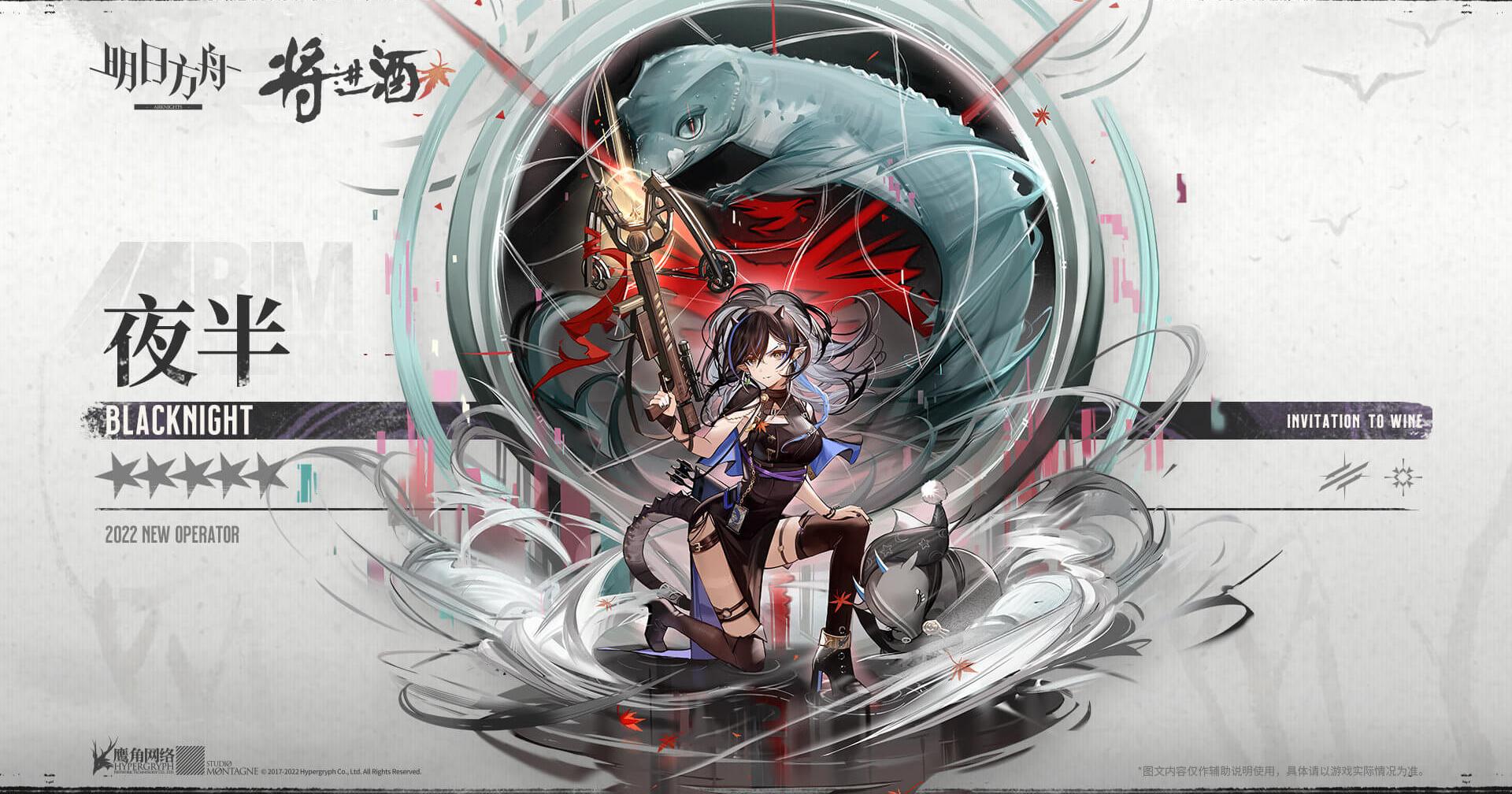 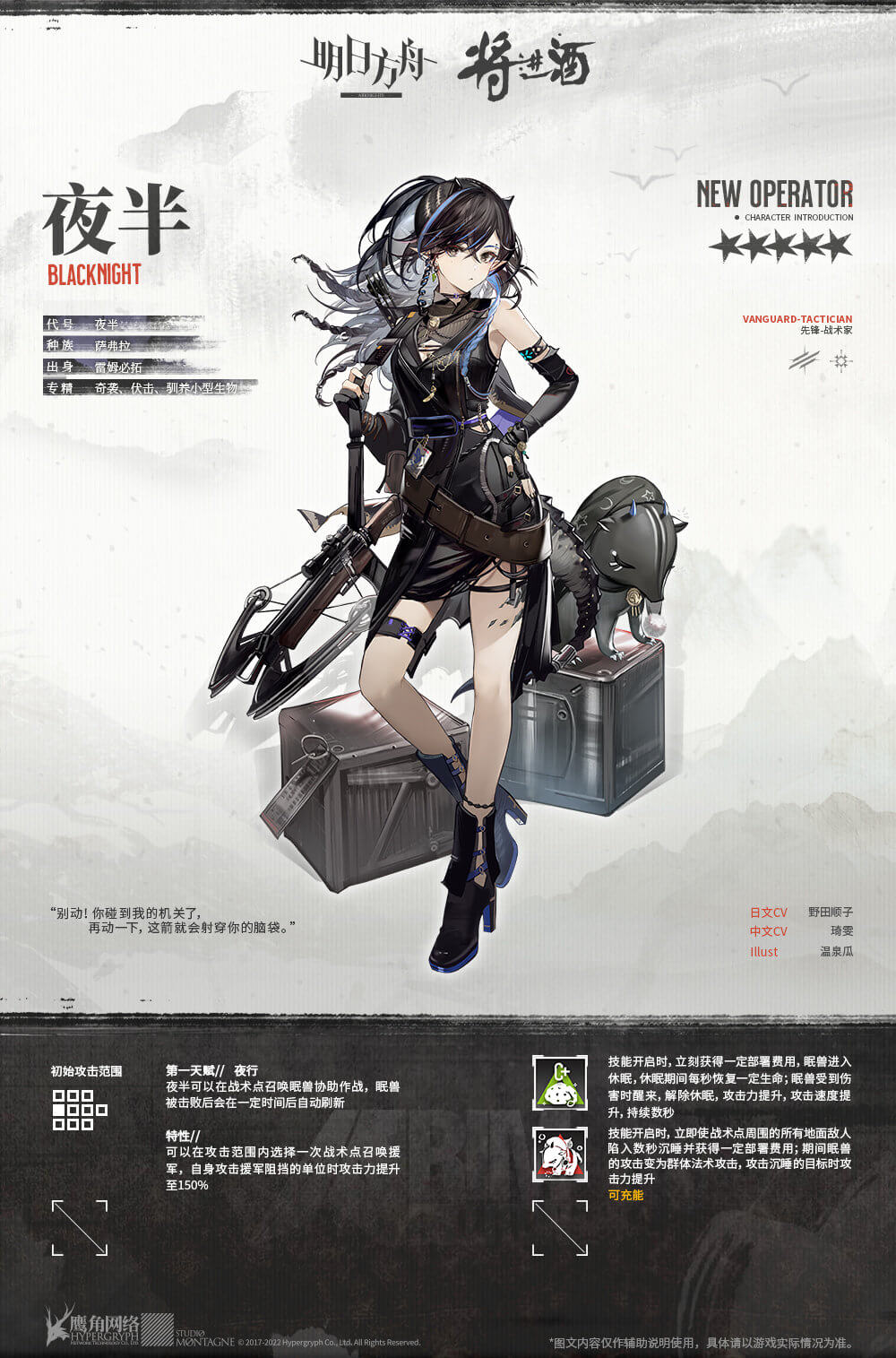 You are Rhodes Islands' finest strategist? Name's Blacknight, and I'll need you to play me in a game. If I lose, you're my boss from then on, and you'll have to teach me well."

Blacknight, a bounty hunter who spent her early years in the wilderness. Registered at some office within the bounds of Great Yen, and logged as an operator of Rhodes Island.

Operator Lee explained that the animal besides her is named a "Badland Long-nosed Slumberbeast", capable of secreting rare hypnotic substances. A reminder to all operators, the slumberbeast may be cute, but please do not approach it without Blacknight's permission, lest there be a sleep-caused work accident.

A notice to all operators suffering from insomnia - if one was to challenge Blacknight and come out conscious through her traps and mechanisms, you can win the chance to take the slumberbeast back to your dormitories. However, if you lose, be prepared to say goodbye to half a month's salary.

"Don't move! You've stepped into a trap of mine. A twitch, and you will find this arrow in your skull.

Blacknight is a 5★ Vanguard [Summoner / Tactician], a ranged attacking unit that can summon a reinforcement.  Her kit revolves around generating DP and buffing her summon, and includes options for healing, Arts Splash damage, and Sleep.

Trait: This unit can designate one Tactical Point within attack range to call Reinforcements; ATK is increased to 150% when attacking enemies blocked by Reinforcements.

Talent 1: Blacknight can summon a slumber beast as reinforcement in battle. When defeated, the slumber beast will refresh after a certain duration

Skill 2: Immediately inflict Sleep to all ground enemies around the tactical point for several seconds and gain a certain amount of DP. Within the skill duration, the slumber beast's attack changes to Arts splash attacks and gains increased Attack Power when attacking Sleeping targets. Can hold charges.

Blacknight will be the second Operator of her Archetype, the first being 4 Star Beanstalk.  They are unique among Vanguards in that they can be deployed on ranged grids, do ranged physical damage, and can deploy a summon within their range.

Her S1 looks very similar to Beanstalk's, in that it will heal the summon, with the addition of gaining extra DPS when it is attacked. Her S2 looks to be the more interesting tactical option, putting enemies near the summon to Sleep, and changing the summons attack type to Arts Splash while enabling it to attack Sleeping enemies.  This not only gives her more interesting tactical options for stalling (potetinally useful in later parts of the stages as well), but also could have interesting interactions with other Sleep-related Operators, most notably Blemishine.

Both Skills generate DP, but she will likely be in a similar situation as her 4 Star counterpart in that their overall DP-generating capabilities fall behind other Vanguard Archetypes like [Standard Bearers] and [DP-On-Skill / Pioneer], so most of the time they will to be used along with another Vanguard to satisfy DP needs. 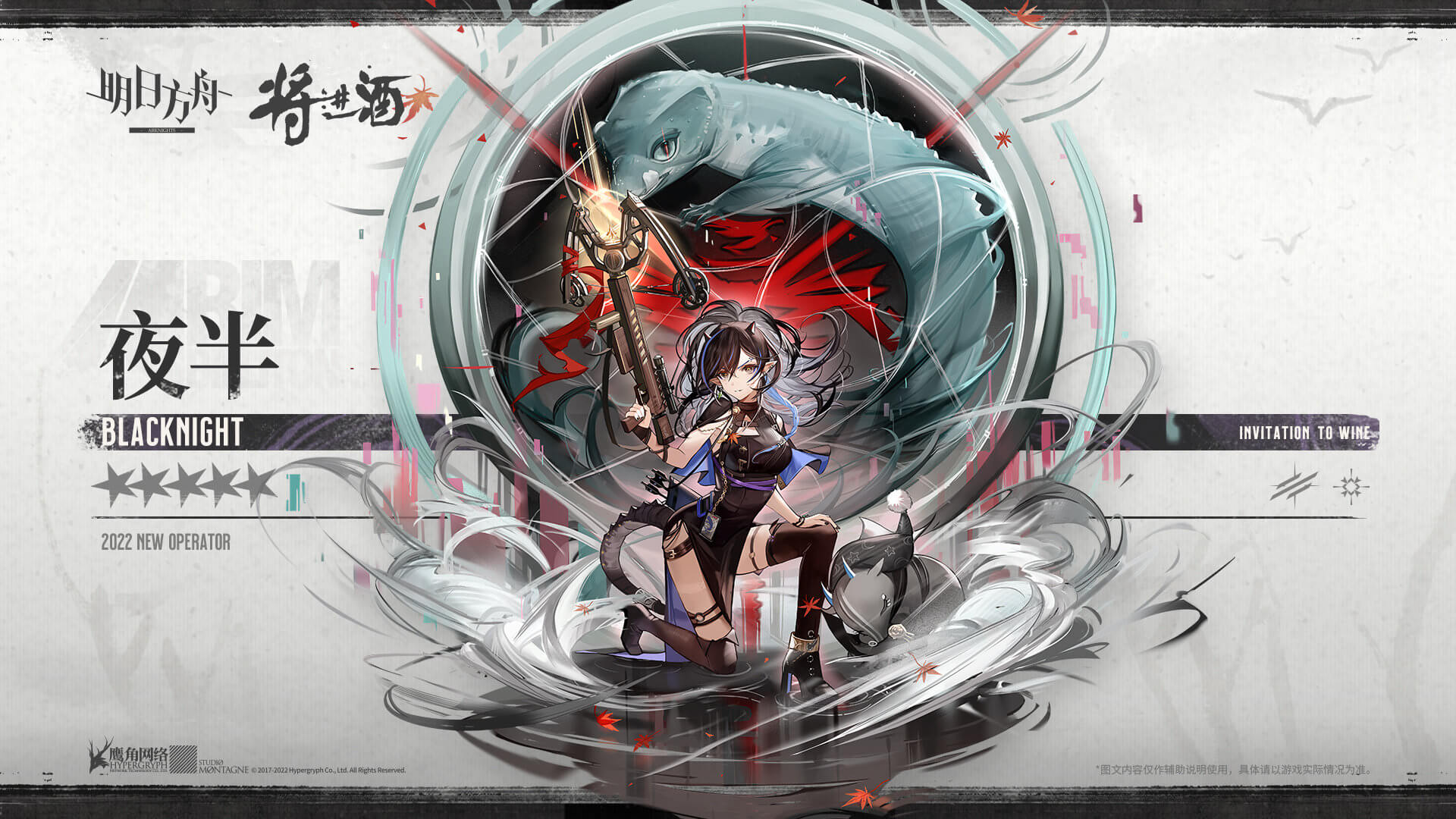