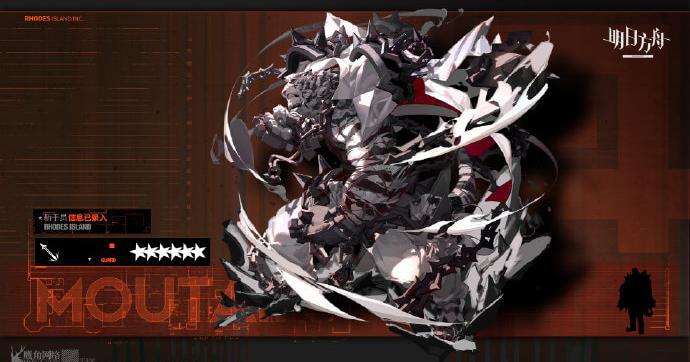 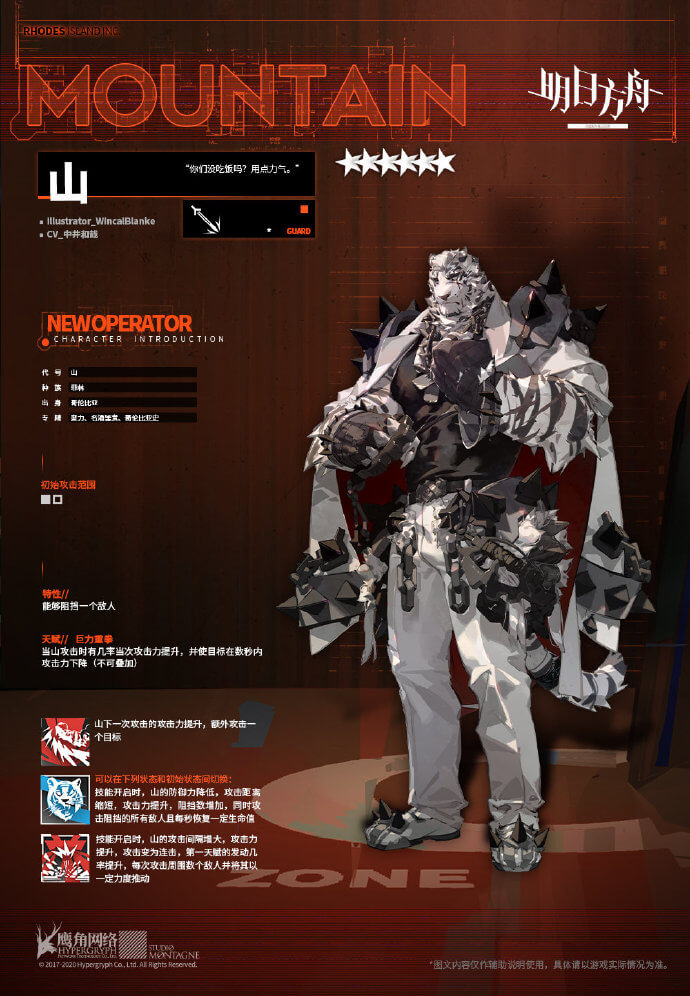 "Since you saved me, then I must be honest with you, Doctor. My target is a certain department within Rhine Lab, if you don't want to damage your friendship with them, you still have the chance to let me leave."

"What are you thinking, Miss Silence?"

"I'm suddenly afraid. Is it right to let you join Rhodes Island?"

"From your description, I think Rhodes Island is quite a good company."

"I know your suspicions, Miss Silence. You're worried about your every choice."

"Regrettably, as the litigant, all I can say is my tenet— We must choose, and be responsible for our choices."

Mountain is a 6★ Brawler Guard that has abilities that can reduce enemy ATK, attack multiple targets, recover his own HP, and push.

Talent: When attacking, Mountain has a chance to increase the ATK of the current attack and reduce the target's ATK for several seconds (cannot stack).

Skill 1: The next attack has increased ATK and attacks an additional target

The first 6★ Brawler Guard arrives on the scene with various tools at his disposal.  His Talent has a chance to increase his ATK and reduce the ATK of his target(s).  Whether the "chance" applies only his ATK increase, or if it includes the ATK debuff as well is not immediately clear.  This could be useful in his own survivability, especially when he is blocking multiple enemies, but could also be used to help out an Operator tanking enemy damage if placed strategically.

His S1 increases his ATK and attacks an extra target.  This skill will probably have an Attacking Enemy SP Charge types, and activate every few hits, much like Indra's S1.  His base Block-1 might limit overall usefulness of this sustained DPS Skill, however.

S2 allows him to switch into an offensive mode that allows him to increase his ATK and Block Count, and to hit multiple enemies equal to his Block Count.  He also loses Range and DEF, however, and Brawler Guards are not known for their high DEF, so this will likely have to be used carefully.  It also comes with self-HP regen, which might mitigate some of the increased damage he'll be taking.

S3 increases the chance for his Talent to activate.  As mentioned earlier, whether this means only his ATK increase, or if it includes the ATK debuff as well is not clear.  He also hits multiple enemies multiple times, and pushes them away.

The biggest weakness of current Bralwer Guards tend to be their block-1, low DEF, and weakness against high DEF enemies because of their low ATK.  Mountain seems to address the first first issue with his multi block and the second issue with his self healing and ATK debuff abilities.  With no Arts option, it seems like high DEF enemies might still give him trouble, depending on where his ATK and ATK modifiers end up falling.  These additions, along with the extra utility and attack options Mountain provides, will hopefully provide a more compelling case to bring this Archetype to battle. 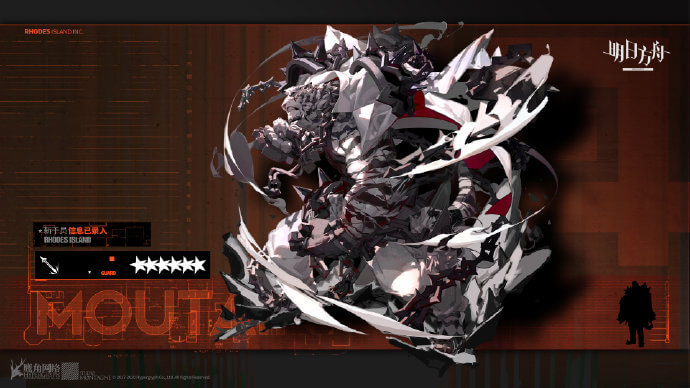 Seriously though, don't poke this guy