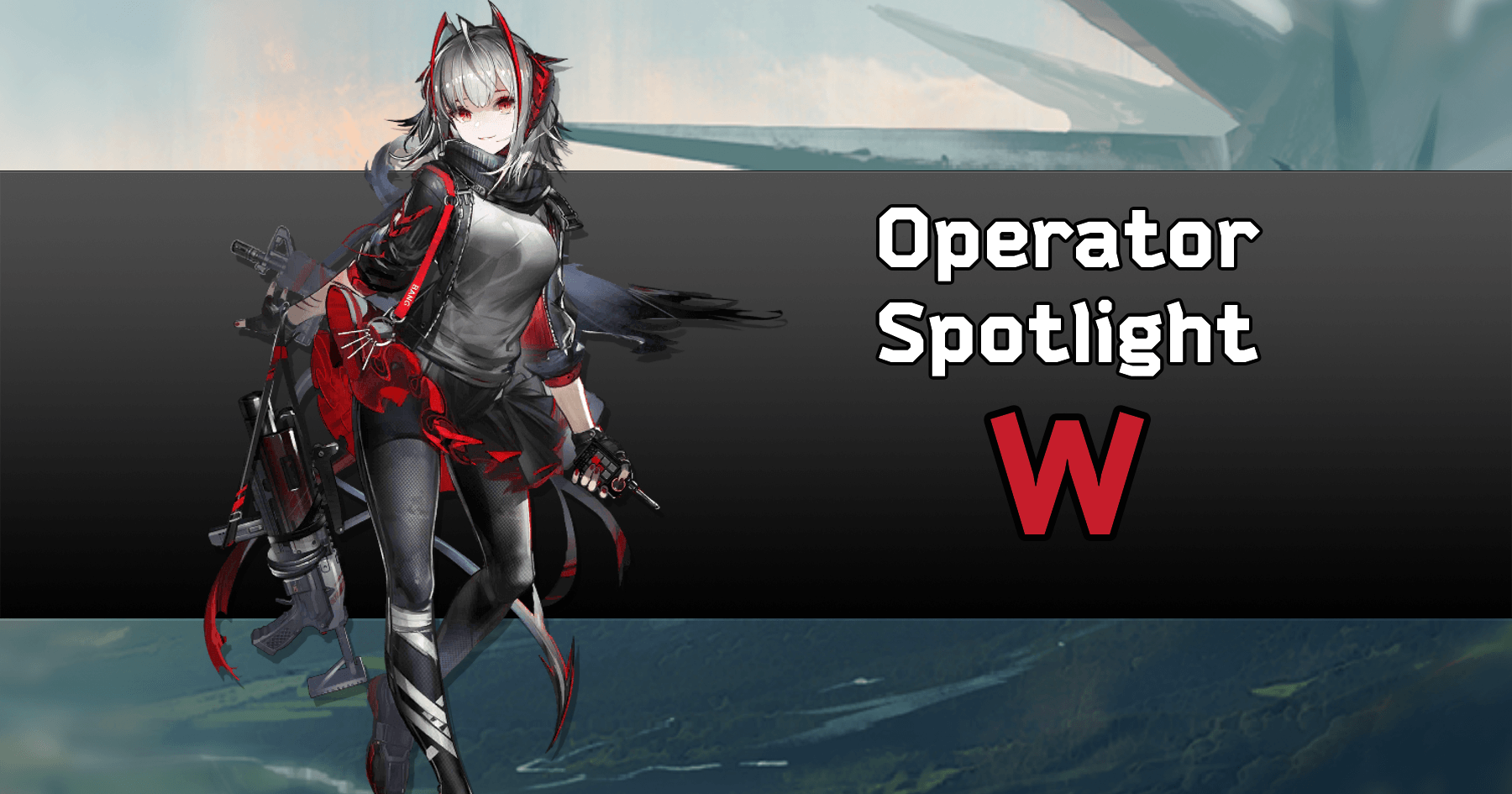 W is a new Sniper in Arknights Global and the first 6★ AoE Sniper Operator to be released. As a prominent antagonist in the first chapter of Arknights and a character with a complex antihero’s backstory, W might be the most anticipated Operator to date. However, more cautious Doctors are probably wondering, “Does she live up to the hype? Is W worth it?” There’s only one way to find out. Let’s take a look at this unpredictable arsonist together.

What Makes W Limited? How Does Her Banner Work?

When pulling a 6★ from this banner, there is a 70% chance it will be one of the rate-up Operators. Furthermore, this banner had its own pity system, not shared with the last limited banner nor other non-limited banners.

However, unlike Nian, this banner has a unique Spark system to help players pull its limited Operator. In a nutshell, players will earn a special currency every time they pull on this banner, and that currency can be exchanged for any of the Operators on the banner. It takes 300 pulls to buy W with this currency. That’s a lot, but at least there’s a point where your pulls are guaranteed to pay off!

What is W’s Role? What Makes W Special?

As stated above, W is a 6★ Sniper and a member of the AoE Sniper archetype. For more details on W’s stats, Skills, Talents, and more, head on over to her Operator page.

W is noteworthy among AoE Snipers for the high damage multipliers on her Skills and the fact that all three of her Skills also cause Stun, giving her some heavy crowd control. Her Talent increases the Physical damage dealt to Stunned enemies within her attack range, and since AoE Snipers have such a long attack range, this is usually easy to trigger.

One of the primary weaknesses of AoE Snipers is their slow attack speed, which reduces their overall DPS. W can work around this weakness to some degree with her S2, which plants landmines that explode when enemies walk over them, functionally giving her extra attacks throughout a battle.

When Should I Use W?

How Does W Compare to Other Snipers?

There are multiple AoE Snipers in Arknights, but W is the first one at 6-star rarity. How does she compare to her 5-star competitors, Meteorite and Sesa? Let’s find out together!

The Problem with AoE Snipers

Hanging over all of these comparisons is the fact that AoE Snipers as an archetype are not very popular in Arknights. Their high DP cost and slow ASPD make them hard to justify using over other archetypes (particularly Anti-Air Snipers, who have low DP costs and very quick ASPD).

W deals a lot of damage when used correctly, despite her low ASPD. Her S2 lets her “stock up” attacks by planting landmines in advance of her enemies, and her S3 can deal tremendous burst damage when timed well (hint: Slow Supporters help a lot). However, the random nature of her S2 can reduce its efficiency, and her S3 has a pretty long cooldown. W is coming out at a time where consistent DPS is slowly starting to become more important than burst, and consistent DPS isn’t really her strong suit.

There are still some situations where AoE Snipers in general and W in particular can really put in some amazing work. However, these situations are still fairly uncommon at this point in time, especially in high-end Contingency Contract content we’ve had to date. This might change in the future, especially for W, considering her burst potential and Stunning capabilities, but for now she’s more a luxury than a necessity.

W is good and worth pulling, but she’s not gamebreaking by any stretch of the imagination. 5-star AoE Sniper Meteorite can usually fill her shoes, and other archetypes are still more generally useful and powerful than AoE Snipers as a whole.

If W is your waifu (that’s what W stands for, right?) there’s nothing wrong with going hog-wild pulling for her. However, if you’re not that invested in her, it’s totally fine to hold onto your resources for an Operator that you need or want more.

If you’re one of the legions of fans planning to pull for W, we at GamePress hope she comes home quickly enough that you don’t have to pity-pull her. Good luck!