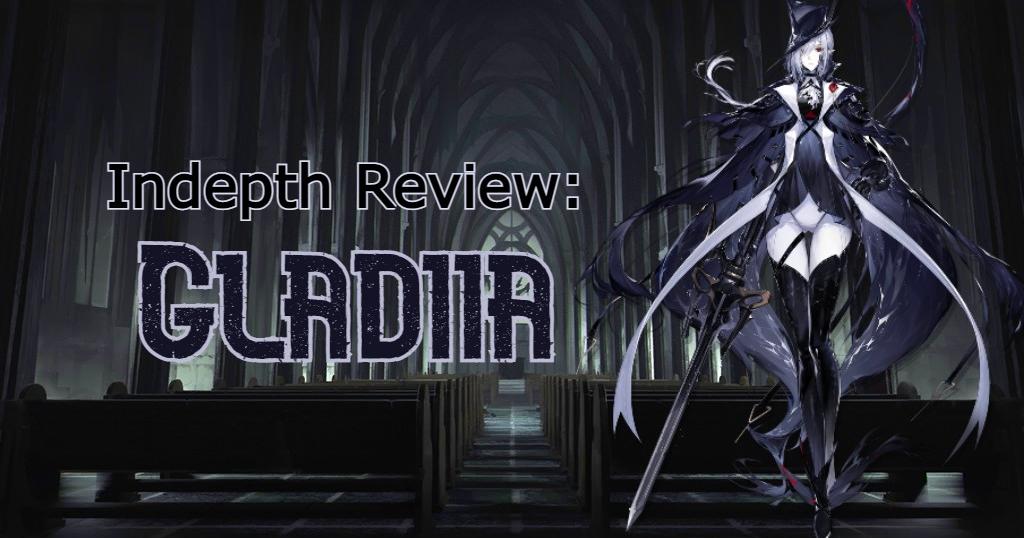 Gladiia is the future 6★ Puller Specialist welfare unit from the Under Tides event. Yes, you heard that right! She’s our first (and so far only) welfare 6★, and she’s coming to take Cliffheart’s spot as the welfare Puller queen. Will she succeed? Let’s find out!

Note that, as a welfare unit, she will be reviewed at her maximum Potential.

Gladiia can be obtained through the Under Tides event missions and shops. She’s a reward for beating stage SV-5, and her Potentials can be bought for a total of 1750 event currency, with her first token costing 250 and each subsequent one 50 more than the last. This makes her the most expensive welfare to date, perhaps unsurprisingly due to her higher rarity.

Gladiia manages to differentiate herself from other Puller Specialists by virtue of her varied kit, containing a little extra in every one of her skills that no other puller can provide. From holding charges to constant pulling and even some stalls and serious DPS. She has a bit of it all! 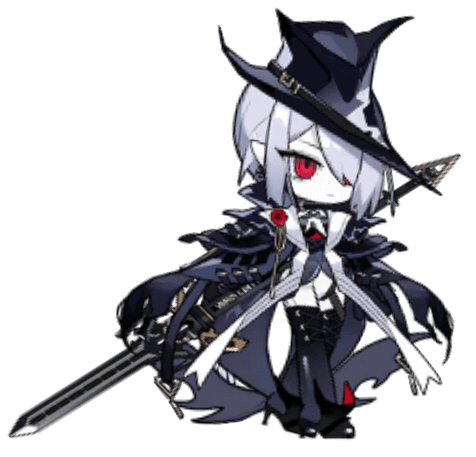 Our first 6★ welfare is... a Bloodborne crossover?

Let’s get the obvious out of the way: Yes, she generally has better stats than every other puller in the game. Her HP, especially, is quite a bit higher than the next best Puller, being Cliffheart. Their Attack is, surprisingly, practically equal, no doubt due to the latter’s Trust bonus spread being completely skewed towards Attack, while Gladiia maintains a good balance of Attack and Defense. Still not enough Defense to beat the tanky Rope, though!

Opposite to what’s usual in regards to the DP Cost (higher rarity units costing more than their lower rarity counterparts), a Max Potential Gladiia is just as expensive to deploy as Cliffheart.

Gladiia unlocks this talent when upgraded to Elite 1. Once deployed, all Abyssal Hunters-affiliated units (Skadi, Gladiia, Specter and Andreana, but not Skadi the Corrupting Heart) gain a permanent regen of 1.5% of their Max HP per second, which stacks with any other regen they might have had, and lets them mitigate 15% of all damage taken by Seaborn units, ubiquitous in the Under Tides event and the eventual Under Tides-inspired Annihilation stage. When upgraded to Elite 2, these bonuses are increased to 2.5% and 25% respectively.

If you like using units affiliated to this faction, or even if you just want to use Gladiia herself as a standalone pseudo-guard, this talent is incredible. While the mitigation effect will rarely ever prove useful once this event ends, the HP regen (which, in case it wasn’t obvious, applies to herself) makes Gladiia both quite a good unit by herself and an amazing team player for the units she supports. With this talent, Gladiia herself will regenerate over 50 HP per second at max level, but even more insane is Specter, who will get a regen of 130 HP/s.

Survival of the Fittest

This simple talent is unlocked upon promoting Gladiia to E2, and its effects are quite straightforward: Whenever she attacks an enemy with a Weight level of 3 or lower, she deals an extra 36% damage. This practically means she will get an attack boost against most non-boss, non-heavily armored enemies in the game (and even some of those still have a Weight of 3!).

Since she is a shifter, this talent also further emphasizes Gladiia’s natural synergy with Angelina, who can reduce the Weight value of all enemies by 1 using her third skill. With this skill active, every non-boss enemy in the game with the exception of Mudrock Colossus and Hexed Colossus will take extra damage from Gladiia.

This skill is unique amongst shifters due to its ability to hold charges, kicking it up a notch in usefulness. Much like many other charge skills, this one starts being able to hold 3 from M1 onwards. Apart from this, Gladiia’s first skill is practically a carbon copy of Cliffheart’s, with the same Large pull force at Mastery 3, same charging time and slightly higher damage, but this time around Physical instead of Arts.

There’s not much else to be said for this skill concerning the Puller niche. It is a direct upgrade over Cliffheart that you can get for free, making her the preferred choice if you want to E2 a Puller Specialist eventually. A more interesting discussion is how this skill, paired with Gladiia’s stats and her passive regeneration, let her act as a decent sustained damage Guard for newer players with underdeveloped rosters. Thanks to her Talent she can also survive for long without much aid, letting her hold lanes for a while before needing any kind of support.

In general, however, I would not recommend giving Masteries to this skill unless you are an experienced player with an extensive roster, and only after you’ve already raised a Pusher Specialist, which are generally the more useful variety of Shifter. That being said, this doesn’t mean this skill hasn’t seen meta usage. During the first CC she was available, Gladiia S1 was used in one of the first Risk 31 clears, showcasing that tech options really shine with their full potential in the hardest content the game has to offer. 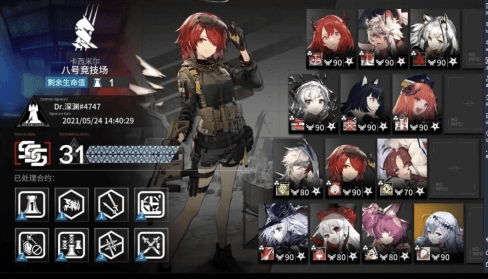 Gladiia’s second skill can also be taken as an interesting spin on Cliffheart’s. The range expansion they both get is the same, and both also pull multiple targets at once (2 for Gladiia, 3 for Cliffheart), but the former has some nice differences that set it apart, most often also making it the preferred choice. At M3, for the entire 20 seconds of duration, every single one of Gladiia’s attack will pull enemies towards her with Large force. Her attack interval will also slow down moderately by 50%, letting Gladiia pull around 7 times in a row while this skill is activated if there are no other buffs or debuffs in effect.

As for the rest of the skill, it certainly loses some of the appeal that Cliffheart has with her True Damage and Stuns, instead being replaced by a slightly lower Physical multiplier with no status effects attached. Thanks to her stat spread, talents and skill cycle, however, Gladiia still manages to do more overall damage until really high enemy Defense values, where Cliffheart’s damage type proves more useful. Interestingly enough, Gladiia’s skill also prioritizes pulling blocked targets, which may come in handy in some situations.

As with her first skill, it really shines as a tech option for really hard content, and much like it, it has also seen usage on some of the very first (and only!) clears of a certain Max Risk Contingency Contract season (Max possible Risk, that is). In CC#6 Wild Scales, Gladiia is able to adeptly utilize her range increase and constant pulling skill to abuse the only hole in the entire map to quickly and effortlessly deal with some dangerous targets.

Gladiia’s final skill brings a lot to the table as well, acting as both AoE DPS, support and even stalling. Once activated, Gladiia immediately summons a Maelstrom centered on one enemy (prioritizing enemies further away from herself) with an area equivalent to a 3 by 3 tiles square. The enemy onto which the Maelstrom spawned will be bound for the entire 8 second duration of the skill, while all enemies inside the tornado’s area will have their movement speed debuffed by 50%, take 130% of Gladiia’s attack as Arts damage every 1.5 seconds (for a total of around 5 attacks) and be pulled towards the eye of the storm with Large force. At the end of the skill, all enemies still alive will be pulled towards Gladiia with Large force as well. If you’re having trouble understanding everything this skill does, imagine Gladiia summoning Mint in the middle of the battlefield, the effect is practically the same, but better.

Speaking of Mint, this skill makes for quite a nice synergy with all sorts of AoE damage dealers, even letting Passenger easily nuke groups of enemies with his third skill.

Overall, this is quite a nice skill, even if the uptime leaves it a bit to be desired. Used as a burst skill it can work pretty decently, and it definitely has potential as a more technical option for harder content, even if it has yet to see any usage.

So, should I purchase Gladiia? Is it worth dumping so much event currency into getting her full potential? Will I even need her if I already barely use Cliffheart? The answer, in my opinion, is MAYBE. There’s no doubt that you should purchase all her tokens if you value Yellow Certs at all, since a rerun of this event will let you get away with quite a handful of them, but as a battle operator she may not be exactly what you’re looking for. While very late endgame players will be able to find use out of her technically-oriented skills and newer players will enjoy having such a strong and reliable pseudo-guard as a free option, players in the middle will find her kit not that useful for the kind of situations they will be facing. Definitely buy her, but think twice about whether or not you’ll get any use out of the materials you’ll be investing on raising Gladiia. 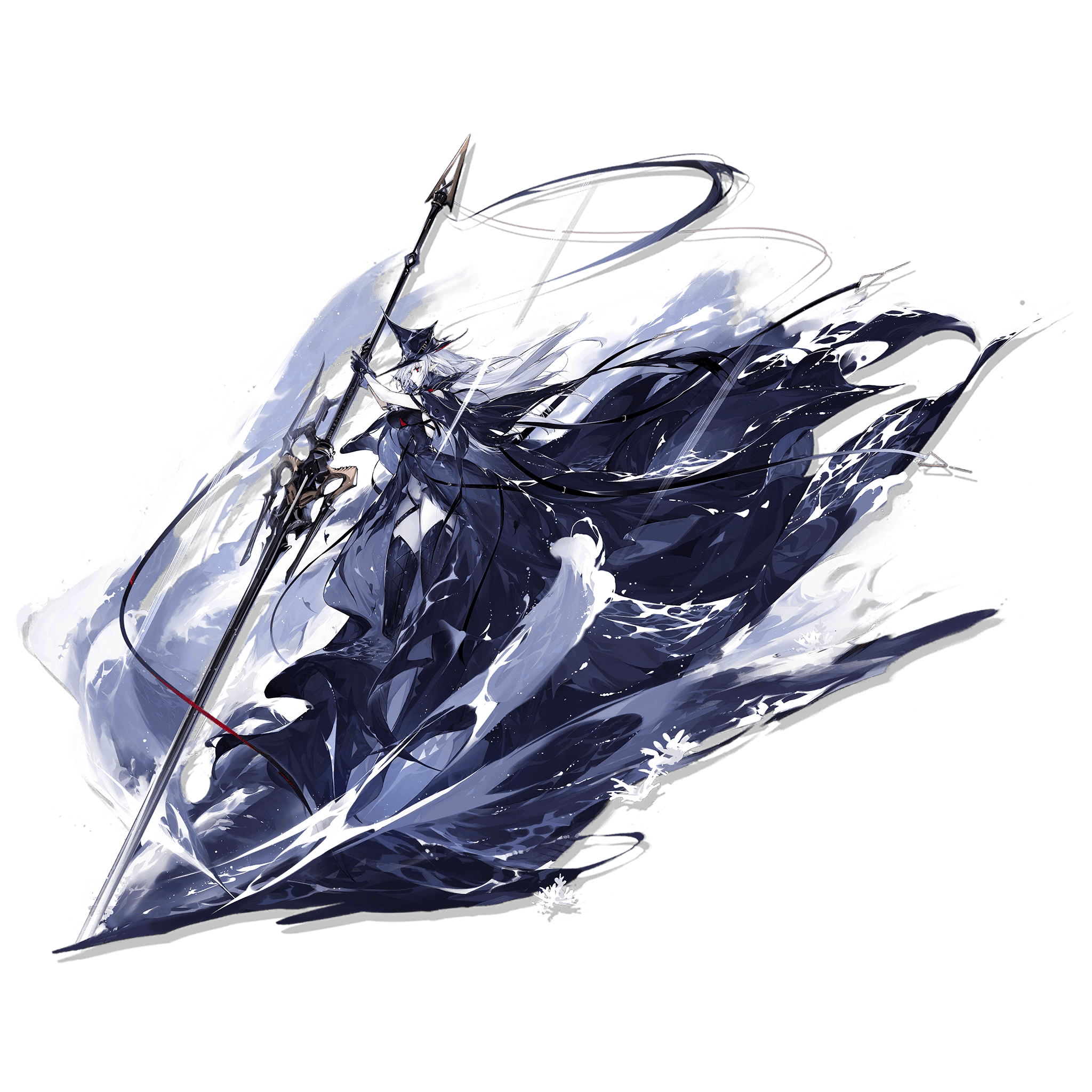