As a support with increased Buff Time, Aeleen is perfect on teams with Doublebuff users such as Louise. Even without those effects, the Defense Up buff reaches a decent magnitude and Slayer’s Strength facilitates improved damage on longer fights. 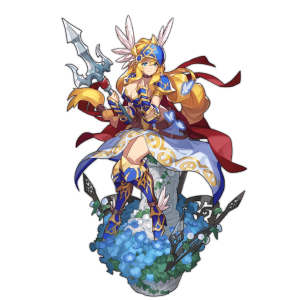 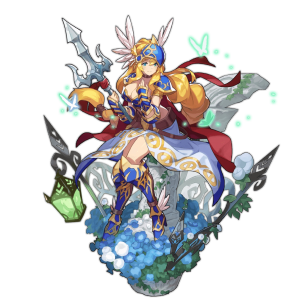 Aeleen was one of the few units at launch who provided decent support utility for the wind element early in the game's lifespan. However, in current times Aeleen is heavily outclassed for defence buffing by the meta defining Templar Hope. And while the damage provided by Valkyrie Blast is respectable and frequent enough to use, her lack of passive ability synergy ensures she has a challenging time at damage output for current endgame content.

With the Buff Skill Time passive ability, Aeleen is able to extend her buff skills by 25%, allowing her to be a decent support option if equipped with a skill haste and buff time setup, as well as buff skillshares.

With her Valhallan Ballad skill granting a defence and strength buff to the entire team at a moderately high but consistent enough SP cost, Aeleen can become a decent enabler of doublebuff prints or effects for her teams with additional skillshare defence buffs equipped.

With only one damage skill in her position, and passive abilities that either lean more towards her support utility or ad clearing content, Aeleen's damage output is on the lower end for wind adventurers when it comes to endgame content.

As her support skill is tied to a long SP cooldown via her Valhallan Ballad, Aeleen's support output typical pales in comparison to other wind adventurers whose main buffs can be easily outputted due to them being placed within the first skill slot, which has a relatively small SP cost.