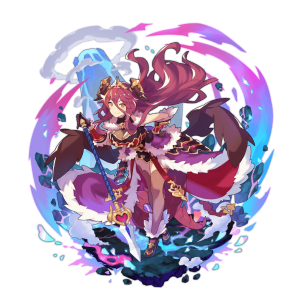 The Adventurer form of Brunhilda, Mym, arrives as the second Flame Gala Adventurer, wielding a Lance and fire breath. More than any other Adventurer so far, Mym is all about Shapeshifting and capitalizing on Dragon damage. All in all, Mym is incredibly potent, and looks to be well placed to be viable both in Flame and Wind content.

Note that no matter what dragon she has equipped, Mym will visually Shapeshift into Brunhilda her first time and High Brunhilda from her second transformation onwards. Her stats will still be impacted by the Abilities of equipped dragons, but her attack combos are set.

With the release of Chain Co-Abilities, Mym has gained the Dragon Claws VI ability, which further augments both her own damage in Dragon Form and allows her to pass this benefit along to other Adventurers. When combined with Dragon Haste Co-Abilities, as well as potential Dragon Prep prints, this allows Mym to rapidly gain power with each Shapeshift.

Thanks to her synergistic kit, Mym will transform faster and spend more time in her dragon form than any other Adventurer, making her ideal for burst damage.

Even when not your controlled Adventurer, Mym brings the Dragon Claws VI ChainCo-ability, which increases Strength by 10%, then 20%, and last 35%. If you stack this with a wyrmprint like The Red Impulse, this further adds to Mym's ability allow for huge gains in strength the longer a fight goes.

If Mym is ever in a situation where she cannot get the most out of her Shapeshifts-- whether due to Dragon Delay or the need for specific timing-- her power drops off sharply as she has little to recommend her outside of her dragon state. This also means she's pretty terrible in the hands of the AI.

While the Burn resistance is thematically appropriate, it’s primarily a resistance for Water Adventurers. Mym will struggle a little compared to powerful Water Lances like Fjorm or Elisanne, as she lacks their elemental advantage over Flame foes.

Gungnir: It should come as no surprise that the Agito Lance is one of the best options for Mym, roughly tied with the Pureflame Lance (though Gungnir is typically slightly better). It's high stats and healing or damage passive make it incredible in all content, though acquiring it is a challenge to say the least.

Pureflame Lance: Made from Mym's own body parts, the Pureflame Lance is definitely a top pick for Mym. It's active skill can sometimes make it better than Gungnir, though it's typically just ever so slightly worse.

Chimeratech Weapons: The Chimeratech weapons, with the Lancermaster being the obvious better choice, are the essential stepping off point for Mym into harder content.

The two most important prints for Mym are The Red Impulse and An Ancient Oath offering both Dragon Claws and Dragon Skill, perfect for Mym's shapeshifting focused kit. Dragon and Tamer is another best-in-slot pick for Mym, capping her skill damage nicely.

After that, Dueling Dancers is great for a 4* print as it has a Dragon Affinity which is very useful.

Such High Spirits and Entwined Flames also have Dragon affinity, but Sisters of the Anvil is great if expecting Doublebuffs.

Set 2 is a Skill Prep build designed for fast shapeshifts to rush down faster bosses like High Midgardsormr.