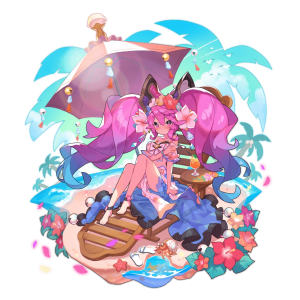 Summer Cleo blows in with the tropical wind, effortlessly knocking aside the four previous Light Bow adventurers. Where Summer Mikoto is purely damage oriented, Cleo is comparable to Gala Sarisse, a supportive Bow wielder whose primary Skill is enhanced by the number of user buffs. Tropical Breeze provides a whopping four buffs on its own, and high Skill Haste ensures that Parasol Shot is firing the maximum number of shots at all times.

The addition of new mana spirals further rewards good positioning with Parasol Shot doublecasts alongside substantial number boosts all around. Coveted for her shared skill, Tropical Breeze is a must-have for speed clears of any kind, such as Time Attack or Karina doublebuff shenanigans.

In line with her Co-Ability, Cleo has multiple ways of increasing her Skill uptime, leading to more frequent Paralysis applications and team support.

Cleo rounds out the Light roster as a capable Bow adventurer who maintains full Skill usage during all Zodiark-related content.

Although well-suited for bosses with low Paralysis Res, Cleo's Paralysis-heavy kit will struggle during longer endgame level fights such as the later levels of Mercurial Gauntlet or Master High Zodiark's Trial.

Only Buffs Nearby Allies

Heinwald players will relate; Cleo usually isn’t up near her melee allies, and rolling in to do so may sacrifice combo stacks and place her at risk. In practice, Cleo’s ranged teammates may be the only beneficiaries of her support buffs.

Gala Reborn Jeanne is the top pick for pure damage.