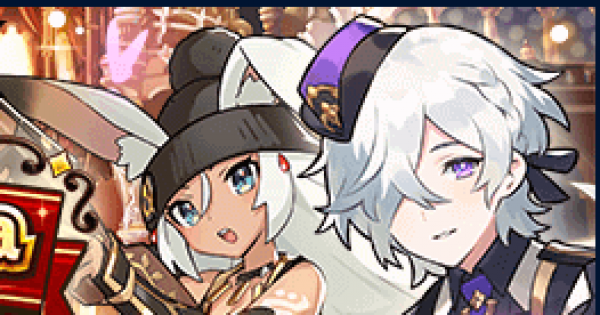 Welcome one and all to another Should You Summon article, and piece of writing that provides you a second opinion as to whether you should try to get the new units or not. And like usual, the end of the month brings with it another Gala banner. With the recent release of the Legend Ayaha and Otaha fight, two new water units have made their way into the game to ease the difficulty that players may be facing right now. With the release of Chapter 19 Part Two of the main campaign, Mascula has finally joined the adventurer roster as a Gala unit. Meanwhile, Sarisse fans have finally been given another alt to hopefully use in endgame content. Like usual, these Gala banners have a boosted 5-star rate of 6%, so it is always a good time to either restock on eldwater from duplicates or try your luck on summoning some permanent units you have missed out on previously.

The Android that fights for Peace

Mascula finally has his body restored. I wonder what technology and fairy magic they used in order for him to pilot it? It certainly seems quite cool.

Onto the most exciting character of the two, Gala Mascula enters the game as probably the first water blade to be a potent force within this element meta. Let’s start with his main gimmick tied to his Skill 2 Code 36: Coolant Cycle at a cost of 5570 SP. This skill grants him the ‘Master Control’ effect for 26 seconds, which provides benefits to him under his first ability Accelerator Unit. While he has the Master Control effect, it proves Mascula with the benefits of:

This ability also further provides the generation of a strength amp whenever he utilises his skill 1, with a cooldown of 20 seconds. Like other gala adventurers who have recently received mana spirals, Gala Mascula comes with the benefit of having the ability to attain a maximum team strength amp level of 3. To top it all off, the skill fills his second skill by 50% when he loses his Master Control effect, allowing him to maintain respectable uptime on it. Do note that Master Control is lost whenever he shapeshifts.

Like that of Gala Laxi, whenever he has the Master Control buff his skills are also upgraded to provide additional benefits from his unpowered state. His Skill 1 Code 03: Rise Generator (SP cost of 3840), which normally provides knockback immunity and a one-use shield nullifying damage less than 30% of their HP, this skill transforms into Code 08: Execution, which provides the standard effects plus the Amplified Current buff for 11 seconds. During this buff window, his standard effects are further empowered and hit more times per attack. His skill 2 meanwhile transforms into Code 06: Conclusion, which not only has its SP cost reduced to 2830, but deals 6 hits of 489% damage, and can dispel one buff from the enemy.

To finish off this excellent well-rounded kit, he further comes with the Critical Frenzy ability that Gala Laxi possesses, in which his critical rate is increased by 4% up to three times per 15 hit combo, and 4% to the critical damage modifier up to ten times per critical hit (which has a 1 second cooldown). To help with his buff uptime, he also comes with the Combo = Buff Skill Time chain co-ability, which increases the duration of their buffs by 15% when the hit counter is 10 or above.

Overall, its clear that Mascula has everything you want an adventurer. Boasting excellent damage, dispel utility, high hit count ability and a decent strength amp support system, Gala Mascula can just about tackle all future water content that will probably into the game. Just like how Gala Notte was built to handle Legend Ciella excellently, Gala Mascula also has been designed as an extremely viable option due to his playstyle directly countering the Legend Twins mechanics. He is able to remove the buffs that prevent afflictions from occurring during Berserk, can remove the hit counter clones that spawn during the fight within a quick timeframe, and can possess a strong skill share option with his personal buffs. Even within a Curse of Nihility environment such as the Lilith Sinister Dominion fight, Gala Mascula’s Master Control and Amplified Current effects are both immune to this debuff, ensuring he can also dish out the damage. As such, I strongly recommend pulling for Gala Mascula due to his excellent viability within the water content endgame.

Recommended Builds: Due to water having excellent availability to dragon haste boosting effects, Gala Mascula can run a co-ability setup of Summer Celliera, Tiki and Yurius. Not only do these adventurers provides additional dragon haste boosts, but each possess ability which also improve his damage output including Dragon Claws, standard attack, and skill damage. Within a Curse of Nihility environment, switch out Summer Celliera’s nullified Dragon Claws chain co-ability for a critical rate co-ability. Preferably pick Renee if you have the option, as her chain co-ability also boosts the duration of buff effects. If you do not possess some of these co-abilities in particular, you can do a generic setup of critical rate, skill damage and combo = strength +% chain co-ability to improve his non-dragon damage output.

For wymrprints, Gala Mascula’s ability to generate hit counter quickly makes him a perfect choice for flurry strength or devastation effects. If you are in a team with a frostbite enabler, it also recommended to use the His Clever Brother wyrmprint to boost your damage output to frostbitten enemies by 20%. If you are running a dragon-centric build, the An Ancient Oath wyrmprint can also grant him additional stacks of strength via the Dragon Claws effect each time he shapeshifts. Unfortunately, due to blade units still not having a specific weapon skill damage print, the best amount you will be able to reach without wasting additional slots is a generic 5-star 30% skill damage print. Finally, due to his innate high critical rate nature, Gala Mascula can easily run prints that boost his critical damage.

If you are within a doublebuff heavy team, you can also choose the following prints below to further boost your buff capabilities, especially if you are running Xander or Karina skill shares, whose damage scales based on the amount of buffs the user has. The Felyne Hospitality print is excellent for him to use considering his solid base critical rate.

Wow, that's a cool lookin' outfit that Sarisse has there. And a manacaster to boot? Looks like this girl is ready to tackle any problem in the future.

While much praise can be given to the excellent kit of Gala Mascula, the same cannot be said for Sharpshooter Sarisse, who is the first permanent close-range water manacaster in the game. As we have seen in the past, close range manacaster typically have low skill damage but provide utility to buff the damage output of their auto attacks to succeed in combat. Excellent examples are units like Saiga and Yoshitsune, who buff their auto stacks via specific effects or attack rates to get the most out of their weapon and be somewhat competitive within their element.

Unfortunately for Sharpshooter Sarisse, she does not possess the greatest means of meeting these objectives. Starting with her Skill 1 Progress Blaster, it deals 25 hits of 32% at a not so impressive SP cost of 4215 and can inflict frostbite. It also has the added effect of filling her Skill 2 gauge by 25% if it hits enemies 25 or more times during the skill. Against a single target, it must land all hits to successfully proc this condition. However, as the skill animation is not too long this should not pose players much of a challenge. Her Skill 2 Sylvan Aim then deal 1 hit of 330% and 4 hits of 149% at a SP cost of 6520, and provides one of three benefits:

As you can see from that description, she only has a 1 in 3 chance of debuffing the defence of the enemy, which provides benefits to her standard attack. While the two other choices have some nice utility, it does nothing to help her damage output. Her abilities sadly don’t add much value to her, possessing the Debuff Skill Time passive, which increases the duration of bleed and debuffs by 20%, and the Last Recovery passive, which grants her a HP regen when it is reduced to 30% or below. However, she does possess a respectable chain co-ability in the form of Combo = Energy Level Up, in which she is granted one energy level per 20 hit combo, something that is easily accomplished for close-range manacaster.

Sadly, this kit resembles a lot of what Sylas had pre-spiral, in which its rng nature through its second skill and overall low damage mods meant that he was irrelevant in wind content for a while. However, unlike Sylas who had some useful buffing utility via his skill 2 skill haste, Sharpshooter Sarisse possesses extraordinarily little supportive nature, while boasting offences that do not compete with those at the top of the water game. If you do want an excellent close-range manacaster its best to go with Yoshitsune, whose attack rate buffs and dodge kit pairs well with the large quantity of dodgeable attacks present in Legend Ayaha and Otoha. In a Curse of Nihility environment Sharpshooter Sarisse is a bit more competitive here as close range manacasters standard attack damage allows for great SP generation, which allows them to up their damage via skill shares more so that other weapon types. However, within the water element there are better frostbite enablers for damage output, and while her debuffing nature is nice, it is not good enough to solidify her as a solid support option within this content. As such, I do not recommend summoning for her due to her mediocre damage output.

Recommended Builds: For co-abilities, you can do the same dragon-centric setup mentioned previously for Gala Mascula, where you have equipped Summer Celliera, Tiki and Yurius in the party. Outside of these three, a setup of strength, standard attack, and skill damage co-abilities will serve you well in improving her damage output. In the absence of standard attack, critical rate is also a solid option.

For wyrmprints, those which worked for Gala Mascula’s setup will also serve you well with Sharpshooter Sarisse. In place of the generic 30% skill damage print, manacasters can utilise the Rivalry of Kings print to maximise their skill damage output with a 40% instead. Within the Curse of Nihility environment, the close-range manacaster capability of generating SP relatively quickly allows them to specialise around dragon damage, so prints which give you an edge to your damage whilst in dragon form will be key.

On Summoning Rates and Wyrmsigils

Gala Mascula is an excellent addition to the water roster on his own that he alone is worth summoning for. While Sharpshooter Sarisse is fairly mediocre when it comes to water damage, Gala Mascula’s utility will allow him not only tackle current endgame content for water, but future Rise of the Sinister Dominion fights with water as well.