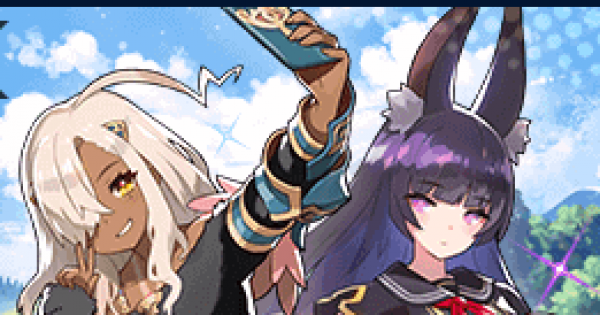 Say cheese! It's time to show a united front, and say hi to Nadine and Linnea!

Ok, like, I know this is suppose to be the Summon Showcase, but seriously, Nadine is a terrible event planner. My parties are way more interesting than this. We're just doing the same map like a billion times! Ugh.

It’s appropriate that Nadine is obsessed with Selfies, as she’s got a pretty good selfish energy based DPS kit. She can Dispel with her S1, and the buffs she can give herself with her S2 are pretty good. Getting and Energized Strength buff is great as well. All around, she’s solid, and can perform well.

Doesn’t matter though. She’s not worth pulling for. Sure, for selfish DPS, she’s top 3 for flame, but that’s irrelevant. The fact is, she’s not good enough to compete with Marth or Ezelith for the DPS of choice slot for current content. She’s only marginally better than Euden, and he’s free. You’re far better off just using him, as he can easily clear Master Volk even if he’s not in vogue. Plus, in the real world, she’s not as good as Ezelith, who has been around forever. At this point, it would be foolish to invest a large amount of wyrmite to get her when a free option is nearly as good and other picks are frankly just better.

Verdict: No. While Nadine is good, she’s not good enough to be worth investing in.

I mean really, you're supposed to switch things up a bit! I know I gave Euden a hard time about being the Party Prince, but if war is this boring I say bring on the cake! Bleugh, almost makes me want to go back to grinding Agito maps.

If Nadine runs into the problem of only being marginally better than a free Adventurer, Linnea runs into the problem that Shadow is built like a brick outhouse: it’s totally stacked. She falls somewhere between Curran, who hasn’t ever been relevant, and Vice, who is a 3★ and far easier to get. That’s too bad, because her Force Strike based playstyle at least looks interesting. But in Shadow, interesting just doesn’t cut it.

Just use Vice or Patia if you don’t have a Shadow Adventurer to speak of. And if you have one of the powerhouses like Gleo, Galex, or even Bellina, you just don’t need Linnea at all.

Verdict: No. Decent doesn’t cut it in the Element of Our One True Queen.

Well at least Lowen is here to cheer me up. Too bad all he wants to do is try out Ciella again and again. Sheesh kid, get a hobby like Louise did.

Oh, and I'm sorry about your sister. Her spiral was...unfortunate. Could be worse, right? She could be Cassandra.

Honestly, Lowen is the only thing on this banner worth going for. Even before his spiral he was the best healer for Water content, and that just made him better. He’s by no means mandatory, but if you need a Wind healer for solo or raids, this is a good time to grab him.

Verdict: Yes. Don’t chase the 5★s. Lowen is a worthy prize on his own.

Oh, um, hey, Cerberus. Didn't know you were home. Sure you're not hiding Apollo or Sakuya in there? Maybe Shinobi? No? Ok, sorry to bother you.

Are you serious? Is this some sort of joke? Look, Cerberus was relevant about a year and a half ago. The only way this could be worse is if it were Agni or that one Primed Strength Dragon no one likes. I mean, forget Gala Mars, Apollo and Sakuya are way better dragons. It’s not worth investing in Cerberus at this point. If you don’t have any Flame dragons, save up and wait.

This is not a limited banner. All units are going into the permanent pool.

Final Verdict: No. This is a non-limited banner and it's super bad. Only summon if you need Lowen.

Be real nice if we got a banner I could get excited about that wasn't a limited one. Oh well. Gala at the end of the month probably, save for that, yada yada. This is a bad one folks. Not as bad as the last Banner, but it's reaching for that.