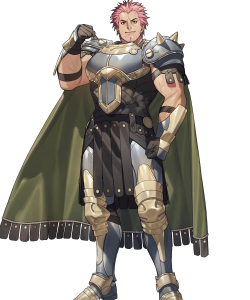 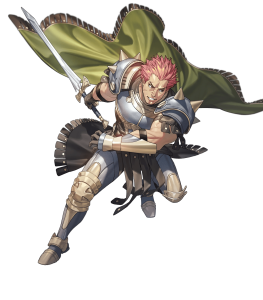 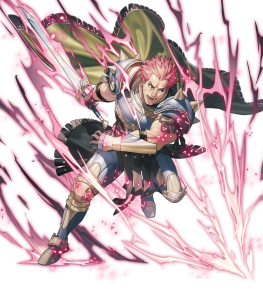 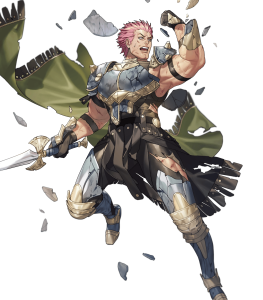 The legendary big brother himself debuts in Heroes with a weapon that is almost as simple as it is named. And honestly, not many specifics are needed to describe it: Warrior's Sword is a big ball of spectrum stats — and even more if you grant stat bonuses to him — with a handy helping of Guard.

Basically, Holst flexes those nice big stat muscles — possibly upwards of +20 Atk and +17 Spd/Def/Res swings under optimal conditions (assuming Tactics) —  while dominating his foe further by denying their Specials from charging (assuming they don't have specialized countermeasures to that). All in all, a solidly nice deal for staying above 25% HP.

Holst is basically designed to be your next updated 2022+ Colisseum red core unit, reaching the high 190 scoring bin while also having a unique (thus, high SP) weapon to himself and benefitting from a peachy stat distribution all-around. With 43 Atk, 41 Spd with a superasset value, some solid overall defenses to go with those, and a weapon that easily supplements additional stat needs, Holst is quite often an "absolute unit".

As an additional benefit of his infantry status, Holst also gets a fair share of numerous infantry goodies, especially B passive skills such as Null Follow-Up, Bulwarks, and Dodge skills, and miscelleanously helpful options such as Vital Astra and Breaths.

Considered yet another winner in Book VI's oddly fantastic line of great free units, Holst is a nice investment worth taking. Investing in Holst fortunately won't directly involve Orbs, as copies of him are made freely available through his Grand Hero Battle and then the Heroic Grails shop. After merges are accounted for, skill inheritance is another concern that's also mostly easily handled through a variety of free premium choices in Compile Manuals.

In a class as oversaturated as sword infantry swords in Heroes — and perhaps sword units in general — it is quite important for a unit to have characteristics that set themselves apart from the rest of the crimson brood. Holst…unfortunately doesn't spare much of that between a standardly great statline that is expected of fast infantry nowadays, as well as a simple (but still pretty good, mind you) weapon that only largely gives him just stats and Guard. A lack of permanent CD-1 effects also doesn't help, leaving him with relatively unexciting Special proccing options.

With Rearmed Líf coming along in the same update and basically upgrading literally every generic sword in the game performance-wise, investing in Holst may at the end of the day become a personal flavor choice among many others in similar roles.

Bonus negation or reversion — commonly in the form of Lull skills, Wily Fighter, Panic, and other specialty measures — will not totally stop Holst from being functional, but it does cut off two good main sources of his power: the visible bonuses empowering him, and the extra stats Warrior's Sword grants by "doubling" said buffs.

If Holst is careless, he may also be weakened to a point where he's below his Sword's working ≥ 25% HP condition, making him a significantly more manageable unit to beat due to vanished stats and effects. Needless to say, otherwise good albeit recoil-inducing A-slot skills like Atk/Spd Push and Fury are unwelcome on him.

Holst's 26 Res is actually pretty alright all things considered — with weapon buffs and a casual +6 Res bonus, it goes up to a more resilient 43 at worst. Regardless, it's somewhat of a weak point with the amount of strong, modern-day magical enemies ready to cannibalize it without further atypical investment.