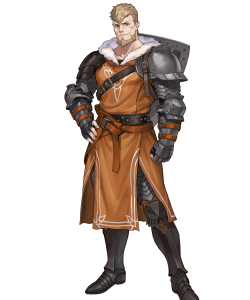 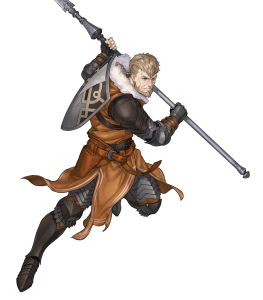 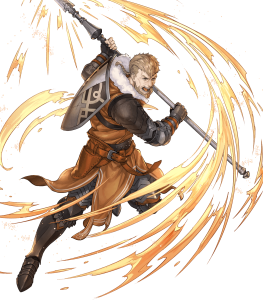 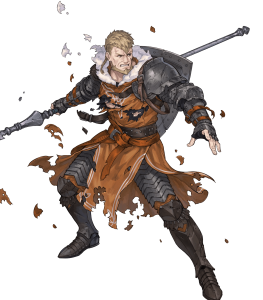 For a weapon on a free unit, Jeralt's namesake Lance is a surprisingly simple but powerful bundle of support and horsepower.

Crudely speaking, this weapon makes Jeralt  "Duessel / Legendary Ephraim / Fallen Berkut at home" ... and that is honestly and extemely fine and speaks positive volumes for a free unit!

Along with Brave Chrom, Jeralt is the first of the seventh generation melee cavalry class. He thus relishes in an updated standard average stat total of ~180, which is honestly pretty difficult to mess up. Firstly, having top-of-the-line physical stats of 43 Atk and 39 Def — both of which also get +4 instead of +3 upon using Trait Fruit and/or Ascended Florets — allow Jeralt to confidently take on the best of physical threats when supported by the potent effects of Breaker Lance. Next, a respectable base 30 Res gives quite a fair amount of leeway in enduring the occasional magical spat. It is at a coincidentally similar value on par with Duessel and Fallen Berkut, both of which are exemplary in their ability to take magic all day with appropriate investment. Again, Breaker Lance plays a role here as its double Atk penalties are quite universally awesome for tanking anything.

Finally, 26 Spd might not seem like anything special. However, because of the widespreadness of follow-up denial effects, especially on new units with minimized Spd values, Jeralt often finds himself in a great position where he can break past said effects and force a natural Spd match in which he will often win thanks to Breaker Lance forcing this interaction.

Cavalry units have been increasingly valued with high respect to their high movement and threat range compared to other units. Jeralt is no exception to this especially with his excellent combat prowess thanks to Breaker Lance. On typical builds, he leverages this fact further with access to Near Trace skills for post-combat movement flexibility. Else, he will typically be satisfied with other tools available to his class, including the appropriate Lull and Flow skills.

Though relying on cavalry-specific buffs are a bit dated, they are also very available at low rarity and allow Jeralt to become exceedingly bulkier and stronger with low investment. As a quick and particular recommendation, Ward Cavalry stacking (or other similar skills for the sake of variety) is something that is very powerful with all-around tanks like Jeralt.

Jeralt's awfully astounding unit strength is compounded further by the fact that copies of him can be acquired for free as a Grand Hero. Even after merges are accounted for, users only need to worry about inheriting some fairly high-quality skills for him, many of which are also easily and freely available through Compile Manuals. After everything's said and done, Jeralt rewards super investment by being a worthwhile high-scoring choice for Colisseum modes and simply a safe-to-use, awesome combat/support unit all-around.

As with Zeke, Fallen Berkut, and Duessel before him, Jeralt inadvertently subscribes to a few weaknesses of their trade. The ever increasingly common Null Follow-Up effect, built into weapons or enemy B-slots is a particular concern above all else, and we'll be seeing a lot of those from here on out. As a result, without the help of Breaker Lance's automatic follow-up, his combat may diminish with his otherwise rather average Spd and vulnerability to natural follow-ups, though he should exit out of most matches fine with his generally great combat stats intact.

Jeralt's base 30 Res is pretty fair but also an easy-to-exploit weak spot in the face of increasingly powerful magic and dragon breaths.

Even with dedicated Res investment — which has pretty great returns most of the time, mind you — Jeralt may be hesitant to put himself in front of high-pressure hits from the likes of Winter Lysithea or Ninja Corrin without access to special damage reductive skills, too.

Breaker Lance automatically applies【Panic】and Atk/Def penalties to certain enemies at the start of the match. While helpful most of the time, this might come back to bite the donkey's butt if the affected unit(s) happen to have some form of penalty neutralization or reversal. Unity skills are particularly optimal for many units and deserve special caution.

Breaker Lance's in-combat Atk/Def swings and, most importantly, guaranteed follow-up assume Jeralt responsibly keeps himself above 25% HP. For units expected to weather many hits like the Blade Breaker, this can be a frighteningly common scenario without some form of sustain.

Fire Emblem Heroes is a game that has added an insane number of added characters in half a decade. Naturally, a bit of overlap with other competitors is expected, especially in the particularly crowded lance cavalry category. Despite this, Jeralt's Grand Hero status and huge overlap with similar units like Zeke, Duessel, and Fallen Berkut make him an overall solid free choice for a cavalry tank all things considered.

Jeralt is a bit more pressured in the pure offense department, in which recent entries like Brave Chrom, Brave Eirika, Sain, and Ingrid have naturally high Speed and creative combat characteristics (Null Follow-Up, extendable movement, and counterattack cancellation, all variably) that make them fair competitors for a slot as well.