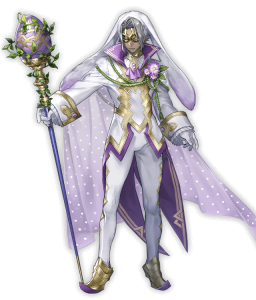 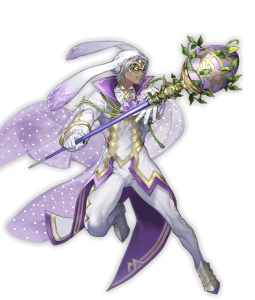 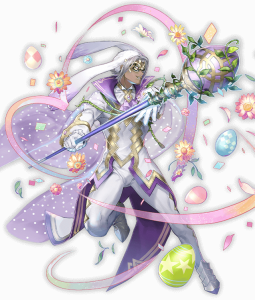 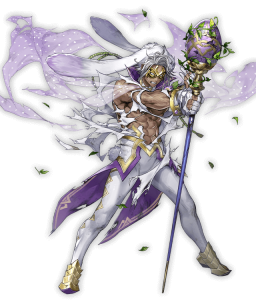 You are insufficiently festive! (Offensive Support)

This is a typical offensive support build for healers that takes advantage of their ability to simultaneously utilize Dazzling and Wrathful Staff to both keep them safe while attacking as well as increase their damage output. As a cavalry healer, Spring Bruno excels with this set due to his superior mobility.

Spring Bruno has a variety of weapons he can choose from: Pain will allow him to devastate enemy teams with heavy chip damage, particularly if he combines it with Savage Blow as both his C skill and Sacred Seal. Alternatively, Gravity provides a powerful mobility debuff that synergizes well with the high mobility of cavalry units to emphasize their advantage. Recover is generally a bit better for Spring Bruno due to the stronger healing output as well as this build’s ability to prevent counterattacks, but his base Martyr will also work just fine as well.

Atk/Spd Solo is easily Spring Bruno’s best choice of A skill, due to providing a strong amount of offensive stats with a very easy to meet condition; as a cavalry unit, he can easily maneuver to avoid being adjacent to his allies when attacking. Alternatively, Atk/Spd Bond can also work although its condition is a bit harder to meet for a ranged cavalry unit. However, it can stack beautifully with the Atk/Spd Bond Sacred Seal, giving Spring Bruno a massive +10 boost to his Attack and Speed when attacking. On a budget, his base Atk/Def Push will work just fine; it’s best paired with the Live to Serve Seal so that he can easily heal himself back up to 100% HP to reactivate it.

This set aims to take advantage of Spring Bruno’s impressive Defense. Combining the Absorb staff with Close Counter allows him to constantly heal himself after every attack, substantially improving his tankiness. Team support is very important for this build to function, as Spring Bruno’s stats aren’t high enough for this to consistently work otherwise.

The main choice to make for this build is Spring Bruno’s B skill. Guard works great for any tank setup as it prevents him from being overwhelmed by enemy Specials. Alternatively, Vantage can allow Spring Bruno an extra chance to heal some more with Absorb, which can potentially keep him alive in subsequent combats. Finally, Spring Bruno’s base Dazzling Staff can work well to give him some Player Phase potential as well.

The Quick Riposte Seal is important to ensure that Spring Bruno can double his opponents, maximizing both his damage output as well as his self-healing with Absorb. However, Close Def is a possible alternative with team support, as it’s possible to stack his Defense high enough that he can simply ignore most physical damage.

This is an alternative set that aims to maximize Spring Bruno’s physical bulk. It relies heavily on the power of Witchy Wand to completely shut down enemy Specials; by doing so, Spring Bruno can essentially make himself nearly undefeatable by physical damage dealers. However, his damage output will be a bit lacking, and it will likely take multiple combats or help from his team to defeat his opponents. This build functions best with team support since while Spring Bruno will be strong against physical damage dealers, he’s completely helpless against magical damage.

Close Counter is important to allow Spring Bruno to have damage output on Enemy Phase against melee threats, but it can be replaced for Steady Stance for even more physical bulk. Steady Stance 4 is ideal since it gives the most Defense, but the Special charge reduction doesn’t do much when using Witchy Wand. Steady Stance 3 is perfectly fine for budget purposes.

The Brazen Atk/Def Seal helps maximize Spring Bruno’s survivability; while it’s not active while he’s at 100% HP, it prevents him from being worn down from multiple combats. Alternatively, the Atk/Def Bond Seal can potentially always be active with proper positioning, though this can be a bit tricky since Spring Bruno often needs to move ahead of his team to properly apply Witchy Wand’s debuff.

As yet another unit in the “seasonal before normal version in Fire Emblem Heroes” club, Spring Bruno is one of the few to ignore typical stat spreads. Featuring decent Attack and good Defense, Spring Bruno is pretty well suited toward a defensive tank setup. He also has the benefit of being a cavalry healer, allowing him to offer a lot of utility to a team due to both the typical utility of a healer as well as his strong mobility.

While Spring Bruno’s niche is abundantly clear just from looking at his stats, there are some clear issues. His Resistance is very poor, and any magic damage dealers that manage to attack him will likely have no trouble taking him out. His Speed is also subpar, making it difficult to take advantage of what is arguably one of the strongest abilities that healers have, their ability to run Wrathful/Dazzling Staff combo. Fortunately, he can get +4 instead of +3 to Speed with an Asset, which can help him enough when combined with a strong A skill and cavalry buffs.

Spring Bruno’s Defense is his most notable strength, as it allows him to function quite well as a physical tank.

As a healer, Spring Bruno can utilize the potent Dazzling/Wrathful Staff combo to simultaneously deal strong magic damage (while preventing counterattacks) as well as apply strong debuffs, though his effectiveness at this isn’t quite as high as some of the other cavalry healers due to his offensive stats not being as good.

As a cavalry unit, Spring Bruno has superior mobility as well as access to strong cavalry buffs.

As a cavalry unit, Spring bruno will have issues dealing with anti-cavalry weapons like Ridersbane. This can make it difficult in his role as a physical tank, though the frequency of enemies with Ridersbane varies widely based on game mode.

As a limited seasonal unit, Spring Bruno is difficult to obtain multiple copies of for merging or for obtaining optimal IVs.