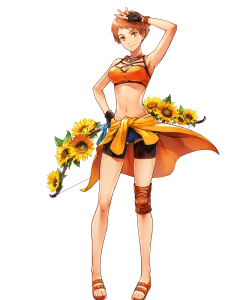 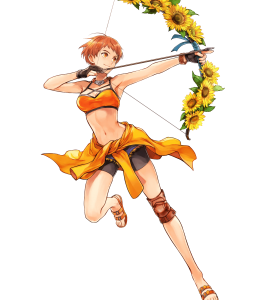 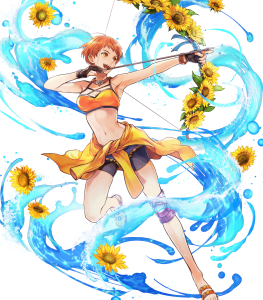 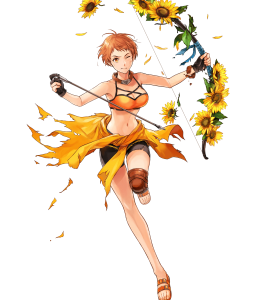 Leonie’s base 36 Atk is great for a free bow cavalry and allows her to deal solid damage to many units.

Leonie’s base 39 Spd is quite high and allows her to double many units while avoiding being doubled in return.

Leonie’s base 41 HP and 27 Def are decent and allow her to take at least a hit from many units, especially when enhanced with extra Def from skills like Sunflower Bow+.

Leonie’s status as a bow-wielding cavalry allows her amazing movement and threat range, with a wide variety of great inheritable bows to use.

Leonie’s base 19 Res is terrible and means that magic units deal high damage to her, potentially KOing her in one hit in some cases.

Cavalry-Effective Weapons like Ridersbane+ deal bonus damage to Leonie, threatening to KO her in one hit if wielded by a particularly strong unit. Cavalry-effective tomes like Thani are particularly dangerous due to Leonie’s terrible Res.

Leonie’s defense is already high, and with her superboon being defense she can easily use any defense special available to her. An attack boon is just as good, giving her a higher chance of a OHKO. With close foil, she can defend against melee units. Since her resistance is already bad, she should avoid being attacked by any kind of magic unit, but she does stand a chance of getting hit at least once by a mage if their attack is low enough. Once supermerged, Leonie will be a high defense tank and will be capable of withstanding any melee attacks while also dishing out damage.

Lull atk/spd makes any damage she does take lower while also raising the chance she won’t be attacked twice. With her already high speed stat, she most likely won’t be attacked twice, but it’s good to rebuff anyone who could have a higher stat. Rouse atk/def can be switched for bond skills, but if she’s blocking melee units from attacking your other units, it’s best if she has solo skills. The same can be said about the S skills. Any S with a defense boost is ideal so her special does more damage.

All in all, boost her defense so she survives melee attacks and can dish the damage back out to anyone who dares attack Jeralt’s #1 apprentice!

Opinions on Tatiana
Looking for ideas on what to do with Tatiana. Rolling on this last banner got me…
+10 Shinon :feh_shinonpout: - "A single arrow, right between the eyes? Who else could make a shot like that? No one, that's who!"
After a long and perilous journey, I’ve found my first +10 5-star exclusive. It’s the…
Thigh gap. I mean Nyx
Pulled a few Nyx’s and I see a lot of life and death builds but I feel that’s…
How to get higher on aether raids
Hi guys. I was playing this morning my aether raid assault and I won… 320 meters or…
I think I.S wants me to +10 L! Lyn 😅
Free summons another Lyn Screenshot_2021-07-22-08-03-51-787_com.nintendo.zaba1080…
Read More