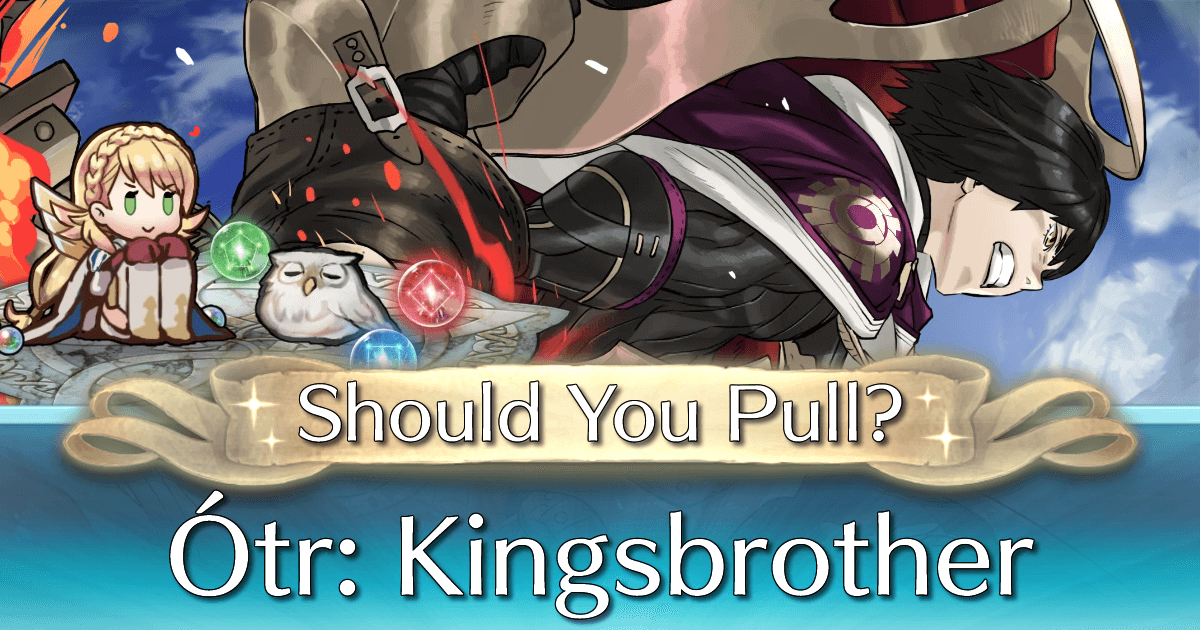 To the surprise of no one, the Kingsbrother Otr makes his playable debut right as his story relevance ends. But is his banner a worthwhile investment? That’s exactly what we’ll take a look at on this edition of Should You Pull.

Otr is reasonably competent as an Aether Raids Defense unit thanks to his fantastic bulk, which is only further augmented by his exclusive weapon, which inflicts a hefty -6 Attack penalty to foes in combat while buffing his own while also granting him automatic follow-up attacks. Otr also boasts access to a powerful exclusive Luna that essentially precharges itself, allowing him to have a devastating special fully charged from turn 1. Otr’s status as a cavalier is also a large boon for his application as an Aether Raids Defense unit, as he can consolidate all the usual benefits of cavalry units on Aether Raids Defense teams while also serving as the team’s mythic. However, Otr does suffer from somewhat stiff competition as a Defense mythic. Mirabilis in particular is an extremely strong option for a dancer that also provides mythic utility, making her an anima season staple. Seiros is also a strong option due to her fantastic durability and damage output, making her difficult for offense teams to deal with without the aid of Naga. As it stands, Otr is a reasonably strong option for a 7th slot mythic, but he’s not particularly outstanding when compared to Seiros in that role, although Otr is still one of the better Anima mythics overall.

Unfortunately, thanks to Otr’s status as a Mythic hero, his usage is in pvp modes is essentially locked to Aether Raids Defense unless one wishes to concur scoring penalties in Aether Raids Offense or Arena, due to Otr’s inability to be blessed. Even Otr’s naturally high Base stat total is unable to compensate for his inability to be blessed in Arena, which has strict scoring requirements that require blessable units if one wishes to retain tier 21. Otr is quite a strong player phase unit in pve content thanks to his high Attack and his exclusive weapon, but this isn’t something exclusive to him as many units can perform similarly well as player phase nukes in pve content, if not better.

Mythic/Legendary banners are always triple focus, which is a bit of a double edged sword. On the one hand, one can potentially gain significantly more 5* units than they would on any other banner, but on the other it could take a significantly higher amount of orbs to obtain a desired unit(And Naga help you if you want to +10 a unit locked to these banners). The overall value of each color is therefore incredibly important, as even one undesirable unit on a color can make pulling on that color risky, lest you should be stuck with 11 copies of a unit you have no interest in(even worse if said unit has very little to offer in terms of skill inheritance).

On Red, the focuses this time around are Valentian Palla, Legendary Eliwood, and Altina. Legendary Eliwood has some useful utility as a support unit in Aether Raids offense, but his use is somewhat limited due to his status as a Legendary hero and buffs being somewhat difficult to use due to the omnipresence of Panic Tower. Valentian Palla is a very strong sword flier, featuring a dual phase brave weapon with adaptive damage and Canto. Coupled with her already strong Attack, she can easily take out waves of foes on Enemy Phase with Vantage, Go for a Hit and Run Player Phase set, or go for a more traditional Enemy Phase focused set. Last on the list is Altina, who possesses a dual phase brave weapon with inbuilt Distant Counter, but she leaves much to be desired as a mythic when compared to her competition. In terms of skill inheritance, only Valentian Palla has anything worthwhile, as she possesses R Duel Flying 4 and Atk/Res Rein, which can be useful if you plan to use lower scoring Red fliers in arena or for magic based fliers respectively. On the other hand, both Eliwood and Altina lack any particularly noteworthy skills for units to inherit aside from Eliwood’s Death Blow 4, a skill that isn’t used terribly often these days.

Blue’s selection of units this time around is Zeke, Marianne, and Legendary Chrom. Zeke is one of the strongest lance cavaliers available, due to his excellent statline and good exclusive weapon that grants him Distant Counter and guaranteed follow-up attacks as long as his HP is above 25%. He also possesses decent skill inheritance in Atk/Def Catch and Lull Atk/Def. Marianne is a strong infantry blue tome thanks in part to her Icy Fimbulvetr, which inflicts a hefty -6 penalty to the foe’s Attack and Resistance during combat, and also grants her a guaranteed follow-up Attack and healing as long as she initiates within 3 spaces of a Flying or Cavalry ally, and she also has excellent skill inheritance in the form of Lull Atk/Res, B Duel Infantry 4, and Joint Drive Res. Lastly, Legendary Chrom is a very strong Blue Bow infamous for ruining Arena runs thanks to his exclusive assist, which is essentially Reposition and Dance slammed together into a skill. He also boasts extremely high Attack and an exclusive weapon that inflicts a hefty Attack and Defense penalty against the foe while negating his own penalties as long as his foe is at 100% HP at the start of combat. Legendary Chrom's skill inheritance is also quite good: Close Counter and Lull Atk/Def are both great skills for a wide array of units.

Green is the main color this time around, featuring the newly released Otr, Legendary Byleth, and Legendary Celica. Outside of his potential as a unit, Otr possesses very good skill inheritance in the form of G Duel Cavalry(Which he doesn’t need himself) Flow Refresh, and Atk/Def Menace. Legendary Byleth grants his allies Drive Null Follow-Up while also being very capable in combat himself, while also possessing fantastic skills to inherit: namely Lull Atk/Res, Atk/Def Ideal, and Time’s Pulse. Legendary Celica is the least appealing pull of the banner, being a fairly standard player phase nuke and only offering Swift Sparrow 3 and Atk/Spd Oath for skill inheritance, but she’s still a decent unit to use if desired.

Lastly, Colorless features Legendary Claude, Legendary Leif, and Shinon. Legendary Claude is an incredibly powerful Bow Flier thanks to his exclusive skills: Failnaught gives him access to Null Follow-Up, something all ranged fliers wished they could have. In addition, Fallen Star allows Claude to inflict Gravity after combat to the foe and all foes within 1 spaces of the target in addition to giving him 80% damage reduction against the foe’s next attack for one turn, and also reduces damage from the foe’s first attack by 80% as long as Claude initiates combat. Claude’s skill inheritance is also impressive, featuring Atk/Spd Catch and Spd/Def Rein. Legendary Leif is just as much of a threat as he’s always been, having access to Njörun's Zeal coupled with his high Attack and dual phase brave weapon means that Leif can perform well in both an offensive and defensive role, although his skill inheritance is somewhat underwhelming. Shinon’s Double Bow gives him access to inbuilt Close Counter as long as no allies are adjacent to him, freeing up his A slot. Aside from that, Shinon isn’t anything particularly special, but his skill inheritance is excellent. Atk/Def Solo 4, Time’s Pulse, and Deadeye are all good skills.

Green is the most worthwhile color on offer this time around. Legendary Byleth and Otr both have great skill inheritance while also being great units in their own right, moreso Legendary Byleth than Otr. Green is spoiled somewhat by the presence of Legendary Celica though, so if Swift Sparrow fodder doesn’t interest you, it may be better off to wait for Otr to rerun with more desirable focuses.

Red is the weakest color on display and shouldn’t really be pulled on unless one of the focuses is desired for merging or otherwise. The skill inheritance available is quite lackluster, so the main value from pulling on red is the units themselves. While Valentian Palla and Legendary Eliwood are both useful units, neither are terribly necessary, and Altina’s usually better off replaced with a different Astra mythic with the possible exception of Galeforce teams.

Blue is a decent enough color to pull on, but in the case of Marianne or Zeke, it may be better to simply wait for them to rerun on regular banners and pull for them there. Still, all three units are reasonably desirable and have good skill inheritance to boot.

Colorless is the second most worthwhile color, as all three of the units are strong in their own right. Legendary Claude and Shinon also have excellent skill inheritance, although Legendary Leif falters in this regard.

Unfortunately, this banner is extremely skippable. Aside from Green and Colorless, the selection of units is just ok, but not spectacular. Even if one wishes to pull for Otr, they may have to fight through several copies of Legendary Celica, which could leave Otr fans(If there are any) frustrated they were cheated out of orbs for Swift Sparrow 3 fodder. Colorless has a quite decent selection, and Blue is also alright for players looking to obtain or merge up Legendary Chrom. Aside from that, players would be better off saving orbs for a more desirable banner in the future with better focuses/more broken units than this one.