Kyurem and its Place in the Raid & Trainer Battle Metas

As of July 7th, Kyurem has taken over raids in Pokemon GO. Players may be quick to notice that this Legendary Dragon isn’t quite as powerful as Reshiram or Zekrom are. This lack of power however is met with a very easy raid boss to defeat for Rare Candy and, more importantly, Kyurem Candy. Kyurem shares Candy with the significantly more powerful Kyurem White and Kyurem Black, so you’ll want to make sure you stock up!

The article below covers details of the Kyurem raid, its best counters, duo tips, and its meta viability in raids and PvP. While we don’t have a confirmed date from Pokemon GO, it is expected that Kyurem will be the raid boss until July 28th.

Kyurem is a Dragon + Ice dual type Pokemon. The Ice sub-type makes Ice-type attack neutral to Kyurem rather than super effective; however, this also gives Kyurem a weakness to Fighting, Rock, and Steel-type attacks.

Kyurem carries the attacks Steel Wing, Dragon Breath, Dragon Claw, Draco Meteor, and Blizzard. These attacks make it difficult for Dragon-type Pokemon to survive long in this fight, so you may want to rely on your Steel, Fighting, and Rock-type attackers.

Kyurem can be tackled by 2 prepared trainers, regardless of weather. Most groups will want at least 4 trainers to keep it smooth. How easily Kyurem is subdued will come down to how many Meteor Mash Metagross and Aura Sphere Lucario you and your teammates have prepared. 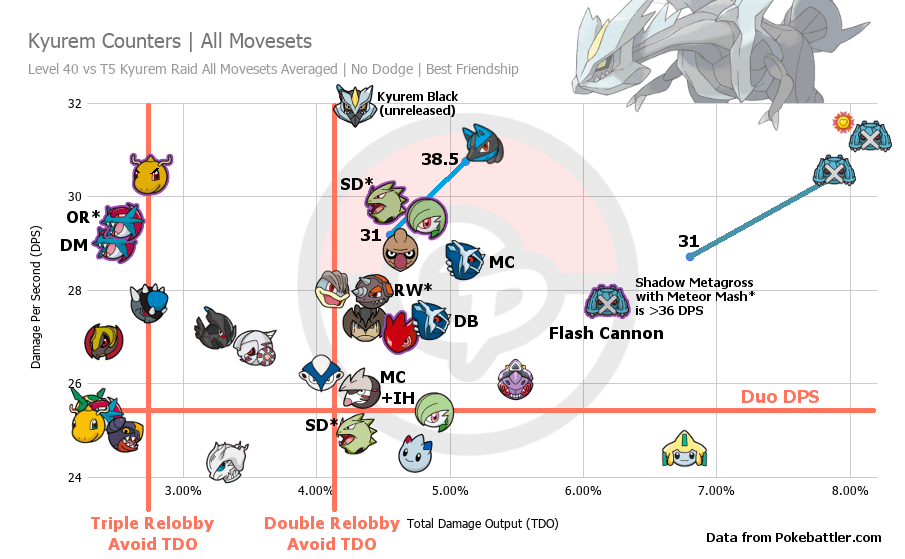 The best overall counters to the Kyurem raid are Shadow Metagross, Metagross, and Lucario.

While Shadow Metagross towers above the other two in power, it’s not as effective without the Community Day Charge Move Meteor Mash. Shadow Metagross still has a top tier performance even with Flash Cannon, but without Meteor Mash it’s far beneath normal Meteor Mash Metagross and Aura Sphere Lucario in power. Similarly, if your normal Metagross doesn’t have Meteor Mash, you may not want to bother with it, as the drop in power is that significant. Lucario, on the other hand, doesn’t have to worry about Community Day exclusive attacks and may even be boosted by the common cloudy weather. Special note: A level 40 Best Buddied Metagross will receive an extra damage boost in this raid as it hits a “level 41” Best Buddy Breakpoint. If you were wondering who to Best Buddy for the Premier Cup, the choice has been made.

These Pokemon are distinguished for their ability to assist in a duo attempt and for helping avoid relobbying a second time in a duo attempt. In short, sturdy, strong, reliable Pokemon. Normal Gardevoir is an honorary tank in this group as so long as you’re up against Dragon Claw or Draco Meteor. Two things to keep in mind with this group are that they can surpass Metagross and Lucario with a weather bonus, and that they are beneath level 31 Metagross and Lucario without a weather bonus.

Beyond these Pokemon, Hariyama, Zekrom, Palkia, and Rampardos are decent, but don’t offer anything over the others in terms of a duo attempt, let alone general damage.

As for the normal Dragons and Shadow Dragons that typically dominate Dragon-type raid bosses, the aggressive Dragon and Ice-type damage of Kyurem dampens their performance significantly. They’re not “bad” options, but their fragility will likely cause you to relobby even in larger raiding group sizes. With that in mind, going for more tanky options may serve you better in more casual raid attempts.

Kyurem in the Meta

In both Raids and PvP Kyurem isn’t good. With a 246 attack stat, Kyurem can’t even begin to compete with the majority of Dragon-type Pokemon in raids. Having Dragon Breath instead of Dragon Tail only seals its fate as a poor raid attacker. Dragon Breath usually means good things in PvP, but once again, having lower stats than most Dragon-types, other Dragon Breath users take the spotlight.

Kyurem had some hope in PvP a few months back. In the original Game Master, Kyurem had Icy Wind. Icy Wind is a coveted move in PvP as it deals decent damage while debuffing the enemy’s attack stat 100% of the time. Leading up to Kyurem’s raid month, the Game Master was changed and Icy Wind was removed. While Icy Wind didn’t exactly make Kyurem “overpowered” in PvP, it is thought that Pokemon GO removed the move to keep it from being too powerful. This is interesting lore wise, as now Kyurem is definitely a leftover husk of its former self.

Despite Kyurem having a trash performance, capturing it will give you Kyurem Candy. The significantly more powerful Kyurem White and Kyurem Black will also use this Candy. Given that these two Pokemon are expected to perform well in raids and PvP, it could be useful to stock up on Kyurem Candy now for later.

While Kyurem isn’t the most exciting raid boss in Pokemon GO, it will share Candy with the very exciting Kyurem White and Kyurem Black. Given that Kyurem will be easier to subdue than its alternate formes, it could be wise to stock up on Kyurem Candy now for later. With the conclusion of the Tao Trio in Pokemon GO, Kyurem White and Kyurem Black are that much closer to appearing in raids. It is clear that the summer of Pokemon GO has only just begun!