Mikoto has many unique strengths as a Blade User-- His passives increase Critical Rate, while Ravenous Fire and the Blade Co-Ability boost Strength. Topping off this perfect kit is Kindled Heart, a Skill that increases his attack speed for even quicker burst damage. 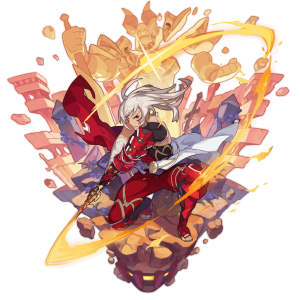 Mikoto: Nature’s Avatar made his debut alongside eight other 5★ Adventurers in the launch pool, and quickly became one of the most coveted pulls. He’s one of few in the roster with a means of increasing his own attack speed, and incredibly high Strength (second only to Ieyasu) paired with Critical Abilities only further enhance his massive power. Of course this comes at the cost of his ability to fulfill other roles, but as the attacker within a well-balanced team, he’s hard to beat.

Attack rate increases are among the best buffs in the game, and Kindled Heart now lasts 15 seconds, plenty of time to help Mikoto unload.

Mikoto sadly doesn't bring much to the table for his team, relying on others to grant him buffs and not providing any in return.

One with the Shadows

Generally speaking for Mikoto, you will want a Skill Damage print, a Burn Punisher print (assuming you are running in a Burn comp) and a Crit rate and crit damage print. Aside from that, Flurry Strength or Devastation and flat strength prints are good choices. There are a number of prints that fulfill this criteria, so look at your collection and figure out other options if you don't have the prints suggested.