Should You Summon: Fractured Futures 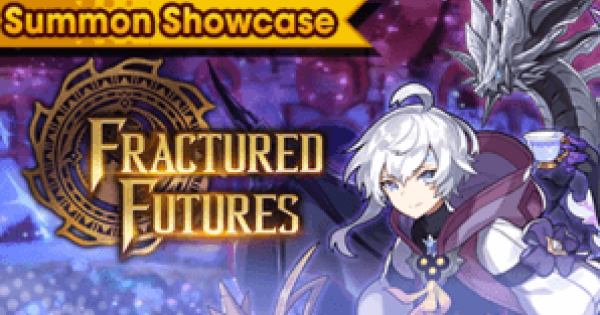 Wow, this anniversary is super fun guys! I gained like three sizes from eating cake, everyone got together for a big party, and Euden got spiffy new duds! I can’t wait to see what’s next for us! Oh hey, new adventurers! I’m sure they’re all great fun! Looks like they’re all seers and prophets like Verica! Oh man, I love getting my palm read!

Hey Delphi! Quick, tell me what you see in my future! I’m sure it’s fun!

HOLY GUACAMOLE! EUDEN DOES WHAT?!?!

With the rework of the way afflictions work, Delphi seems to be offering Shadow teams a chance to exploit Poison mechanics along with a valuable defense down buff. The catch is, he’s got the fill over time skill gages, meaning that his skills fill slowly. Of course, this is easily exploitable using a print like Sisters’ Day Out to allow you to quickly fill the skill gage to get a fast Poison and defense down on the enemy, though on a limited basis.

The problem then lies in the fact that currently, the best (and currently only) Poison Punisher mechanics are found not in Shadow, but Wind, with Pazuzu. That means Delphi really can’t take maximum advantage of his own mechanics at this time. Still, the Poison itself is strong and the Defense Down zone is very useful, especially in Raids where larger teams can all take advantage, or Mercurial Gauntlet with a completely stationary boss.

Mercurial Gauntlet is currently where Delphi has his home, where he shines as a needed debuffer and support. Right now he's strong, but has the potential to grow. This is similar to what happened to Rena when the new Burn Punisher dragon and mechanics propelled her from middle of the pack to competing with Mikoto as the best blade pick for Fire teams. However, I am extremely hesitant to recommend you spend wyrmite based on the potential an Adventurer has instead of what the current reality is. As it is now, Delphi isn’t as individually powerful as Natalie, or of course limited titans like Ieyasu or G!Cleo. He’s even below Botan or Veronica in DPS potential. Of course, most of those are limited Adventurers you could easily have missed, which means only Natalie outperforms in the permanent pool.

As it stands, Delphi is a good support, but has the potential to be an all-star with the release of Poison Punisher mechanics in Shadow.

Verdict: Yes. Delphi is strong now and has the potential to grow.

Ok, that was like, a super downer. I’m going to get a second opinion from Cassandra.
…
I...I think I need to sit down now, guys. Oh man. That image is going to be stuck in my head forever.

Cassandra is another Adventurer that hints of things to come, but unlike Delphi in current content she doesn’t have much going for her. Her S1 makes your team incredibly tanky with a stacking 5% HP boost and in longer fights could be a powerful recovery option for teams. As it stands now, however, there isn’t any content (outside of Omega raids) where that looks to be something that is truly needed. Her S2 is another Mirror skill to reflect damage, which does decently in HJP in the initial blast, but then rapidly falls off.

However, we know that things are about to drastically change. Omega Nyx is a clear clue that teams are going to need both damage and survivability in the content to come, and the days of four G!Cleo’s nuking down the games hardest Light boss in seconds are not here for long. Advanced Dragon trials and the new bosses coming in the months ahead seem like they are sure to demand an increased level of tankiness and survivability, which Cassandra is poised to provide.

Again though, I am loath to recommend Cassandra on the idea that she will probably be good in the future against the current concerns. Is she someone you should summon for to clear HJP? Honestly, you're better off using Botan, who was free and provides far more DPS and immediate utility to your team instead of a stacking HP buff. Other top competitors would be the other 5★ Shadow Wands Veronica and G!Cleo who are both far beyond Cassandra, though she's likely to be the best permanent option for a while. In the end, there are too many maybe’s in Cassandra’s fate to make a strong recommendation you pull for her now.

Verdict: No, unless you’re willing to gamble on a future that could never come to pass.

Well I sat down with Patia and she gave me some much needed support. Mostly hugs and defense buffs. It was nice, but I think I'm still emotionally bleeding. Norwin was no help at all of course.

In line with recent 4★ releases, Patia is a support focused adventurer that is more concerned with buffing her team than with her own personal DPS. The flaw is that unlike Noelle or Emma, Patia buffs Defense and not Strength. In a meta more focused around survivability and needing to survive spikes of damage, this could be very useful, and has applications in Omega Nyx. As it is right now, it’s more of a novelty even in Nyx, especially since Healer Cleo already offers a steady stream of Defense buffs and healing to boot and is free. There is some limited potential to exploit Defense Double buff healing and prints, but again that’s a very narrow application that Healer Cleo can already fulfill satisfactorily.

Patia does offer a Bleed on her S2 along with Primed Devastation, meaning she’s not completely without DPS potential, but it’s so far below her contemporaries that you’re better off taking either a dedicated healer/buffer, or just going for someone who offers far meatier DPS options. Even 3★ choices like Althemia or Rodrigo offer better DPS than Patia at this time, and as I said Healer Cleo is a free support option. If you have Botan, use her instead, as she offers better DPS and debatably better support with a STR buff.

Verdict: No. Patia doesn’t bring anything new to the table.

Norwin is perhaps the most disappointing Adventurer added to the Shadow pool since launch. He offers poor DPS, poor support, and a poor weapon type. In other words, he doesn't offer much of anything.

Ok, ok. I can pull myself together. They were talking about alternate, or possible futures, not what will happen! I mean, Chthonius is now here for...some reason… even though I’m pretty sure we killed him? So there’s hope after all! Right? Right? Please say yes...

Like the rest of this banner, Chthonius is a sleeper who has the potential to become much better, and like Delphi already has a place in the meta. A 55% strength boost alone is nothing to sneeze at, but Chthonius also offers 10% Dragon Claws up to twice per quest for a total of 75% Strength.

Of course, this makes Chthonius very much a build-around dragon. You essentially need to be bringing Dragon Prep (The Bridal Dragon is nearly mandatory) and having an Adventurer who has some sort of boost or buff to being in Dragon form is a huge boost. Someone like Mym or G!Euden come to mind, though currently Shadow only has Audric. Audric synergizes will with Chthonius as he wants to shift in, get his boost, then shift back with his defense down and get ready to shift again. Still, Audric is fairly weak, and even in that scenario that are others who could use Chthonius better even without a synergistic kit. Additionally, Shinobi still reigns supreme as the top Shadow dragon, save in extreme niche cases.

Still, Chthonius might not be better than Shinobi for anyone right out of the gate, but he’s far from weak. He’s arguably better than Maritishen for most content, and he’s certainly better if you can Dragonshift immediately or in content where you can comfortably transform twice and get to his 75% Strength bonus.

Verdict: Yes. Chthonius is a strong alternative or supplement to Shinobi and is one of the better 5★ Dark Dragons.

As a 4★  STR dragon, Juggernaut is a perfectly viable option for Shadow DPS. Most players will start off with Juggernaut, MUB him with the Void Shop (or the stones we just got for free) and then graduate to a 5★ later. Even once you've gotten Chthonius or another dragon MUB, Juggernaut is a great way to flesh out your roster with your AI controlled teammates.

Verdict: Maybe. For new players getting one or two copies is an excellent plan, but more experience players will have better options.

This banner has the standard 4% rate. It is not a limited banner.

I think I’ve learned a valuable lesson today: Knowing the future is terrible, and we should all just eat cake and live for the moment because you never know when a prophet of doom is going to come by and ruin everything for you. Now if you’ll excuse me, I’m going to eat like, three tubs of ice cream and binge watch something until I feel better. I’ve been told the last season of Samurai Jack is good! I’ll start with that.

Final Word: Maybe. Only if you really need Delphi or Chthonius. Otherwise, pass on this one. No one is going anywhere.

Coming after the anniversary banner, many players stashes are in quite a dismal state. Fortunately, this is a good banner to pass on and save up for future things to come, like the Halloween or the Mega Man banners. Even though several good offerings like Delphi or Chthonius are here, Cassandra and the 4★s are especially unworthy of your wyrmite. If you do decide to go in, remember, please summon responsibly.

Should You Summon: Dragonyule Defenders Three: Poems for Thee

TAKE YOUR WYRMITE - Persona 5 crossover thoughts?
Contrary to the song, I definitely saw this crossover coming eventually. What I didn’t…
Battle Chart?
Hello everyone! I’m still fairly new to this game, but for the most part, I’ve been…
Always the same Gala Unit showing up!
I play 2 accounts, just played two full months. Already I have 3x G luca on one and 3x…
Asking for Veronica build, and ideal team build
I have a question, i want to use veronica but i don’t know what wymprint i should put…
Newbie asking about Wymprint buff didn't max out
I have been playing dragalia lost for a while now, but there is one thing that i still…
Read More