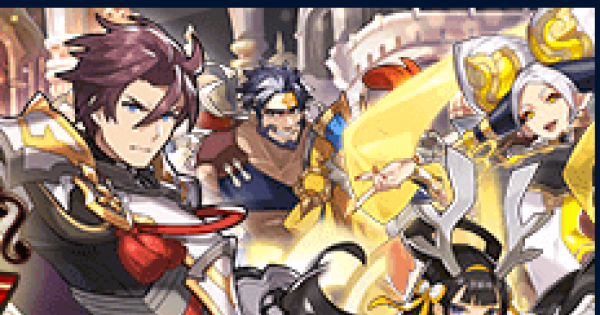 In the vein of Gala Adventurers past Leif is very good. He’s got an extremely solid kit that focuses both on debuffing bosses and on buffing his party. Thanks to his buffs, he’s personally very tanky, and can make his team rather hard to kill as well. He synergizes especially well with Double Buff prints, and also Sylas, who can really benefit from his co-ability and provide more double buff triggers.

Which is why it’s going to come as a shock when I tell you that you don’t need to pull for Leif in most cases. Why? He’s good, even great. The answer is simple: If you have Hawk or Tobias and to a lesser degree or Sylas or even Ranzel, you just don’t need Leif. At least, not right now. It’s going to be a good long while before we get Master Ciella, and it’s possible that fight will require the sort of tanky play style Lief promotes. For now though, you are frankly better off using Hawk and Tobias as their combo provides the most sheer DPS possible, and is the best for four DPSing Ciella’s wrath. True, Leif can pull it off too, and he’s far harder to kill, but with the way the game is moving, I doubt he will be mandatory for Master Ciella. There will be some new hotness before then.

Additionally, consider that this banner isn’t just Leif: there are two more Adventurers AND a dragon on this banner. Thus, chasing Leif is not as sure a prospect as it normally would be on a Gala Banner. Unless you’re fine with getting another featured unit, don’t go after Leif.

There is another piece to this, and this the fact we now get monthly Galas if my suspicions are correct. Thus, I would counsel most people to hoard their wyrmite, as it’s likely getting a Gala dragon will have a bigger impact on your ability to clear end game content. Especially since right now, Ranzel is a perfectly viable route to getting in clears in Expert Ciella.  Don't forget Hawk puts out more raw DPS and Tobias is a better straight support. Again, Leif isn’t bad, and if you want him, he’s a good pick up, but he’s not the best in Wind, and the meta is stable enough right now that you don’t need to rush to grab him.

Verdict: Maybe. If you already spiraled Hawk or run Tobias, you can safely pass. If you are more interested in solo runs or trying something new, Leif is pretty good and can be worth getting.

Zhu is good. Very good. He’s probably seized the crown of best Light Solo DPS from Alfonse, and likely by a significant degree. He’s got a solid kit, and he’s in an element that’s desperate for better Adventures.

But don’t go chasing him. Yeah, this is a banner where I buck a lot of trends. The reality is this: Zhu has no content to face right now. Master HZD is a graveyard, and Expert is barely better. No one is running that content regularly since not only is Kai Yun easier, it also awards far better weapons. So there’s no case to be made for pulling Zhu Bajie right now.

Again, I’m betting on something newer and shinier coming along before Dark Agito arrives. It would be foolish to blow a ton of wyrmite now, only to have Spiral Luca end up being better in every regard, or another similar situation. Additionally, if you have Alfonse (and he was free) spiraling him is more than sufficient to clear all current Dark Content. Heck, even the current freebie Wu Kong is decent enough for anything that isn’t Master HZD, and again, no one is really farming that content.

Verdict: No. Zhu is great, but there is a dearth of opportunities for him to prove it.

Second verse, same as the first, but with another point: if you happen to have Peony, why get Xuan? True, they don’t share a co-ability even if they do a weapon type, but as far as Light Buffers and support go Peony is simply the best, and she is significantly better than Xuan when it comes to DPS. You can of course run them alongside one another and they’ll both be good, but I’m personally leery of crafting multiples of a single weapon unless I were absolutely drowning in spare materials.

So again, Xuan is good, though not as good as Zhu in my opinion. I gave him a no, and I’m not ranking her any better.

Verdict: No. Though Light could use a shot in the arm, it won’t do it any good until it has content people actually run.

Ok, look, Sha Wujing might be the worst Adventurer on the banner, but his rates are frankly ludicrous. He also does nearly as much DPS as Gala Luca, who was top tier Light until this banner came out. Go get Sha, unless you’re incredibly unlucky it shouldn’t take more than a couple of ten fold summons. That debuff zone he provides has great potential for the future, and this is going to be by far the best time to try. Who knows, maybe you’ll even get lucky and get someone else you want too.

Verdict: Yes. This is a case of the rates being so good there’s little reason not to get an Adventurer that has at least some potential to be useful.

Hey look, a light Support Dragon! Wait, never mind, we already have Pop Star Siren. Seriously, Pop Star is so good she’s run off element, and I don’t really ever see a case outside of situations like Chitose where Tie is better than Pop-Star due to the skill haste pumping out more buffs in the long run. Even then it’s not really a clear cut thing because of how much benefit Pop Star provides to your team with the increased Dragon duration and the massive buffs she gives.

Unless you don’t have Pop Star Siren I can’t really see why you’d ever use Tie, and even then Cupid might be better because of his heals. Plus Tie really would only ever be used on pure buffers and healers.

Verdict: No. Tie somehow failed to bring enough assets to the table.

This is a weird banner. Gala Leif is limited, everyone else is not. Gala Rates Apply.

For the first time, I'm giving a Gala a Maybe. The odds are good, but the goods are odd.

While Leif is pretty great and so is Zhu, the fact is that you don't particularly need them to clear current content. Still, this is a Gala, so it's a better time than most to pull. However, in the current environment of monthly galas and limited banners, good is no longer enough, and I suggest you hold out for great.