Should You Summon? A Splash of Adventure 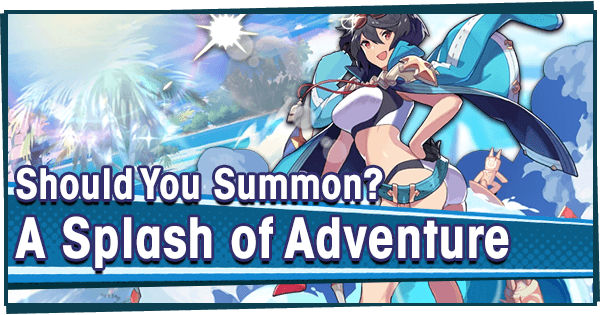 Avast me hearties! We be plunderin’ the high seas in search of treasure, arrr! With me on this voyage be me hearty crew, so grab yer wyrmite and guzzle that grog as I tell ye the tale o’ which o’ these salty sea dogs be suitable fer summonin’!

First on me crew be Julietta, and a finer lookin’ lass ye will never find upon the high seas! But as I always say, look’s don’t be worth much when ye be only havin’ one eye! Though in all fairness, Julietta be havin’ more to here than just eye candy, arrr. She be able to inflict Bog on all yer foes with her S1. This be great in some content, but it be mostly useless in Mercurial Gauntlet and High Brunhilda. Even so, Julietta do be havin’ a large number o’ buffs she can bestow upon her crew. While her S2 does take a while to charge, it do offer a fantastic 15% Strength buff for 15 seconds, and when skill shifted it becomes even more potent, oh aye, giving crit in the second form on, and a shield in the third before resettin’. This, combined with her Primed Strength ability, means that she can greatly increase the whole crew’s damage against a foe, even ones that do be resistant to Bog.

Sadly, her final ability, Bog = Team Strength, do be worthless in HBH and only passing fair in Mercurial Gauntlet. With the surfeit of Burn Res wyrmprints nowadays her Stun res do be neither here nor there in these times, though it do be worth notin’ that it’s still largely inferior to Burn Res.

So, should ye pull for Summer Julietta? Aye, ye should consider doing so. She’s not quite the buff machine that her shipmate Elisanne is, but she do contribute more in the way of her own damage, and inflicting Bog is no mean feat. Truth be told, she eclipses all other Water DPS previously released, save for a certain lass that also be on this banner...

Tradin’ in her Blade for a Sword, Summer Celleria be no slacker in her new form, oh aye. In fact, she be offering what be frankly some o’ the most ludicrous team buffs ever seen in Dragalia Lost before. Attack rate up be one o’ the strongest buffs ye can receive, and 20% for 10 seconds is a mighty powerful boost at that, though it do require Skill Shift III which do take a spell to charge. Combined with her Strength buff and Defense Buff which do trigger her own Strength Double Buff, Celleria do have a very strong support kit. Her Buff Time 30% do also mean that with the right wyrmprint her buffs could be lastin’ a mighty long time indeed.

Like Julietta, I mostly be settin’ aside Celleria’s ability to inflict bog as that be of little value in HBH and Mercurial Gauntlet, though I will admit it be more relevant than in the past, when ye would simply use Levithan for everything and us his bog to devastate yer foes, arrr. But I be gettin’ ahead o’ meself. Celleria be havin’ a nearly optimal kit overall, with strong personal DPS and even stronger team support.

So, should ye summon for her? Aye, ye should. Admittedly, Celleria probably be eclipsed ever so slightly in value by Julietta (or Elissane, who still be the Support Queen o’ the Universe) in some situations, but overall I be confident that she and Julietta be takin’ the throne as the top Water DPS from Xander. Outside o’ wave content o’course. That boy be ridiculous when he be gettin’ his Slayer’s Strength stacks up.

Arrr! They done done our boy dirty, me hearties! Where as all the lasses on this banner (and Summer Estelle, who be free) be some o’ the most fearsome sea dogs to ever sail the gatcha seas, Ranzal be the laughing stock o’ this banner. I can’t say it any other way: he ain’t good, buckos.

Ranzal do be able to inflict Bog, but pick me up and blow me down if everyone can’t be doin’ that these days! His Surf’s off ability do be fun, but it be harder to control than a galley with a torn sail and a busted rudder goin’ into the eye o’ the wind. Admittedly his S2 provides good recovery and a Strength buff, but it be expensive and takes a sight to charge. His last offense ability be potent, but it be only triggering once per quest and that do make it less impressive. He do boast primed defense, but that be a good skill only if ye be packin’ the right Double Buff abilities, which S!Ranzal lacks.

All in all, he be the only Adventurer on this banner who would no be welcome on me crew. He be marooned with the rest of the gimmicky Adventurers who have no place on a proper meta crew. Don’t be summonin’ for S!Ranzal, however temptin’ them abs o’ his be.

A finer captain no crew could ask for, arrr! Karina is a solid DPS choice, and with a wee bit o' support from her teammates can perform excellently in most content. Still, she don't be no greenhorn and has been in the summonin' pool for quite a while now. Newer players would do well to pick her up though, as she's a sight better than S!Ranzal in every regard. If ye get Julietta though Karina do be inferior in just about every way.

About the Pull Rates

The Dragon pull rate be adjusted for this banner mateys!

THIS DO NO BE A LIMITED BANNER! The Adventurers and Dragons here have been added to the permanent pool and will be available to summon from here on out (at normal rates of course).

Stand by to fire off a broadside! Of wyrmite, that is, if ye scurvy dogs be havin’ any left after chasing that blasted Gala that is! Simply put, Siren be one o’ the most powerful Dragons ever released. She does no look to upset the throne o’ Leviathan simply due to how optimal his attack sequence be, but her passive aura be one to contend with the 60% Strength buff. Many Adventurers are going to be best off with Siren, though old chums like Xander will still be wantin’ Leviathan since he be relin’ more on his Force Strikes for a high percentage o’ his damage.

Still, ye should seriously summon for Siren unless ye have a ship full of MUB Leviathan. She be a fine wench to be joinin’ yer crew.

He be no as good as Siren o’course, but this be a fine workhorse dragon for all yer budget needs, arrr.

Aside for bein’ an excellent excuse to celebrate Talk Like A Pirate Day a month early, this be a fantastic banner! The only dud is the 4★, which will that be a tragedy, does no detract from how fantastic this banner be.