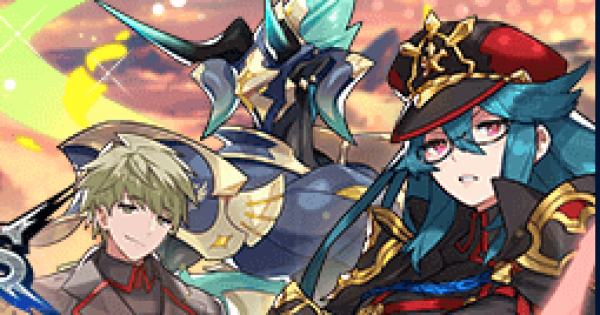 Should You Summon: A Clawful Caper

New winds are blowing, and Noelle is back with new messages and new heroes! Let's see what gusted into the Halidom for this banner!

Our newest adventure doesn't have a problem staying hydrated! Because she's always 'Kirsty!' OW! Euden, quit throwing things at me! If you have a better pun YOU can do these! Yeah, I thought so. Walk away.

For a long time, the only lance user worth mentioning for Wind was Sylas, who was unfortunately underpowered and underused. Now we get a new Wind Lance in the form of Kirsty, who offer's far better team support than Sylas and some really incredible damage on her own.

One thing worth mentioning is that this banner has brought about the long awaited release of the Poison Punisher print, The Plaguebringer. This is going to factor into Kirsty's evaluation heavily, as she has 30% Poisoned Punisher in her kit, but does not in fact have any way to enable Poison on her foes. This is a huge hole in her kit, and is going to heavily influence her rating. If you have a teammate who can reliably inflict Poison on bosses, Kristy goes from good to excellent. In ideal circumstances, Kirsty has the potential to have the highest DPS of any Wind Adventurer, beating out even bannermate Victor. That said, she requires dedicated set up to do so, and jumping through those hoops will not be easy as currently there is no meta Adventurer who inflicts poison in High Mercury groups aside from Addis, who is typically not used as he's inferior to Victor. That could change at any time and groups may adjust so that Master High Mercury favors someone like the new Joachim for his poison, but that is not currently the case.

Even without poison though, Kirsty possesses a powerful kit. Her S1 has a low SP cost at 2930 and she's got a 20% Strength Buff for 15 seconds on her S2 at 8534 SP. That's not Noelle levels of support as that S2 is kinda pricy, but it is a great skill nonetheless. However, what sets Kirsty apart is her Dauntless Strength passive. Every 15 seconds that she is not knocked back, she gains 20% Strength, stacking up to 60%. If you're knocked back though, you lose all stacks. This means that Kirsty requires essentially perfect play, though that's basically always true in Master High Dragon Trials and not something I'm going to take points off for as I did with Chelsea, as Kirsty can still take a hit, though it takes 45 seconds for her to ramp back up which is nearly an eternity.

This passive is what makes Kirsty. With it she becomes one of the most potent Adventurers in Wind, and combined with her S2 means she excels in damage and support. So should you summon? It's a toss up. Between her needing so long to ramp up, meaning that outside of MG51+ and Expert and Master Mercury she's never going to get her full stacks, and the fact that she needs a Poisoner to really be at her peak, she's not everything you could want. Still, she is strong, and certainly could find a place for herself in mHMC even if there's not a Poisoner around and will definitely make MG51+ attempts easier in a Poison Punisher group.

Final Verdict: Maybe. Kirsty is strong, but comes with several conditionals to unlock her full potential. If you run with a poisoner and confident in your ability to avoid knock backs, this becomes a yes.

How many Shadewolves does it take to defeat the Empire? According to Victor, just one.

When Victor came out, he was the uncontested best DPS that Wind had seen. Since then, very little has changed. True, in optimal conditions Kirsty can challenge Victor for his throne, but while she needs a great deal of set up and careful play to maximize her potential, Victor just bursts out of the gate and gets the job done.

Victor not only provides a notable amount of defensive support with his Water resistance and shield stapled on to his S1, but he deals an incredible amount of damage with his Bleed. He's got such a perfect blend of offensive and defensive merits, along with the fantastic Blade co-ability that even Kirsty won't be taking Victor's place on the roster any time soon. If you want to clear mHMC, Victor is still your one stop man to get the job done.

Final Verdict: Yes. Victor continues to excel and is a cornerstone of the Wind meta.

Here's the mail she never fails

It makes me wanna jump and wail

Along with the mail, you can always rely on the fact that Noelle is going to be a vital part of the metagame. No matter how insane the DPS of other Adventurers grows, Noelle's buffs will always be valuable as they'll always increase her teams Strength by 25% per buff application and her Wand Co-ability will increase Skill Damage by 15%. Her kit is so incredibly optimized for buffing that it's frankly hard to see how she could possibly get better. And then they released A Dog's Day, which gave Noelle more buff time and more skill haste, making her even better.

Noelle is a cornerstone of the mHMC meta game, and that's not changing anytime soon. She is invaluable for solo and group content and not easily replaced.

Final Verdict: Yes. You should pull on this banner until you get Noelle if you don't have her.

Sorry, this one isn't funny. No Joa-ks here!

In a great show of restraint, Cygames managed to go over a year without releasing another Wind Bow. But now Joachim is here, and I'm going to be honest, I'm still not impressed. Sure, he's substantially better than Louise, who is the next best Wind Bow, but frankly that's just not good enough. The one role I can see him fulfilling is that of poisoner for Kirsty, but I'm getting ahead of myself.

Joachim does present an opportunity to be the best Poisoner outside of Delphi, which is a pretty decent spot to be in. His Skill 1 has a decent cost of 2803, had has a high chance to Poison. It also deals more damage to Poisoned targets and has skill shift, with the second level giving higher chances to Poison and the third increasing team strength by 15% for 10 seconds. It's overall pretty solid. His S2 activates his S1 and gives a personal 25% Strength buff for a decent 5600sp.

The problem is that quite frankly, he doesn't do enough to compete with Noelle for the baiter role in mHMC. In fact, he's below Xaindeer, but Xaindeer has utterly failed to make a splash. True, being a setter for Kirsty and enabling a Poison Punisher team composition isn't a terrible niche, but honestly Noelle is still just better, and if you really want to do Poisoned Punisher Delphi is a far better option. Of course, in mHMC, you can't run a poison punisher comp, as you need either to run a wyrmprint slot to survive the opening blast, or you need both an Axe and a Lance coability or your team will run the risk of instantly dying.

Final Verdict: Maybe. He's not bad and he's certainly the best Wind Bow, but frankly Noelle is a way better choice for your team.

LANCE LEADER, WE ARE RECEIVING A NEW TRANSMISSION REGARDING A NEW DATA DOWNLOAD ON A NEW MECH. GOOD LUCK, AND MAY YOU DO THE HALIDOM PROUD.

AC-011 Garland is perhaps the oddest named dragon we've ever received, but he's certainly a powerhouse. The second of what I am labeling as the 2nd Generation dragons, like Daikokuten, he offers a total 80% Strength boost, with 50% always active and 30% conditional. Unlike Daikokuten, that boost is immediately available from the start, and only goes away for 15 seconds when you take damage. On the plus side, he also gives a 40% Shield that can seriously soften blows and improve survivability for small mistakes. So even if your DPS goes down for a short window, it's likely because you were able to take a hit. Best of all, the shield stacks, meaning I foresee this being used to cheese some mechanics in the future.

The one drawback is that Vayu is still better for some Adventurers as a general rule, as Skill Dragons are just that broken. Still, unless you already have several MUB Vayu lying around it's hard to argue that Garland isn't one of the premier picks for dragon DPS.

Final Verdict: Yes. As part of the 2nd Generation Dragon wave, Garland is a top priority to invest in.

Fighting fiends can be tough, but if you're between a roc and a hard place, I forget how I was going to end this pun.

Roc is a decent budget dragon. Newbies should get one, veterans already have plenty.

Final Verdict: Maybe. Don't chase this one, Roc isn't hard to come by.

This is not a limited banner. All featured Units have gone into the permanent pool.

Final Verdict: Yes if you don't have Noelle, then a solid maybe.

Windswept Warriors was an amazing banner when it came out, and this is basically a better version of it. However, we've seen some power creep in that time, and while this banner is a solid one, it isn't truly stand out. If you don't have Noelle you should definitely chase her, and Victor and Garland are certainly sweet pickups for your Wind Stable. I'm less enthused on Kirsty and Joachim, but they're still decent enough if you need to fill out a roster.

Newbie asking questions
@BirdmanSr wrote: Hello everyone I have a couple of…
I'm Sorry
@Garuda357 wrote: Just wanted to apology to all these…
Dogalia Lost :dog:
@SapphireSea wrote: Now that I’m done being salty after a…
A New-ish Player looking for Some Advice
@Fire_Embull wrote: Hey All, As I’m sure you can tell by my…
Cleared this I guess
@supersoren wrote: imgonline-com-ua-twotoone…
Read More