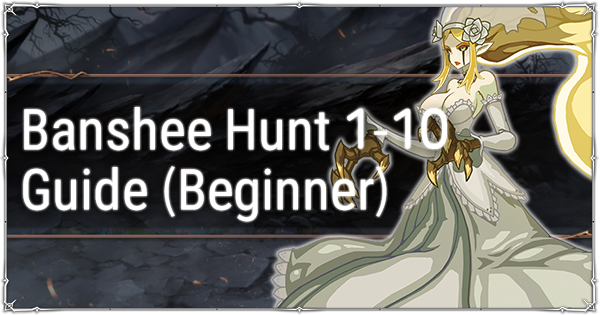 Table of Contents
Back to Banshee Hunt

The Banshee Queen has two main mechanics to be wary of: her poisonous Banshee’s Curse (Vengeful Spirit) and her ability to split into four miniature Banshees (Spirit Shield).

Banshee’s Curse--  At the start of that hero’s turn, the curse will activate and deal massive damage to your entire team.

Each of the Banshee Queen’s attacks will inflict a poison debuff for 2 turns. Unless the poison is removed, the Queen will attack the poisoned hero on the next turn, triggering an extra AOE attack that poisons all allies and inflicts the “Banshee’s Curse” debuff on a random hero.

Twice during the fight, as her HP falls below 2/3 and 1/3, the Queen will silence your team, dispel your buffs, and disappear into the mist before summoning four Banshee girls to fight in her stead. Unless these Banshees are wiped out completely within three turns, the Queen will reappear with a devastating AOE attack.

Advancing through stages 1-7 is not difficult. The Queen attacks a single hero each turn, inflicting poison, and when she splits, she summons 4 Banshee girls: 2 ice-type Mistychains and 2 earth-type Pearlhorizons. To win the battle, the general requirements are:

In stage 8, the Queen summons a light-type Gloomyrain to replace one of the Mistychains. When Gloomyrain dies, she instantly grants 100% Combat Readiness to her allies, including the Banshee Queen herself. If you kill her carelessly, your 3-turn time limit to defeat the Banshee girls will be shortened significantly. Therefore, you should focus on the other Banshee girls first and save Gloomyrain for last.

AI behavior is also worth considering against the four Banshees-- AI will go for kills over damage, so this puts Requiemroar and Glomyrain first in an element-neutral matchup. Dark allies like Commander Lorina will also target Gloomyrain.

In stages 9 and 10, the Queen summons two dark-type Requiemroars instead of Pearlhorizons. Both Reqiuemroars deal heavy AOE damage while inflicting silence and decrease-attack debuffs. The rest of the mechanics are the same as earlier stages, although the Queen and her curses are also more powerful. There are three types of strategies for clearing these stages:

The standard strategy is to play around the Queen’s mechanics, avoiding all of her punishing curses. You’ll need at least one reliable way to cleanse the Banshee’s poison each turn. During the splitting phase, you’ll need a combination of strong AOE DPS or CC heroes to quickly dispatch multiple Banshee girls. If you’re unable to kill all of them at once, focus on the two Reqiumroars first, then Mistychain, and finally Gloomyrain. It’s also worth noting that Mistychain’s attack also inflicts poison, so it’s important to cleanse it before the Queen reappears and triggers her curse.

If you lack DPS heroes with the firepower to clear the Banshee girls fast enough, you could choose to ignore that phase and instead use a team of tanky heroes that can survive the Queen’s AOE punishment. For example, you could position a bulky knight equipped with Aurius in the front, along with two healers and a strong single-target damage dealer. While this approach may seem simpler, it puts a lot more pressure on your healers and drags on the battle for a long time.

Lastly, you could blitzkrieg the Queen and kill her in one shot with an ultra-offensive team. In stage 10, the Queen only has 54k Health. With the right heroes and setup, you can instantly bring her to zero, which would bypass her poisonous curses and her annoying splitting phases. This strategy requires strong single-target damage dealers such as Challenger Dominiel, Luna, Yufine, Baiken, Sigret, etc. along with support heroes who can provide damage-boosting attack buffs and defense debuffs. An example of a viable strategy would include using Falconer Kluri to decrease the Queen’s defense, Tywin to provide attack and crit rate buffs, and then Challenger Dominiel equipped with Kal’adra to deal the finishing blow with her soul-burned attack.