Should You Summon? Tenebria 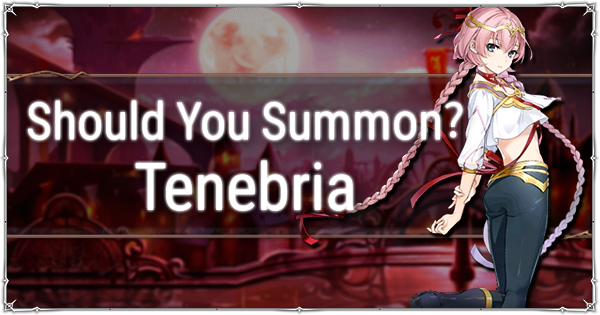 The phantom queen Tenebria has returned to the Covenant Summon pool to spin her nightmarish illusions once again. The question is, does the player want her spinning illusions for their team? This guide is intended to assist players with their decision to summon or save their Bookmarks.

In short, she is probably NOT worth summoning. She is capable of doing an acceptable job as a defense-breaker, but there are other Heroes who are much better at performing the same role as Tenebria while also offering other skills and strategic benefits.

Tenebria is a 5★ Fire Mage available in the Covenant Summon pool. The main function she performs is a defense-breaker, but she also has the ability to decrease enemy combat readiness and inflict sleep. Tenebria is built to push your enemy back and prevent them from attacking, however, there are other units who are able to fulfill this role more effectively, with less percentage chance of skill effect failure. The chart below provides a closer look at each skill: 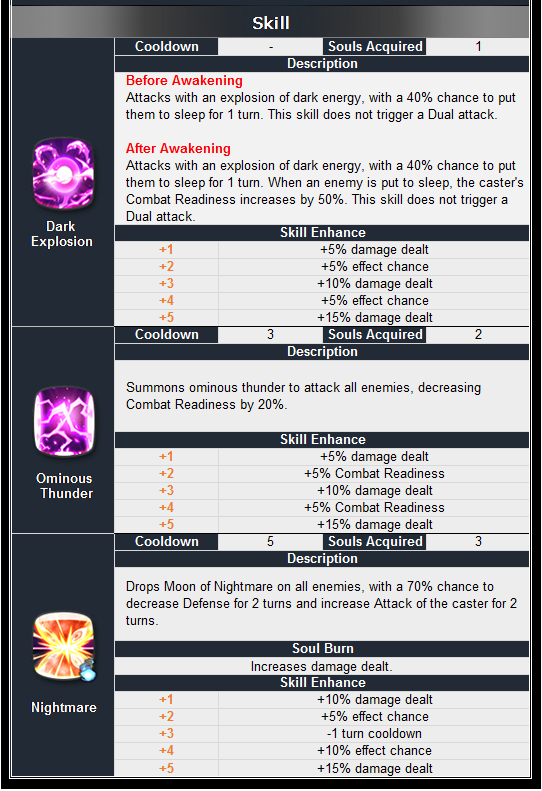 A Fire Mage who can't be played as aggressively as touted...

Tenebria’s kit was created with the intention of allowing the player’s team to strike first and more often, as well as decreasing the enemy team’s defense to make your offense more potent. The issue, as mentioned previously, is that Tenebria doesn’t outshine other Heroes with similar skills, that are able to use them to greater effect.

Tenebria’s S1 Dark Explosion and S2 Ominous Thunder are underwhelming. Both provide only a 50% chance or lower (assuming the player has invested enough to fully awaken the skill) to inflict sleep or provide combat readiness buffs to your team (and debuffs to your enemy’s team). A Hero like Dizzy (recognizing that her status as a limited-release unit means not all players were able to obtain her) performs much more effectively in slowing down your enemy and making their attacks less effective.

Tenebria’s S3 Nightmare would be more impressive if it had a 100% chance to decrease defense, but at 70% it becomes much less so. Krau is a more well-rounded Hero that fulfills the role of defense-breaker more effectively.

The Heart of Hypocrisy

The Heart of Hypocrisy

Usefulness in PVE and PVP

Tenebria does not offer any unique usefulness in PVE. There are other Heroes that cleave and defense-break more effectively and are a better use of resources for Awakening and Skill upgrades.

Tenebria is not the best choice in PVP for a defense-breaker or to debuff your enemy. She is by no means unusable, however, if you are considering whether to spend your Bookmarks to obtain her for the sole purpose of filling the role of defense-breaker for your PVP team we would recommend you wait for other rate-up Hero banners.

When considering what gear is most advantageous to use with Tenebria the player should focus on gear that boosts her substats in the following order:

Boosting her substats with these priorities focuses on the following:

The following Artifacts are recommended for Tenebria:

Sira-Ren: This is an Heroic Artifact Grade that (when at max skill level) grants the caster a 50% chance to inflict a random debuff for 1 turn when attacking. This synergizes well with Tenebria and her two AoE attacks.

Abyssal Crown: This is an Epic Artifact Grade that (when at max skill level) can be useful when used by a Tenebria build focused on debuffing and breaking enemy defenses. It grants a 24% chance to stun the enemy for one turn when attacking. This could be an alternative to Sira-Ren if the player does not have one.