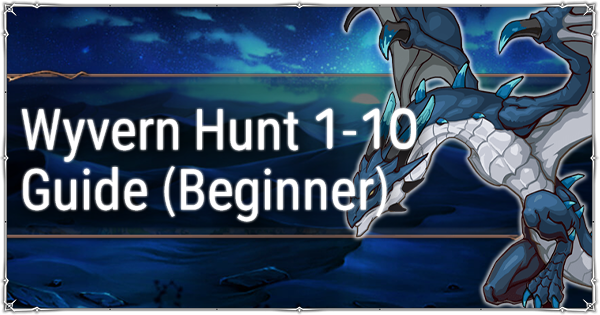 Back to Wyvern Hunt

Wyvern Stage 11 has entirely new, though still somewhat similar, mechanics, with some hidden ones as well.

The wyvern will spit a fireball, dealing heavy damage to a random Hero in your party, following the regular targeting protocols. Each fireball will charge the wyvern’s ultimate skill by 1 bar.

The wyvern will fire an additional time if it is not debuffed with at least 2 debuffs of any type during its turn (1-turn bleeds do NOT count toward this, as they fall off at the beginning of the turn - sorry, Axe God). As this counts as an extra attack, it will also charge the wyvern’s skill by an extra bar.

When the skill bar fills up, it will use a tailswipe AoE on its next turn, becoming Shielded (cannot be dispelled), immune to speed decreases, and commence charging a highly damaging AoE attack. If the shield cannot be brought down by its next turn, the Death Star, er, Wyvern, will end up outputting firepower of a magnitude that your shields won’t be able to withstand, doing extreme damage to anything in its way. Luckily, its Speed will decrease dramatically with the shield up, providing you with more opportunities to break it.

Wyvern Hunt 1-10 is therefore generally a balance between doing enough damage to destroy the shield during the shield phase and healing enough to make sure that your heroes don’t die during the damage phase. Due to the random nature of the targeting in Hunts 1-10, it is recommended that you have enough bulk to survive at least one set of 2 attacks, as the Wyvern does a lot of damage to its targets. OR enough Speed do debuff before the Wyvern (The Wyvern has around 205 speed, so you will need at least 210 speed to consistently outspeed it.)

Wyvern Hunt 11 is an entirely different animal, featuring the Onix Wyvern boss. While superficially similar to its smaller brethren from stages 1-10, it packs unique mechanics and a tougher punch.

INTENSIFYING FORWARD FIREPOWER! - The Wyvern will only target the front-most Hero with its Fireball Barrage, and will always attack 3 times (unless the target has died, or it is ready to use the tailswipe). The damage done by this attack will increase indefinitely as it is used due to the Super Acceleration passive. This serves as a soft enrage mechanic.

In addition, the Wyvern will do bonus damage with every fireball unless it has a minimum of three (3) debuffs.

Armed and Fully Operational - the Wyvern is fully immune to Speed Down. In addition, the new laser Fireball attack will strip away 1 buff PER HIT and does not miss, even against Ice heroes. Since the Wyvern does not miss, it is also much more likely for it to dole out critical hits, which can end your tank’s life rightly.

Exposed Core - The Wyvern’s new Fire Protection passive makes it takes 30% increased damage from Ice heroes. It is unfortunately fully operational against other threats, and gains a 10% CR boost whenever a non-Ice hero ends their turn. Bringing too many non-Ice heroes will lead to it firing when ready much, much earlier.

Lastly, if the Wyvern’s shield isn’t taken down in time, it will destroy the entire Hosnian system-- sorry; your entire team, doing heavy AoE damage, dispelling all buffs on your team, and finally triggering an additional shock wave that deals even more damage (provided that it doesn’t miss).