Community Posts with Keyword Florina All 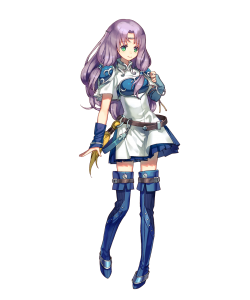 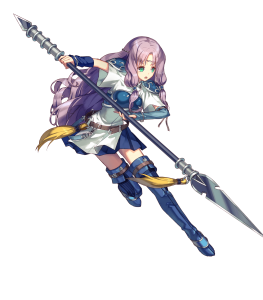 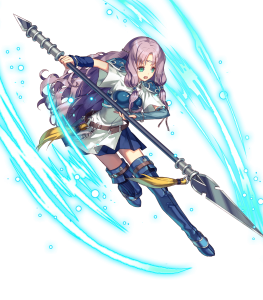 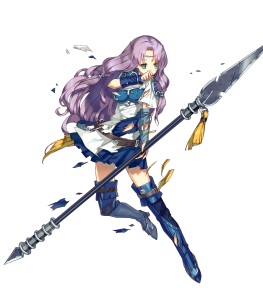 Florina has many barriers keeping her from being a good unit, but any one of them can be broken through with proper investment- the problem is that this prevents one from increasing her other stats.

Florina naturally comes with a very nice kit for dueling armor teams, where she’s not as set back by her poor Speed as she is when facing off against other units. She is perhaps the best natural counter to Winter Tharja in the game due to her high Resistance, her color typing, and her effective weapon.

Due to the versatility in armor units, Florina’s IV set is therefore also flexible.  Increasing her Defense via her superboon or her A slot (or both) are good options for her to increase her dueling capability, and may be more valuable than Attack since her weapon is effective against armor anyway. However, against the bulkier armors, then she will need all the damage she can get, and a +ATK Florina will deal 5 more damage per hit.

Florina’s Lance does not activate when she is attacked by a ranged user, therefore a Florina using her native prf generally wants to focus on her melee engagements. This makes Fury an excellent A slot for her, as it increases her effectiveness in all forms of combat, increasing her Defense to easier tank hits, while also giving her a better Attack and manageable Speed stat. With +DEF -HP IVs, Florina ends up with 39/52/34/36/41 in melee combat. She can run Renewal in her seal slot to counteract the recoil damage from Fury, however, Guard may prove to be more effective for her niche.

Guard 2 can be inherited from a four star unit and is sufficient enough to suit her needs, as it can allow her to mitigate the effects of Bold and Vengeful Fighter skills on her armored opponents. Quick Riposte can therefore be utilized in her Seal Slot so that she can double faster armors in her Enemy Phase.

Florina’s largest weakness is that her neutral stats don’t allow her to play to her strengths without heavy investment. A high Resistance stat is only suitable against manaketes or if the user has Distant Counter. Giving Florina such a high value skill may seem like a waste, but it allows her to be one of the best available mage counters.

With an effective Resistance stat of 46 (49 with Boon) when attacked by a ranged unit, Florina takes virtually no damage from most sources of magic and can even withstand being attacked by green mages or manaketes. When combined with a Special skill such as Iceberg or Glacies, Florina’s mediocre Attack stat is suddenly a force to be reckoned with and she’s capable of killing many units on retaliation. For this reason, Speed is chosen as her bane, as it ensures that she will be doubled by all but the slowest units, which guarantees an Iceberg proc.

Quick Riposte is her ideal B slot, though you can also run it in her Seal slot if you favor Guard over the Distant Def or Ploy Seals. Guard helps Florina to mitigate some of the potentially-lethal Special activations, particularly from armored mages who have access to Bold and Vengeful Fighter.

If she’s running as a standalone unit, Def Ploy helps to patch up her poor Attack markedly well, as it’s extremely likely that she’ll be able to activate it when baiting an enemy during Enemy Phase given that her neutral Resistance will be 38 with this build, 41 with a Boon in Resistance.

If you don’t have Distant Counter to invest, or if you don’t want to invest it in her, then this build loses most of its potency and you may want to consider a different weapon and skillset entirely; however, Fury or Water Boost can both help to recapture some of her effectiveness, and still allows her to deal with manaketes appropriately or bait mages without counterattacking.

Despite her tendency toward Speed in her previous iteration, Florina in Fire Emblem Heroes sports an unfortunately low Speed stat, with poor Attack and Defense stats to match. The only areas in which she is above-average is her Resistance and arguably her HP.

While this can be disappointing for her fans, there are definitely ways to build Florina to be lethal, though it often means either sacrificing a Hector for Distant Counter or using her for a niche counter to armor units, where Florina's Lance can overcome the stat differential by giving her an additional +4 to every stat.

Florina can easily be found at three and four stars, meaning that she is likely already in your barracks.

This means that there is generally no shortage of IV options to choose from.

Florina trades her below-average Attack, Speed, and Defense for a markedly high Resistance stat, making her fantastic at dueling manaketes and mage units.

Her prf, Florina's Lance, further increases her viability against armors by increasing all stats by 4 during an Enemy Phase melee engagement while retaining effectiveness vs armors. This makes her a great choice for an Arena Assault armor killer.

Of course, her Attack, Speed, and Defense suffer for her high Resistance

Despite her poorer statline, she doesn’t have any stats that are absolutely unredeemable, and with a full investment, her Attack, Speed, and Defense could all be singularly workable

Florina’s base kit does not synergize well with her stat spread, and she cannot inherit skills that would truly make her shine, such as Warding Breath or Null Follow-Up.

Furthermore, Florina's Lance only works at melee range, making her unable to utilize its effects when running Distant Counter to take advantage of her high Resistance stat.

A Melee-tank build for Florina, usefull for taking off melee enemies

Her weapon refine gives her +4 to all stats when facing melee units, usefull for facing armored units

Steady stance 4 gives her a good amount of defense to take some hits, Steady stance 3 works good as well if you dont have/want to invest that much on her

Guard bearing (i wanted to put this one while submiting this build but looks like it wasnt available) is a very good option for her, reducing the first hit of both melee and magic units and giving her better chances of surviving, Quick riposte is also a good option for her, since you want to increase her Def or Res with a boon, Florina's spd isnt that great and doesnt allow her to double attack units naturally

Joint drive atk is a little more ofensive, because she also has a low atk, it helps her to do some good damage, Joint drive Def is also a good option, giving her even more defense

Finally, Close def is a good option for her, since it synchronises perfectly with her weapon refine, giving her +6 def/res against melee unit

Uses DC to capitalize on her high Res, HP, and unique weapon effect, which makes her one hell of a magekiller on enemy phase. Glacies serves to amplify this, granting a huge damage boost when applied. Chill Spd to force speedier units into her range, since it’s still poorer than most even at +10. Guidance does its standard stuff; always useful to have, especially considering I don’t really use her on all-flier teams. Spd/Res Bond in the S, because she could always use more speed, and extra Res certainly can’t hurt- also synergizes well with Guidance.

IV: Spd or Def Increasing her Flaws with Def Boon can obtain a good amount of Physical Bulk and with Speed avoiding Follow Up attacks.

Weapon: Candy Cane+ or Courtly Candle+ (Def or Speed Refine)
With a super boon in Def and a Def Refine, she can offset her poor Defense and obtain a good Physical Bulk with a Weapon like Courtly Candle or Candy Cane

Special skill (Iceberg/Nontime/Aether)
Iceberg is a skill that use the good Florina's Res stat to increase the Damage output that in Florina is very poor.
Noontime is a Great Defensive skill but with a poor amount of HP recovery and with a weak attack stat can be poor reliable with a support that acelerate special activation Aether can be the best option.

B slot: Quick Reposte or Pegasus Flight
Quick Reposte is a really good Skill that allows Follow Up attacks in unit that cannot make it with only Speed
Maybe can be changed with Pegasus Flight thanks at her great 34 Base Res stat in other faster variations with Refine and or Boon in Speed, Pegasus Flight decrease her Atk and Def stats increaseing her damage output and general bulk.

C slot: Atk/Def or Atk/Spd Rein (I put Def/Spd beacuse the others not was in the options)
The Rein-like skills are the new best C in the Fliers, both Atk/Def or Atk/Spd decrease foe's Attack Stat increasing her general bulk, the defense or Speed are relative to the build Speed to avoid Follow Up attacks and Defense to increase damage output.

*b-skillis supposed to be Guard Bearing 3 and c-skill is supposed to be Atk/Def Rein 3.
Florina is a great tank. This build allows her to tank so many different units, as long as she stays close to her friends. Mystic Boost’s just there for healing, and can easily be swapped out for something that give you extra stats.
Great hero. Would recommend.

This is my standard set for Florina, tailored mainly for enemy phase. It works quite well on most occasions, although she loses hard against bows, daggers und strong green melee attackers.

The combination of her refined lance and Close Def gives Florina some serious bulk against melee attacks, especially dragons. With Fierce Stance and Quick Riposte, she can unleash powerful double counterattacks (unless the enemy has Null Follow-Up, Wary fighter etc.).

The special can be either Iceberg (activates usually on her second counterattack) or Glacies (giving her some potent firepower for the following player phase). It benefits from her high base resistance, which gets a nice boost on odd turns with her C passive.

Reciprocal Aid should be used for recovery, giving her the opportunity to use Quick Riposte once more. 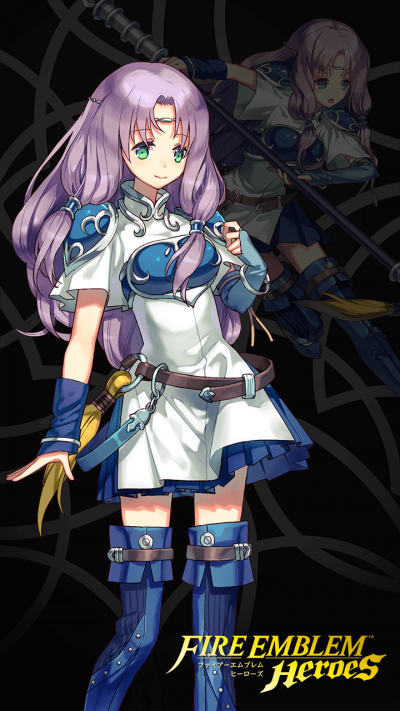