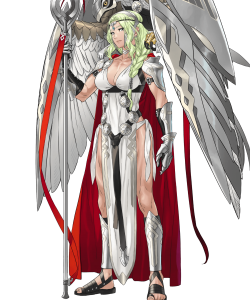 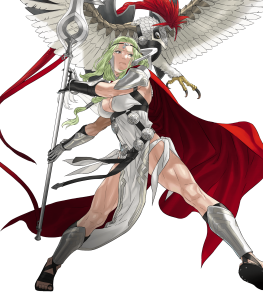 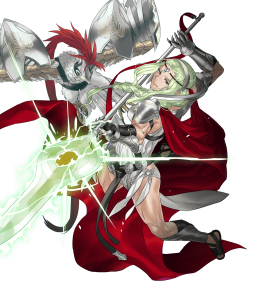 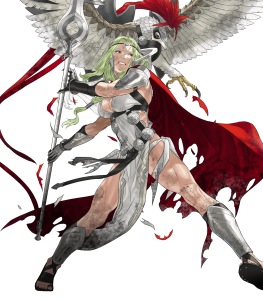 One of Nótt’s biggest strengths is her status alone; as a slot-boosting Dark mythic, she allows defense teams in Dark season access to the 7th unit slot. While 7 units are alive on the defense team, the unit in this slot will end their turn immediately at the beginning of enemy phase, allowing them to be danced by a dancer and potentially allow the team to start acting without needing to see an offense unit in their threat range. It can also be used for other useful effects like adding a third mythic for any unique effect they might have and their stat boost without losing score.

Hrímfaxi would be an incredible weapon even if it had nothing but the Pathfinder effect; allowing allied units to move through Nótt’s tile without expending a space of movement, effectively allowing teammates to move an extra space as long as it’s through a tile Nótt is in. This is incredibly useful on a defense team to allow units to threaten larger areas of the keep with attacks, dances, rallies, and so on. In addition to this, Hrímfaxi also grants Spd +3, and when Nótt is above 25% HP, +5 to all stats and an additional in-combat boost equal to the current visible buff on each of her stats.

Moon-Twin Wing is Nótt’s unique B skill, and it’s quite useful. In addition to providing the Dodge effect, reducing her damage taken by 4% for each point of Spd she has over her foe, up to 40% at max, it also inflicts Atk/Spd -5 on her foes. Both of these effects require her to be above 25% HP, but this condition is easily met in most circumstances.

Nótt’s base 41 Atk and 40 Spd are incredibly high and allow her to deal high damage while easily doubling most units, and gaining the full damage reduction from Moon-Twin Wing against most units as well.

While Nótt’s base 40 HP, 28 Def, and 27 Res are not exceptional, they are all solid, and in combination with Moon-Twin Wing allow her to take at least one hit from most units if she’s at full.

Like most AR-D units, Nótt’s bulk is drastically hurt by being hit by a Bolt Tower, which at the point of writing can be upgraded up to 45 damage at the start of turn 3 - potentially more than Nótt’s entire HP pool, dropping her to 1 immediately. This naturally makes her much easier to snipe. However, this does not interfere with her ability to provide Pathfinder at all, so it may not be important, depending on the team.

Nótt can easily gain buffs in Atk and Spd from Atk/Spd Menace and double those buffs with Hrímfaxi. However, this has the potential to backfire if she is Panicked, turning the buffs into debuffs and removing the extra stats from Hrímfaxi. There are multiple common effects that activate Panic on Aether Raids Offense, including the Panic Manor, Sudden Panic, and potentially Aversa, so this is a somewhat unreliable effect to have on a defense mythic.

Units that have enough Spd to avoid most or all of Moon-Twin Wing’s damage reduction, or wield a weapon that strikes twice such as Ninja Lyn with Tailwind Shuriken, can KO Nótt before she can counter. Some powerful slower units with Brave weapons may be able to do this as well, such as Legendary Leif. And there are also units that are fast enough to negate the damage reduction and KO Nótt in a single hit, such as Legendary Celica with sufficient Spd. Nótt does have the option to use Deflect Missile seal to check physical ranged Brave weapons, but that obviously comes at the cost of using another, more generally useful seal.

Nótt is likewise vulnerable to being oneshot by units that can ignore damage reduction, such as an archer with charged Deadeye, or Young Innes with any charged Special.

Nótt may struggle to do any damage to Green units with high Def, and take large chunks of damage even through Moon-Twin Wing’s damage reduction. However, this is in some sense not a true weakness, at least on Aether Raids Defense, since Pathfinder means Nótt can easily bring along a teammate with a better matchup against those units and basically ensure her teammate can threaten any tiles that she threatens, if not more.