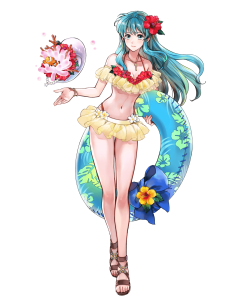 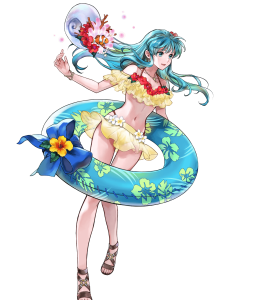 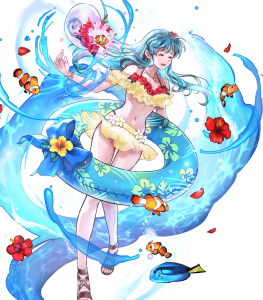 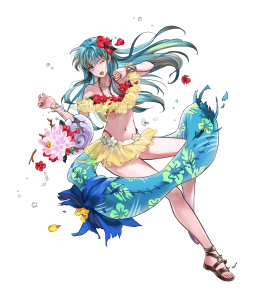 In addition to a stylish swimsuit, Eirika also sports 39/42 offenses that enable her to deal great damage and consistently perform follow-ups.

Mindful of her friends’ safety and concern, Eirika carries the most terrifying weapon of all: a seashell.

Eirika’s souvenir provides both offensive and defensive—in addition to both selfish and supportive—effects that are more than enough to pull her weight on any team.

Why this B slot is called Moonlit Bangle F as if we have a base Moonlit Bangle is, for the time being, a mystery. Nonetheless, Eirika’s personal B slot is very powerful, especially compared to the limited selection of B slots that ranged Fliers typically have to work with. Moonlit Bangle F:

Prone to being OHKO’d by both physical and magical enemies due to her 39 HP, 25 Def, and 22 Res, Eirika should generally be kept away from Enemy Phase combat.

While Eirika has a goodie bag of effects that makes her an overall fantastic and competitive unit, she lacks an effect that circumvents her poor bulk. Having any of a Brave effect, a Firesweep effect, or a Desperation-esque effect would make her a much safer initiator, but unless players replace Moonlit Bangle F with Windsweep, Watersweep, or Desperation, Eirika typically needs to survive a counterattack. Although Caring Conch and Steady Impact generally push her bulk to be enough to do this, surviving multiple counterattacks may be challenging, especially without Mystic Boost in her S slot for sustainability.

One way to overcome this is to pair Eirika with Bridal Catria, whose【Triangle Attack】effect from Wedding-Bell Axe grants her a conditional Brave effect. Additionally, on Aether Raids Defense, Eirika is usually allied with other ranged nukes (such as Valentine’s Chrom, Ascended Ishtar, and Winter Lysithea) that can cover Eirika’s weaker matchups while she covers theirs.