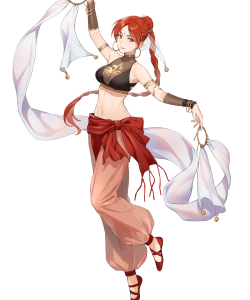 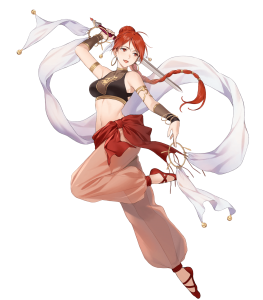 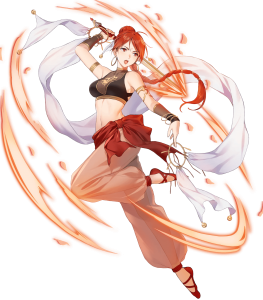 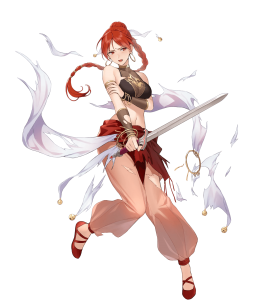 Afternoon of a Faun (Low-Investment)

A quite long-awaited entry from The Sacred Stones, Tethys saunters in Heroes as a colorless dagger-wielding refresher unit—free from seasonal limitations and low base stat totals that tormented Performing Arts Olivia and Hoshidan Summer Xander before her. Unfortunately, her stat allocation doesn't allow for much more than sponging stray tome attacks while Dancing as a main job.

Though it's not the main job expected of refresher units, her Attack is too low to do play any sort of flashy or substantial offensive role. This disadvantage is further compounded by Tethys's usage of daggers, which are generally limited by the number of high-Defense threats in the game as well as limited passive support utility outside of post-combat debuffs. Take into account her colorless status, and she won't be hitting hard anytime soon without extreme offensive investment.

Nevertheless, her fantastic magic tanking capabilities keep her a fresh choice in the line of refreshers, and the mere fact that she has the ability to Dance still gives her a ton of value in your barracks.

By simple virtue of having Dance—which grants an extra action to allies finished with their turn—Tethys is already a great support unit that can offer massive general turn-action flexibility to your team. Anything else Tethys can do is simply extra but welcome.

With great values of 35 Speed and 34 Resistance at base paired with an improvable 38 HP, Tethys can easily be purposed for satisfactory magical tanking while performing her dancing duties.

Tethys can definitely provide her share of passive debuffing support in addition to refreshing units. Her aforementioned Resistance stat allows her to utilize Sabotage and Ploy skills better than most units at your heed. Though Tethys's HP is pretty ordinary at first glance, dedicated investment in the stat also puts her HP above most other foes, giving her nice potential in utilizing Panic-based skills as well.

Tethys has no particular affinity to one color; thus, she typically attains even but favorable matchups against magic units of many shapes of sizes, many of whose lower Defense is exploited by the physical damage of daggers. Unlike her statistically close equivalent Leanne, she does not require Distant Counter to do the magic tanking she's great at.

Like Performing Arts Olivia before her, Tethys definitely isn't winning at competitions involving raw damage. 27 Attack at base is enough to wear down and eventually defeat conventionally frail mages, but will definitely fail to impress against units with even remotely decent Defense values.

Being colorless also means Tethys has no favorable color advantages to fall back on against particularly difficult opponents. Tethys therefore must rely on her sheer might of her stats and traits in most situations.

Tethys's raw base 23 Defense is the weak point in her otherwise nice survivability, leaving her limited to only reliably tanking magic and typically taking one physical attack if any.