What four star should I attempt to make a +10 out of?
@Waffleketchup72 wrote: Anyone have an opinion on what…
Is this a good team? For PVP
@AlcremieMaster23 wrote: Screenshot_2020-01-24-22-03…
Oh wow, I forgot this was actually a thing that happened in TMS
@MrShinyGyarados wrote: maxresdefault (11)1280×720 150 KB …
Mordecai: The Tank
@egervari wrote: I realized today that I never actually did…
Unit builder tournament #6 Smash bros edition
@Thehalohedgehog wrote: Yeah that’s right we’re doing 3 of…
Read More
GamePress
Featured Update FEH Content Update: 01/16/2020 - A Star is Born

Should You Pull - Guardians of Peace Edition 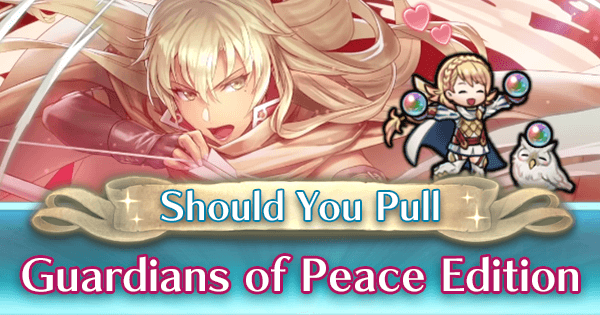 This is a standard 4 unit banner, so the odds start at 3%. As a 4 unit banner, your odds of pulling a 5* are fairly low compared to most banner types, so you should decide carefully if you wish to spend on any of these units, as it will likely require you to spend a decent amount of orbs per 5* unless you're a recipient of good luck.

Hero Of The Western Isles

Echidna joins Fire Emblem Heroes at long last as an Axe infantry unit, true to her appearance in The Binding Blade. Her overall statline is excellent, thanks in no small part to being a part of newly released gen 4 units. Her stats are overall very similar to Ross however, who is much easier to obtain as an immediate 3-4* unit, and his high Attack may be preferred over Echidna’s higher Speed. Still, Echidna is an excellent addition to your ranks if you desire an Axe fighter with excellent stats all around that can utilize a wide variety of weapons effectively, provided you do not already possess one of her contemporaries, such as Ross or Raven.

Compared with the five star Gerik

Compared with the three star Ross

Unfortunately, Echidna’s base kit is not particularly outstanding aside from her Rearguard, although it is a valuable skill for Defensive Axe units who prefer to maximize their Defense on Enemy Phase. Echidna herself will likely prefer a Slaying Axe instead, however.

The rest of her skills aren’t particularly Special, either. While Drive Atk remains a useful filler C slot skill, Sol is likely better off replaced with a different offensive Special such as Luna, while Brazen Spd/Res is highly niche and not useful on most units. Echidna’s Base kit is functional at the very least, but she’ll likely need additional skill inheritance in order to take advantage of her fantastic statline.

Echidna remains true to her appearance in Binding Blade as an Axe wielding infantry unit with great stats all around. She’s eerily similar to newcomers Gerik and Ross as an axe fighter with all around high stats, although she trades some offensive capability for higher Resistance compared to them. Her lack of a Prf weapon is a fairly large detriment, however, ensuring that she cannot exceed the capabilities of axe fighters who possess exceptionally strong exclusive weapons even in spite of her strong statline, such as Raven or Hilda. Still, Echidna is a solid addition to the Axe fighter group, and her statline allows her a fantastic level of flexibility in terms of potential builds.

You may want to pull on green orbs if:

You may want to skip green orbs if:

Igrene is likely this banner’s prize unit, and she makes a strong impression both in terms of fodder and as a unit. Her offensive spread of 37/37 is amazing, and it leaves her on par with offensive juggernauts such as Legendary Alm statwise. On top of this, Igrene also benefits from an Attack Superasset, allowing her damage output to reach incredible heights when combined with her exclusive Guardian’s Bow, which reduces the Attack/Defense/Speed of foes by 4 when her Speed exceeds the foe’s. Igrene does sacrifice her bulk in exchange for her high offensive potential however, and although it’s at least good enough to take one hit before going down, it renders her vulnerable to threats with Distant Counter somewhat, especially Blue units thanks to her status as a colored bow.

Compared with the four star Norne

Compared with the three star Rebecca

Igrene’s base kit is fantastic, and as a result she requires very little investment to maximize her effectiveness. This also means she has a plethora of powerful skills to inherit to your units, as Life and Death 4/Special Spiral/Pulse Smoke are all amazing skills in their own right. With Life and Death 3 inherited from 3-4* units such as Sothe, you can obtain both Life and Death 4 and either Pulse Smoke or Special Spiral in a single inherit, giving Igrene high value as both a unit and as fodder.

As the First Red Bow unit in the game, Igrene makes an incredibly strong impression thanks to her powerful statline and skills as well as her exclusive weapon. Her incredible offensive statline gives her outstanding damage output, especially if one can acquire a +ATK IV for its 4 point increase. Igrene’s status as a Red Bow is a mixed bag, however. While she’ll have a strong matchup against powerful Green units such as Legendary Hector and Surtr, she’ll struggle even more against blue threats in general. Igrene’s mediocre defensive capabilities also render her vulnerable to counterattacks from Distant Counter users, so caution should be taken when facing them with her.

You May want to try your luck with red orbs if:

You may not want to pull on red orbs if:

The release of Larum comes directly after the introduction of Tethys, a dancer who possesses an incredibly similar statline to Larum. However, Larum possesses significantly higher Attack and Speed, while Tethys possesses better Defense and Resistance, making Larum the superior choice if one desires a ranged dancer with good offensive capabilities. Larum’s Resistance is also fairly high at 30 Base, allowing her to soak a good amount of magical damage, although her poor Defense leaves her highly vulnerable to any form of Physical Damage.

Compared with the five star Tethys

Larum’s Base kit is decent, although Disarm Trap will need to be replaced if one plans on using her in modes other than Aether Raids. The introduction of the Dragonslasher adds the once seasonal only Dragonslaying Splashy Bucket to the main pool, which remains a fantastic skill to inherit for any dagger unit if one needs a colorless unit with Dragon effectiveness. Larum’s Speed/Res Gap is also a fairly useful support skill, although it’s strict requirements can make it difficult to control which unit it buffs.

Larum’s main advantages are her good offenses and decent Resistance, which allow her to serve as a good check to magic users alongside her utility as a Dancer. However, aside from her good stats, Larum fails to stand out among the competitive dancer pool, and she’ll struggle to compete with other dancers such as Hoshidan Summer Micaiah and especially Legendary Azura. Still, Larum is one of the better options for a dagger dancer available thanks to her strong offensive utility.

You may want to pull on colorless orbs if:

You may want to skip colorless orbs if:

Perceval makes his long awaited entrance into Fire Emblem Heroes as a member of the bloated Lance Cavalier group, but he manages to stand out thanks to his strong stats and powerful exclusive weapon, reminiscent of the previously released Sirius. Their statlines are also very similar, and the only major difference between the two statwise is Perceval’s higher Resistance vs Sirius’s higher Defense. Still, Perceval’s strong offensive statline of 32/37 ensures that he will have little trouble dealing damage on the offensive, while his mixed defenses of 28/27 grant him decent durability, especially when combined with his innate Lull Atk/Spd.

Compared with the three star Oscar

Compared with the three star Peri

Compared with the five star Sirius

Much Of The Same

Perceval’s similarities to Sirius not only lie within their stats, but also within their exclusive weaponry as both grant +4 bonuses to all of the users stats with differing conditions. However, Perceval’s has the advantage of granting him the Guard effect in addition to this stat bonus, at the cost of it only being active when the opponent’s HP is full, making it much less reliable than Sirius’s Sable Lance, although much more powerful when it activates. Their kits are also very similar, as they both possess Lull Atk/Spd and a Solo skill, although Perceval also has Rouse Def/Res in addition to these, making him fantastic for skill inheritance.

While Perceval is incredibly similar to the previously released Sirius and doesn’t break any new ground in terms of lance cavalry, Perceval remains a strong option among the Lance cavalry group due to his fantastic stats and powerful exclusive weapon. He also possesses a complete base kit, meaning one doesn’t even have to invest any skills into Perceval to maximize his effectiveness outside of an Assist skill.

You may want to pull on blue orbs if:

You may want to skip blue orbs if:

What four star should I attempt to make a +10 out of?
@Waffleketchup72 wrote: Anyone have an opinion on what…
Is this a good team? For PVP
@AlcremieMaster23 wrote: Screenshot_2020-01-24-22-03…
Oh wow, I forgot this was actually a thing that happened in TMS
@MrShinyGyarados wrote: maxresdefault (11)1280×720 150 KB …
Mordecai: The Tank
@egervari wrote: I realized today that I never actually did…
Unit builder tournament #6 Smash bros edition
@Thehalohedgehog wrote: Yeah that’s right we’re doing 3 of…
Read More
Menu