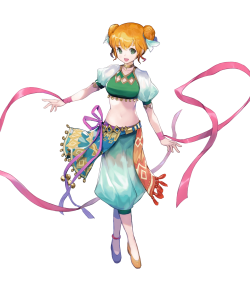 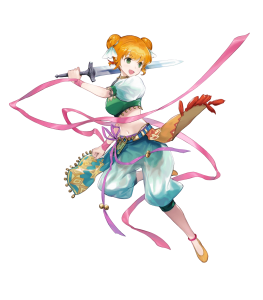 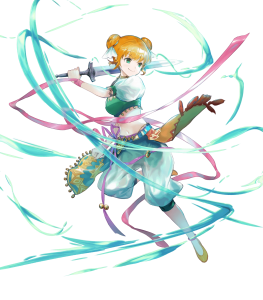 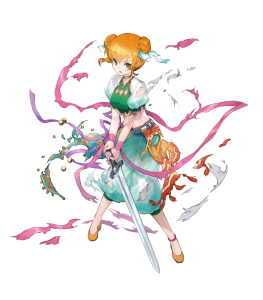 Serving as a bright and optimistic leader of the Etrurian resistance forces, Larum joins Heroes as an Infantry colorless dagger Dancer! Her hard work has clearly paid off, as Larum has no trouble crushing her competition and standing out as a flexible and powerful unit.

Larum boasts startlingly high offenses for a Dancer at 32 Attack and 39 Speed. These are among the strongest out of all Dancers and are Larum’s claim to fame in comparison to her colorless dagger Dancer competition: Performing Arts Olivia has 28/34 offenses and Tethys has 27/35 offenses, both significantly lower than 32/39. With solid Attack and incredible Speed, Larum is more than capable of playing an offensive role or a mix of both offense and support with weapons such as Lethal Carrot, Broadleaf Fan, and her native Dragonslasher. She can also utilize skills such as Heavy Blade and Flashing Blade to accelerate her Special charge and activate her Specials more frequently.

Larum also has a passable 37 HP and decent 30 Resistance, allowing her to perform well against magical enemies and utilize Ploys and Sabotages effectively. As with many other Dancers, however, Larum suffers from a poor Defense stat at a measly 18. In combination with her 37 HP, Larum’s 54 physical bulk leaves her prone to being OHKO’d by units that target Defense, especially since she is unable to have weapon triangle advantage against any enemy.

Thanks to her Gen 4 Dancer BST granting her a stronger statline than many other Dancers, Larum is a very flexible unit. At high-investment, Larum can utilize skills such as Sudden Panic and Panic Ploy if players stack her HP high enough with a weapon refine, an HP Asset, and/or HP-increasing passives such as C Duel Infantry and HP +5. With her solid 30 Resistance, players can opt to run Larum with Ploys and Sabotages to support her team by debuffing enemies rather than relying on panicking enemies’ buffs. As a Dagger unit, Larum doesn’t necessarily even need to run Ploys or Sabotages because of her access to the Smoke Dagger, which inflicts -6 Atk/Spd/Def/Res to the target and all enemies within 2 spaces after she attacks; as such, she can both debuff and inflict panic on enemies. Players can even run a mix between offense and support and Larum will still perform both roles well. Larum’s Infantry status only adds to her flexibility; while she cannot fly over most terrain like fliers or move up to 3 spaces (under normal conditions) like cavaliers, she can utilize skills such as Guidance and Ground Orders to increase her movement options, which in turn increases her dancing, escaping, and offensive capabilities. Offensively, she also has access to skills such as Bonus Doubler and Null Follow-Up.

With a fantastic 37/32/39/18/30 statline, access to many useful daggers, and the ability to dance, Larum is definitely worthy of her status as a leader in the Etrurian resistance. Her incredible flexibility and offensive and supportive capabilities make Larum an extremely valuable unit that can pull her weight in nearly any situation.

32 Attack and 39 Speed are excellent offenses, especially for a Dancer. Larum can easily play the role of an offensive Dancer with weapons such as Lethal Carrot and Broadleaf Fan. She can also utilize Heavy Blade or Flashing Blade to activate her Specials more frequently, helping her take down high-Defense enemies.

Amazing support outside of dancing

With a solid 30 Resistance, Larum can utilize Ploys and Sabotages to further support her allies by safely debuffing enemies. While her 37 HP isn’t great at base and her 5*-locked status makes her availability and mergeability rather poor, Larum can still panic reliably at high-investment. As a dagger unit, Larum also has access to the fantastic Smoke Dagger, allowing her to inflict -6 Atk/Spd/Def/Res to her target and enemies within 2 spaces, so she is capable of debuffing and panicking at the same time.

37 HP, 32 Attack, 39 Speed, 30 Resistance, access to daggers, and access to dancing is a recipe for immense success and flexibility. Larum can perform a variety of roles effectively and even at the same time, including offense, dancing, Ploying, Sabotaging, and debuffing. As an Infantry unit, she also has access to powerful skills such as Bonus Doubler and Null Follow-Up and can utilize her flying allies’ Guidance and Ground Orders to gain more flexible mobility.

Larum’s primary weakness sprouts from her 37 HP and 18 Defense. 54 physical bulk is dangerously low, as many enemies that target Defense can OHKO Larum.

As a colorless unit, Larum can never have color advantage and may suffer from color disadvantage. This decreases her survivability and damage output.