Should You Pull - A Monstrous Harvest Edition 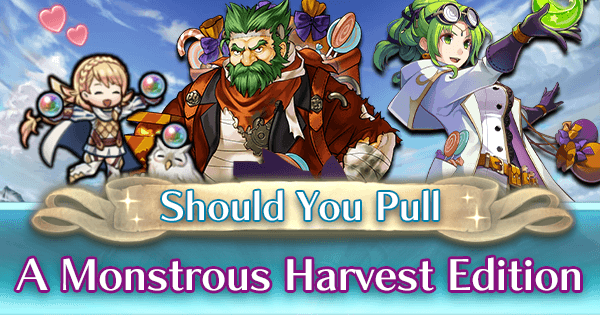 This is a standard 4 unit banner, meaning that the odds start at 3%. Since this banner features 1 unit of every color, the odds for pulling on each color are good, though marginally less than a 3 unit banner.

I imagine you were just as taken by L'Arachel’s gorgeous art as I was. Well, try not to get lost in it because you’ll find that what she offers is far from the most standout unit on the banner. Sporting an impressive sum of Attack and Speed at the cost of incredibly poor overall bulk, Halloween L’Arachel falls in line with the typical glass cannon mage archetype.

Despite her marginally superior stat spread, L’Arachel’s lack of a unique weapon or skills makes her seem less appealing when compared alongside units such as Olwen (WT) and Gunnthra who compete for her role as an offensive green mage cavalry.

Compared with the five star Gunnthra

Compared with the 5 star Olwen (WT)

Another stellar addition to the list of “characters who received an alt before their base version was available”, Ilyana reminds us how we feel when we eat too much Halloween candy. It has been a while since we last had an armored mage that was this slow and bulky. Illyana’s statline is actually very comparable to Winter Tharja with slight variances in Attack and Defense.

With such a high value in Attack and a superasset to boot, Ilyana’s base kit seems to be centered around getting in and doing as much damage as possible in a single round of combat. This includes skills such as Bold Fighter as well as a Special that scales from her incredibly high Resistance.

Compared with the five star Lute

Compared with the 5 star Kliff

Am I reading this correctly? 174 BST on a RANGED armored unit? It’s almost jarring to see how Dozla compares to his predecessors, edging out Winter Cecilia in every single stat except for Resistance. Similar to her, Dozla can fit a variety of roles thanks to the numerous options available to dagger units.

Short End of the Stick

Compared with the free Winter Cecilia

Compared with the three star Sothe

What makes him stand out?

Having the skills unique benefits of armored units as well as the flexible weapon options of a dagger allow Dozla to be used in many different ways both offensively and defensively. Further compounding this is an incredibly well-rounded statline with an incredible 38 base Attack (plus a superasset) and solid values in everything else.

Two is better than one

I imagine you didn’t have to look twice to see that Hector (and Lilina!) are big stars of this banner. In addition to looking extremely cute, these two introduce the brand new concept of “duo heroes” to the game. This alone makes Hector stand out completely compared to every other sword armor in the game.

Some things will never change

Compared with the three star Draug

Hector is more than just another big ball of stats. Through a trigger similar to using an item in Arena Assault, he can activate the special ability of his duo unit. This deals 20 out of combat damage to all enemies within 3 columns centered on Hector. This can be used one time every map.

The idea bolt tower that can be activated whenever and wherever one chooses probably caught the eye of those who frequent Aether Raids. This can be used in an assortment of different ways including but not limited to forcing a specific unit with infantry pulse to lose HP on the first turn, preventing the rest of the enemy team from having their Specials accelerated, cutting down the HP of bulky frontliners such as Seliph in order to more easily clear a way for your own units, and even making use of weapon that are based on foe’s HP such as Athame.