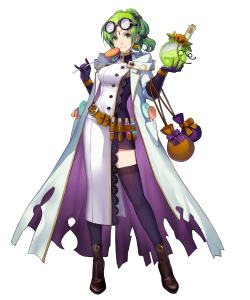 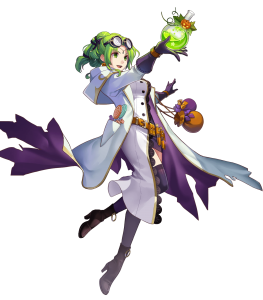 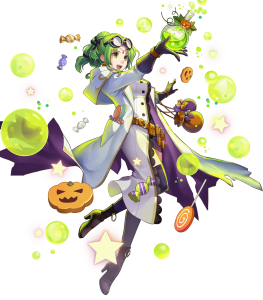 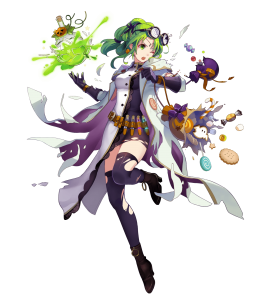 Halloween L'Arachel’s offensive statline is decently competitive among green tome cavalry, giving her a decent baseline for dishing out damage. She’ll have trouble consistently performing follow-up attacks against faster foes without a Speed asset and considerable speed stacking, however.

Fails to stand out

Halloween L'Arachel lacks any distinguishing features aside from her statline, so green tome cavaliers with superior statlines and/or exclusive weapons(Ex: Summer Selena/Gunnthra) will handily outclass her no matter what she does.

Halloween L'Arachel pays for her offensive statline with her defensive stats, and her low bulk on both sides makes her susceptible to being KO’d in a single hit by any decently strong attacker, although the Plegian Torch can alleviate this flaw to some extent.

I was hoping for +spd, but can’t complain about +atk!

Build is pretty straightforward and aims to capitalize on chip damage. After one nuke, she’s in desperation Range and becomes a monster (ha!) with a Hone Cavalry / Atk Tactics buff. Heavy Blade + Desperation + Base attack of 59 (after merges / flowers) puts her in an excellent position to score OHKOs against bulky greens an clears as well.

Finally, even Speed Wave was inherited to give her a bit of self reliance and also adds nicely to a blade tome build.

Though her base kit is already fairly powerful, L’arachel’s Madness Flask takes away health every use, which can activate her Desperation skill without her taking any hits— therefore this build centers around making it possible for her to double any unit and maximize the efficiency of the skill without leaving her in harm’s way. Her attack stat is also relatively high for a cavalry green tome, so a +atk unit and a bit more care can be used as well for harder hits.

Help with ways of counter Yuri?
Hi, anyone know ways for counter Yuri? Is beacuse in summoners duel people use…
What to do with priam?
Hey y’all. So I’m really not sure how to proceed. I already made a +1 priam, but I…
How often are: Double Special Heroes Banners?
How often are: Double Special Heroes Banners? 2 posts - 2 participants …
Double Special Hero Banner
Well didn’t see anything on this so here goes. Free summon and my first …
How to kill F!Edel
Pfft, you thought I was asking for help killing her? Nah. I’m talking about the non…
Read More