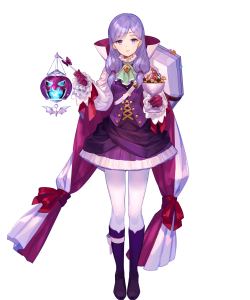 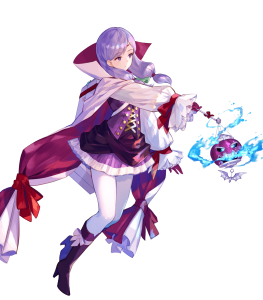 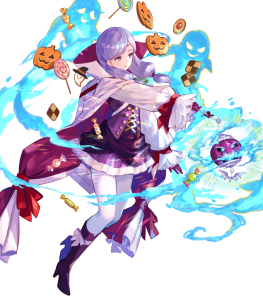 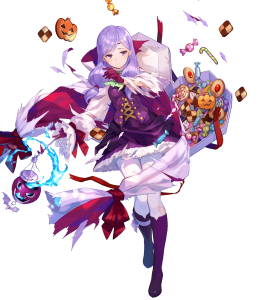 Halloween Ilyana’s fantastic mixed bulk, innately high firepower, and access to Special Fighter allows her to quickly accumulate a tremendous amount of effective survivability, making her extremely well-suited for a defensive role. Her four-point +ATK IV is a particularly standout option here if utilizing healing Specials, as combining the two provides her with improved sustainability and damage output simultaneously; this also serves the purpose of increasing her likelihood of OHKOing incoming threats, which can prove useful in mitigating damage. Boosting one of her defensive stats with a +DEF or +RES IV is also a valid course of action to directly diminish the amount of damage she receives.

Halloween Ilyana can also make use of her unique strengths as an armored mage to go for an all-out offensive approach and achieve devastating combat prowess in the Player Phase, simply requiring the proper support to do so. Since this build is centered upon heightening her damage output as much as possible, a +ATK IV (alongside accompanying team support to her Attack stat) is ideal here.

Joining the infamous ranks of units who’ve had a seasonal variant introduced before their base version, Ilyana makes an unexpected appearance during this spooky season dressed as a mysterious vampire princess (as well as the game’s second blue armored mage).

Her statline is quite strong and falls in line with the standard recipe for an armored unit, featuring moderate to excellent values in everything besides Speed; her Attack is especially remarkable as it can be enhanced from its already great base value of 38 to monstrous levels (pun intended) with her four-point Asset in the stat. Halloween Ilyana’s access to the powerful Fighter skills further solidifies her immense combat prowess and help circumvent many of her weaknesses, providing her with various boons such as accelerated Special cooldown and guaranteed follow-up attacks. Combined with the other benefits attached to being an armored unit (such as class-exclusive buffs and a substantial boost to her BST), these aforementioned strengths make Halloween Ilyana a versatile unit with the means to excel at fulfilling different needs.

However, she is also plagued by several weaknesses of her own. Most notably, her low Speed causes enemy follow-up attacks to be a frequent occurrence and can cause her at times to take more damage than necessary. In addition, Halloween Ilyana’s susceptibility to armor-effective damage can pose a significant hindrance given the prevalence of sources of such damage across all game modes, potentially disabling one from comfortably deploying her at all depending on the strength of the enemy forces. Her status as an armored unit also cause her mobility to massively, hindering her ease of use unless provided with the support of skills like Armor March, Guidance, and Ground Orders. Nonetheless, while not necessarily anything overpowered, Halloween Ilyana certainly makes for a delightfully sweet addition to the game and proves her worth as a strong ranged attacker with the means to excel offensively and defensively.

One of her statline’s defining aspects, Halloween Ilyana’s base Attack stat of 38 is one of the highest amongst all ranged units and offers her immense offensive might, especially when paired with skills like her native Bold Fighter. Furthermore, this stat also happens to be a four-point Asset which, when taken advantage of properly, allows her to obtain a phenomenal offensive ceiling.

Halloween Ilyana’s moderate amount of HP combined with her excellent defensive stats allows her to stand tall against most forms of sustained offensive pressure, making her quite durable.

Halloween Ilyana’s status as an armored unit benefits her greatly, most notably because of her access to the Fighter skills which help her control the pace of battle to her advantage; this also lets her receive support from class-exclusive buffs and a substantial boost to his BST.

Thanks to her well-optimized statline and access to the many benefits of being an armored unit, Halloween Ilyana can be built to fulfill a variety of purposes and excel at doing so, making her an incredibly flexible unit.

Halloween Ilyana suffers from an innate weakness to any source of armor-effective damage and can quickly fall to units wielding them, making it crucial that one exercise extreme caution when deploying her on maps where such damage is present.

Although her status as a ranged unit does make this a lesser concern for her in comparison to her melee contemporaries, her inability to move more than one space at a time hinders her ease of use (especially when built for an offensive role) if one does not have access to skills that can circumvent this.

Halloween Ilyana’s low Speed renders her prone to follow-up attacks from incoming foes. While her strong defensive stats do lessen the impact of this weakness, it can still cause her to take more damage than intended if one does not properly account for this.

Optimized to tank ranged units.
A-skill can be flexible based on needs, for solely enemy phase distant defense 4 is good.
Best pared with a red unit with higher mobility (or red armored with armor march)
Distance defense skill seal added for good measure

Spooky girl with.... scarily unoptimal IVs. But hey, she still works a treat!

This low-investment build requires the sac of a single 4 star, and is focused on mixed bulk and offense.

I Refined the Spooky Censor up with +DEF to patch her up a bit, which leaves her at a not-awful base of 32/40 for bulk without buffs. Once in Brazen range, she&#039;ll hit cartoonish 67 atk with 39 def and 47 res to back her up. Definitely workable!

C-slot is flexible - I like ATK/Res gap well enough, but also figure Hone / Fortify Armors and the like are good investments given how common they are. As a bonus, Sheena can also inherit Svalainn&#039;s Sheild which might be situationally useful on some maps.

Hi! This is the first build I ever shared! Forgive my latino grammar aswell please

Introduction:
So, once i got her I saw she had incredible atk/def/res/hp stats and taking her weapon, abilities and stats into consideration i wanted to try some double Brazen builds which can be deadly during player phase and pretty tanky in both phases.
Hungry and Deadly Vampy (Ranged Iceberg Cannon Player Phased Build)

Assist skill: Reposition / Summoner&#039;s choice
= Not much to explain really °-°

Special: Iceberg
= Thanks to her current B (Bold Fighter) she can hit ranged or DC-ed units, get hit and use Iceberg on her follow-up attack dealing a really great ammount of damage once she had entered in the Double brazen effect.
*No, Moonbow is a bad idea, it might be &quot;Halloween-ish&quot; and easier to use against units who can&#039;t Counter-attack but a Green or Green Triangle Adept-ed unit won&#039;t suffer much damage.

A Slot: Brazen Atk/Res - Brazen Def/Res - Brazen Atk/Def
= Spooky Censer is a double edged weapon so lets use it in our flavour, Brazen skills demand the user to be low so it will provide you some extra stats during combat, Atk/Res will increase her offensive output but I reccomend Def/Res since she will be able to tank some
Archers, Daggers or even melee units since and reach a really good 40 Defense and 47 Resistance with neutral IVs and without enhance her weapon, plus it is more accesible because Male Kanna has it. ^~^

B Slot: Bold Fighter
= By far, the best and cheapest(Since she already has it) option, why? Well...
*Special Fighter: She has bad speed so she will get doubled without much effort and will not be able to use her special on time.
*Vengeful Fighter: Same thing as Special Fighter plus she might recieve 2 hits before using her special.
*Quick Riposte: Brazen? Fury? No? Ok :l

C Slot: Res Ploy - Atk Ploy - Atk/Res Gap
= Thanks to her incredible Res IVs she will love using Ploys in order to deal more damage (Res Ploy) or recieve less damage (Atk Ploy)
Nevertheless, her current Gap skill can be really useful in order to buff one of her allies.

S Slot: Brazen Atk/Res - Brazen Atk/Def
= Same thing as her A Slot, Brazen will do great thanks to her weapon, plus the summoner will get to choose the refine, A and S slots on Ilyana in order to maximise her defensive, offensive or both according to their needs, it&#039;s Halloween so... Lets enjoy it!

Gameplay:
Ilyanna prefers the Player phase thanks to Bold Fighter, she might also demand THE ENEMY! to attack so her Special will activate on her second attack. (Unless you went for Moonbow, you crazy candy Hunter! Which might not be the best idea really... Explained the reason above)
Taking this build into consideration you are likely to want:
*Mobility: You can get this by using a Dancer, Armor March-ed units like Amelia, or an unit with a really good assist skill such as Reposition, Smite, Shove... Up to you!
*Buffs: Tactics, Waves or any other skill you can use to increase her stats is extremely appreciated.
*Healing: Despite she is a good Brazen user she might need some HP in order to survive most of the hits she&#039;ll be taking during the battle so a healer will be really useful in order to help her survive, just be careful so the Brazen won&#039;t deactivate.

Finally, Id like to thank you for reading whole mess, my writing is poor but I wanted to contribute my build, it might not be the best, it also might have lots of flaws or it will not even be read but... I put all my effort and heart to every single word so... Yeah, thanks and...
Happy Halloween!!!
Feliz Halloween!!!
Feliz Día de la canción criolla!!!