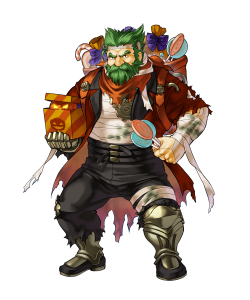 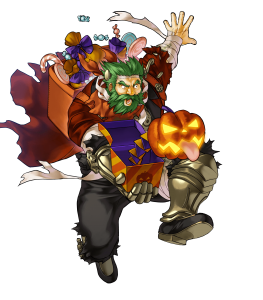 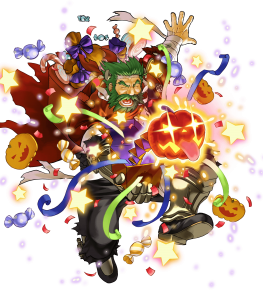 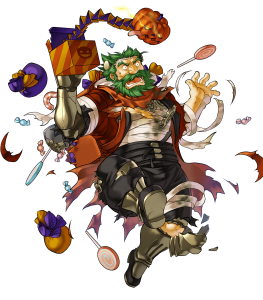 Dozla is blessed with at least respectable stats in every category. The good news here is that this makes the Harvest Attendant extremely flexible in terms of Assets—even Speed has its defensive and offensive applications at any level of investment. Consequently, the preferred IV diagram may be misleading visually. On the gummier side of things, however, there is no clear Flaw to take if leaving Dozla at zero merges and you don’t especially have a build in mind. At the very least, Dozla’s Attack and Def should ideally be kept pristine.

Rennac is probably busy looting some poor grandmother's house this Harvest Festival, so Dozla's here instead to accompany his lady L'Arachel in a quest to spread joy, candy, and general doohoolery to the masses. Our resident Harvest Attendant resides in a rare category as an armored dagger user: his only competition is the freely available (and also technically seasonal!) Winter Cecilia as far as colorless heroes are concerned. While this quite bites a bit as Dozla himself is obtained only seasonally and much of what he can do can be done by Cecilia, he sports quite a few tricks himself inside that jack-in-a-box.

Dozla is overall an effective, multitalented individual thanks to his movement and weapon type. With access to assets and a base stat total of 174-175, Dozla boasts quite better room to distribute numbers than prior competition. In particular, he boasts an extremely excellent base Attack paired with also-awesome Defense and, oddly enough for his archetype, decent base Speed. His only real sort spot is his Resistance, which is also pretty sufficient at base and can definitely be invested further with effective results.

Additionally, being both an armored and dagger-wielding unit gives Dozla quite a number of resourceful and powerful tools. His access to the Fighter skill line as well as a vast and colorful number of daggers simply demonstrates how strong but flexible L'Arachel's servant is. As a result, he sidesteps a number of issues typically found on his similars, which are frailty, lack of versatility outside of offensive builds, and extreme vulnerability to follow-ups from average-Speed enemies.

Though Dozla's seasonal status, competition, and vulnerability to some hard counters (such as Null Follow-Up users and hard Resistance-hitting pressure), his access to great tools and overall effectiveness as a fighter can spook even the fattest of competitive giants in the game. Indeed, don't let his wacky looks fool you; in his quest to bestow treats among the people, he, too, will definitely treat you well given reasonable investment (and a few juvenile japes about a certain thief while you're at it).

In addition to offering quite decent base scoring potential in Coliseum modes, Dozla's stat total of 174 certainly gives a lot of room for optimal distribution, and Dozla clearly does this well with minimal complaints.

A standout in Dozla's statline, a base Attack of 38 is exceptional among ranged physical units and facilitates in solid damage output against many existing units in the game. It even benefits from a superasset, a potential increase to 42 being ever-deadly across all builds.

Dozla isn't asking for much more in the physical tanking department thanks to his base 45 HP and 35 Defense, giving him a total of 80 physical bulk (excluding refinement and other skills). His remaining stats don't totally suffer for this either; 29 base Speed is odd but sits at an excellent defensive value (making him less susceptible to follow-up attacks from average Speed units), while 27 Resistance is still quite decent considering his archetype and previously-mentioned stats. As a result of both of their starting values, these stats are also open to dedicated investment to cover for potential weaknesses or utilize completely different builds.

As a dagger-wielding unit supported by great offensive and defensive stats, Dozla's repertoire of colorful, useful weapons has nearly no end. This list includes but is definitely not limited to Barb Shuriken, The Cleaner, Starfish, Smoke Dagger, Cloud Maiougi, Lethal Carrot, and his own native Pumpkin-a-Box. Dozla also profits from certain outsourced support skills that aids daggers in particular, such as Brave Lucina's refined Geirskögul.

Dozla being armored gives him access to the ever-fantastic Fighter skill line. In particular, he utilizes Special Fighter and Bold Fighter exceptionally well considering his strong line of weapons. Thus, he can easily run offensive and defensive builds, and virtually anywhere in-between depending on stat investment. Other armor-exclusive plusses, including benefiting from buffs such as Ward Armors, only sweeten the deal further.

Limited seasonal availability not only makes Dozla difficult to acquire outside of his respective summoning event, but being time-locked for long periods of time he may be susceptible to powercreep despite how powerful he is himself. Winter Cecilia may also be a more compelling choice in players' eyes due to being freely available from Heroic Grails.

Only Adequate Speed and Resistance

Dozla's Speed and Resistance are quite plenty by his archetype's standards, but if left uninvested, their only adequate values leave him vulnerable to strong Resistance-hitting threats as well as follow-up attacks in general.

Dozla's movement class and lack of color advantage to fall back on leave him quite open to heavy damage or outright one-shot KOes from the likes of Brave Micaiah's Light of Dawn, Halloween Hector's Conjurer Curios, and other enemies with generic armorslaying weapons. Additionally, being regularly limited to one space, Dozla cannot enjoy the luxury of regular movement without benefitting from Armor March or other methods of enhanced mobility.